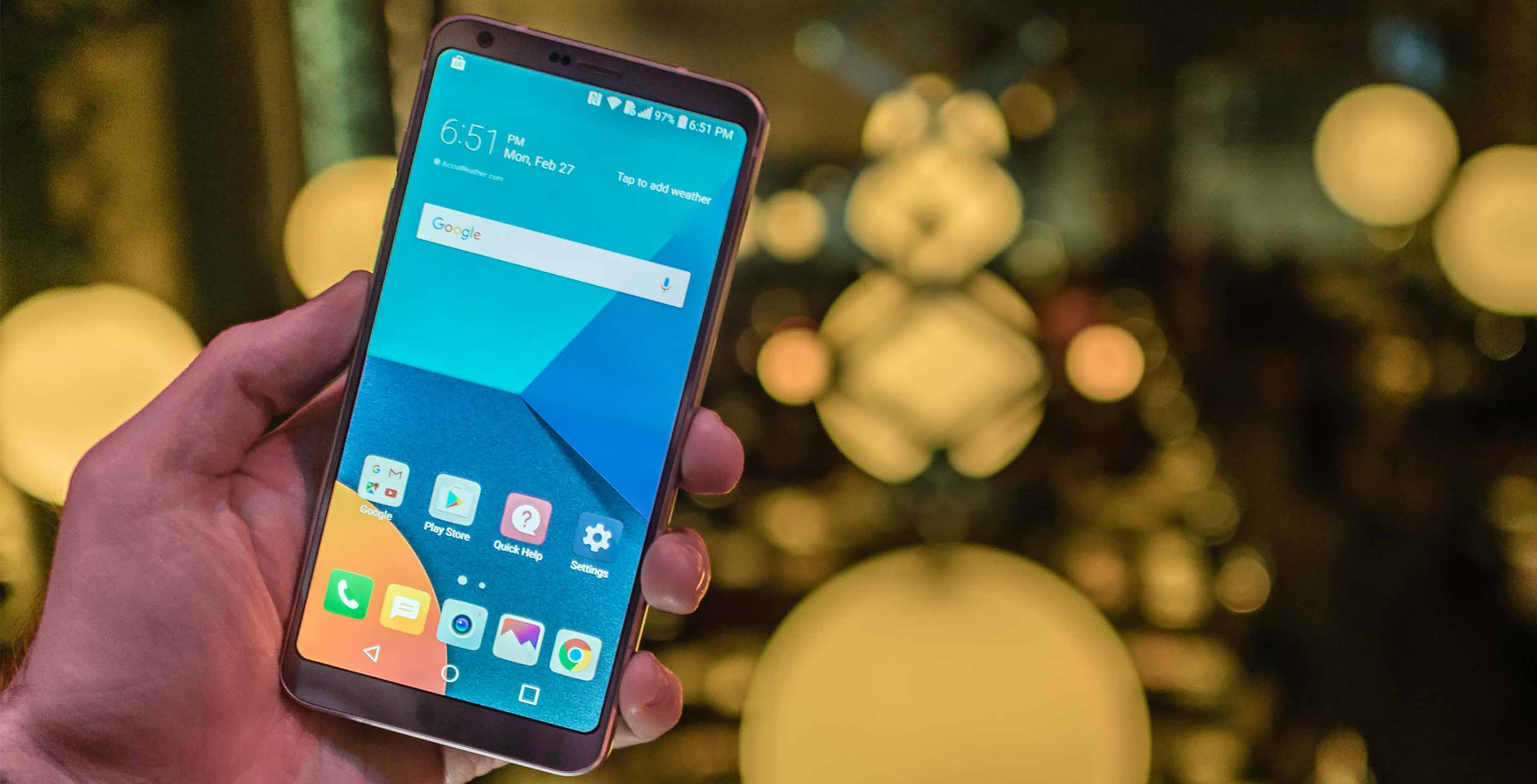 Going hands-on with the LG G6 feels a lot like seeing a high school acquaintance the summer after grade nine. They’re nothing like you remember them, in large part because they left behind what made them unique to fit in and conform.

In the case of LG, the company’s decision to retreat from the features that made the G5 unique is understandable. LG’s 2016 flagship was not a success by any metric. However, to stretch an already thin analogy, a lot of the changes here are superficial and don’t necessarily address the shortcomings that made the G5 a less than stellar device.

But let’s start with the positives. The G6 is the first smartphone to support both Dolby Vision and HDR10. Forget for a moment all the talk about this smartphone’s ‘FullVision’ display, LG’s decision to manufacture a smartphone that supports HDR, in both its current and competing variants, is the most significant and welcome change to come to the company’s flagship smartphone series. 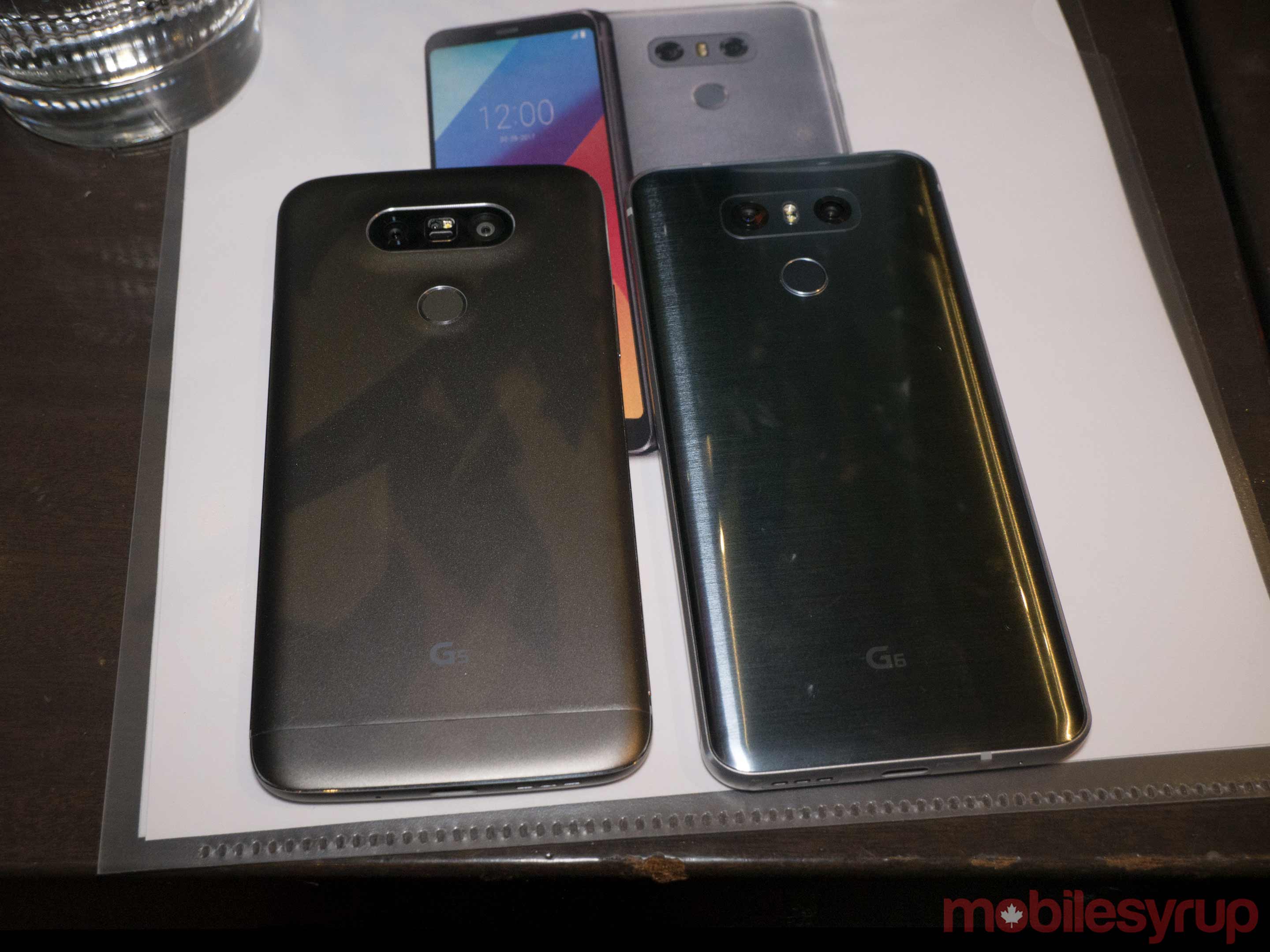 In a word, the G6’s IPS screen is beautiful. Colours are faithfully and stunningly reproduced. My colleague Rose Behar placed her Pixel next to the G6, and after comparing the two devices, it was difficult to look at Google’s flagship in the same light.

However, like the S7 edge’s curved display functionality, I didn’t find the software functionality LG built to take advantage of the G6’s 18:9 display particularly useful. For instance, it’s great that Android Nougat’s split-screen multi-tasking feature works best when paired with the G6’s 18:9 screen, but I never found that feature useful on a smartphone. Thankfully, most of these features can be safely ignored.

32GB storage, with microSD for expansion

Modulars: LG Cam Plus & LG Hi-Fi Plus with B&O Play

32GB storage, with microSD for expansion

Modulars: LG Cam Plus & LG Hi-Fi Plus with B&O Play 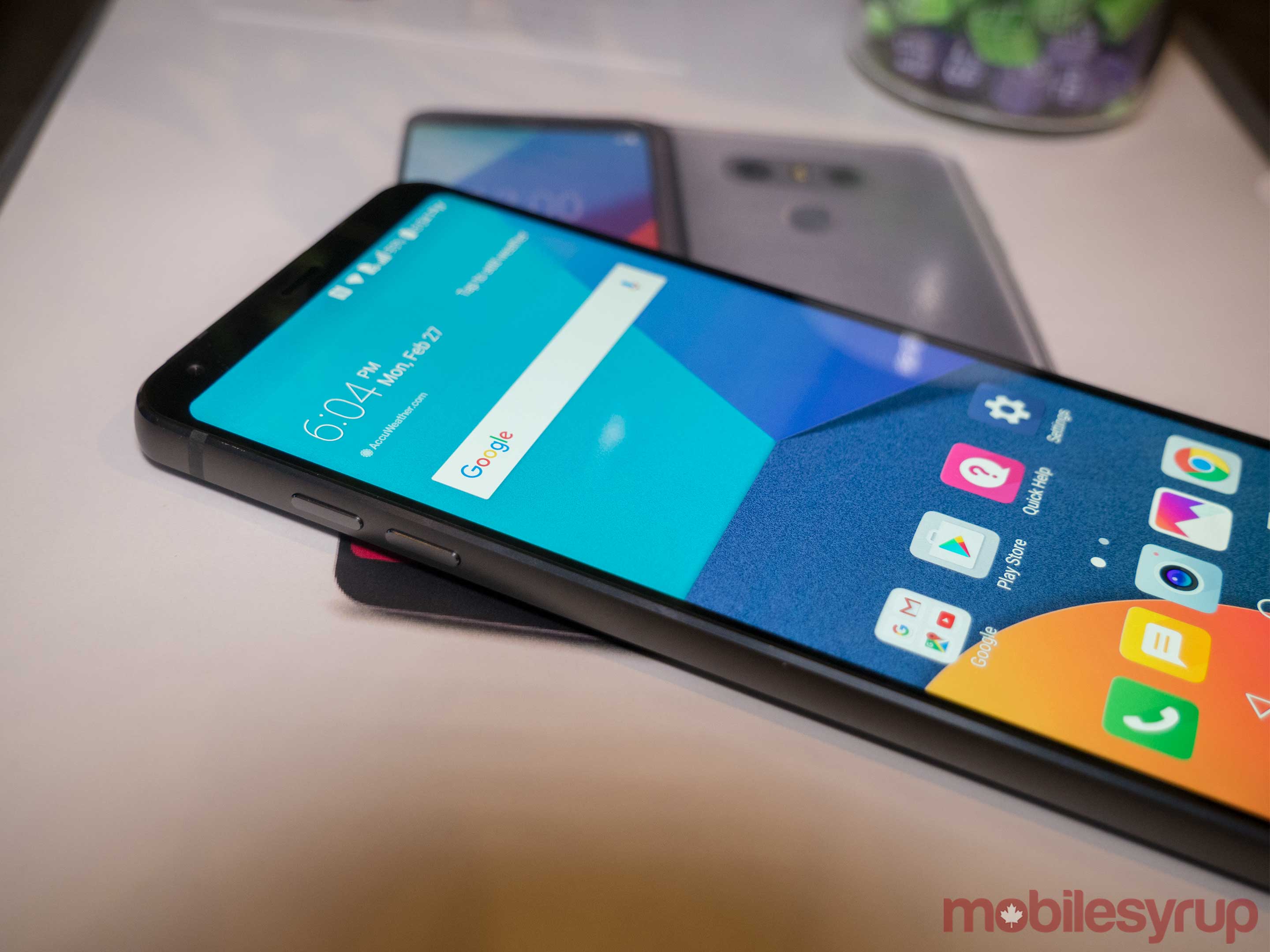 That said, I did appreciate that the G6 manages to add a larger screen, with barely there side bezels, without changing its footprint significantly.

Even with its larger screen, the G6 is virtually the same size as its predecessor. However, build quality, while improved in comparison to the G5, still feels like a step behind what Samsung has been putting out over the past year.

The two colours the device will be available in Canada, Ice Platinum and Astro Black, didn’t stick out to me as particularly aesthetically pleasing. Moreover, I found both finishes quickly became smudged with fingerprints after only limited use. 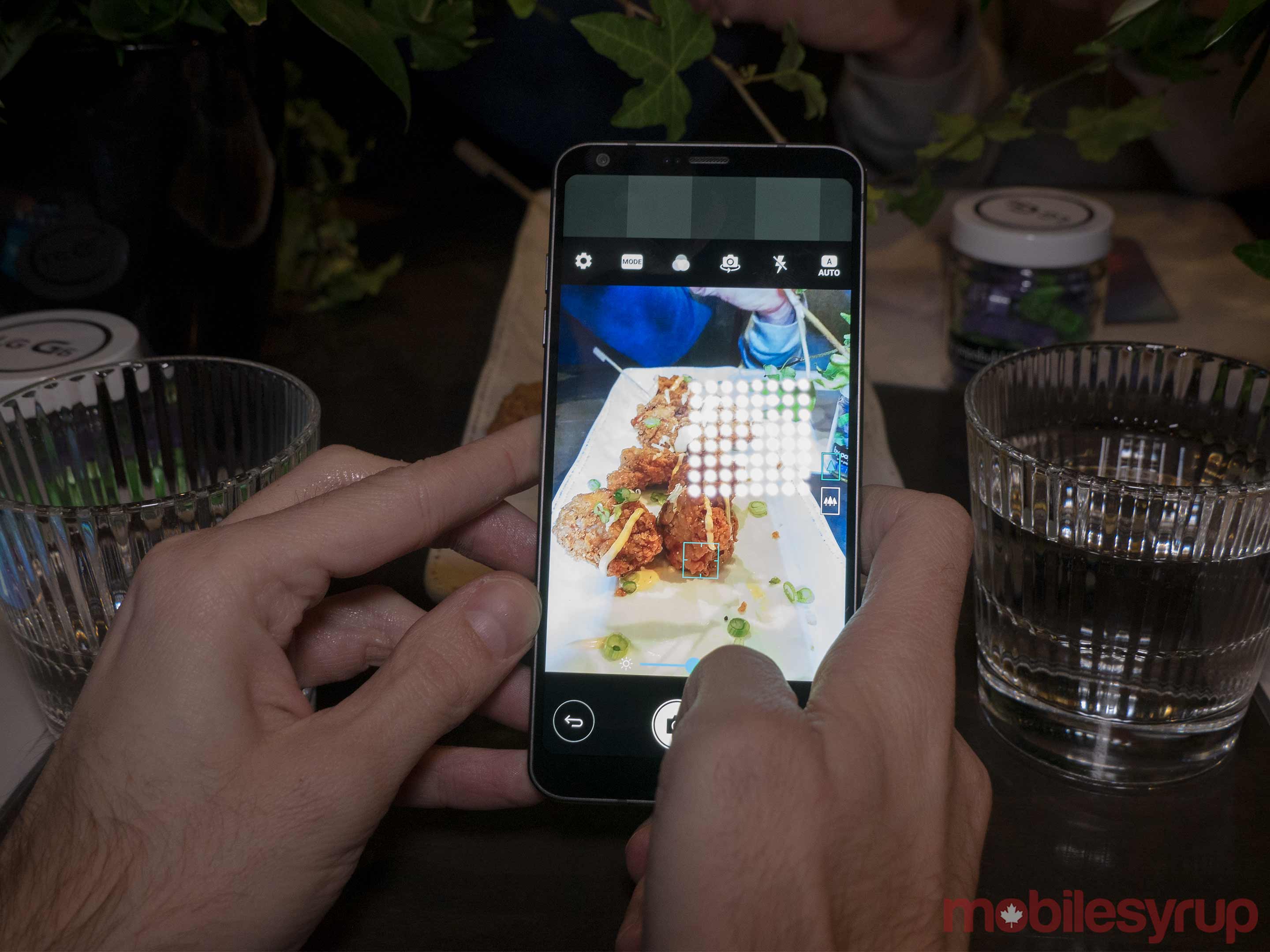 It’s when I came to the G6’s camera that the experience fell apart for me.

LG spent a lot of time of talking up the G6’s improved software-related camera features like the new ‘Square Camera Mode,’ which allows users to take advantage of the phone’s 18:9 display to snap and review photos simultaneously, but in the areas where the company could have made meaningful improvements to camera performance, the G6’s camera felt more like a lateral move than a significant upgrade.

In terms of actual hardware refinements, the most noteworthy change here is that LG reworked the G5’s dual camera array to include two 13-megapixel sensors instead of one 16-megapixel sensor and one 8-megapixel sensor. Given that most will use the G6’s wide-angle camera to capture sweeping landscapes and architecture, the extra megapixels will make for more detailed photos. It’s a sensible choice, if nothing else. 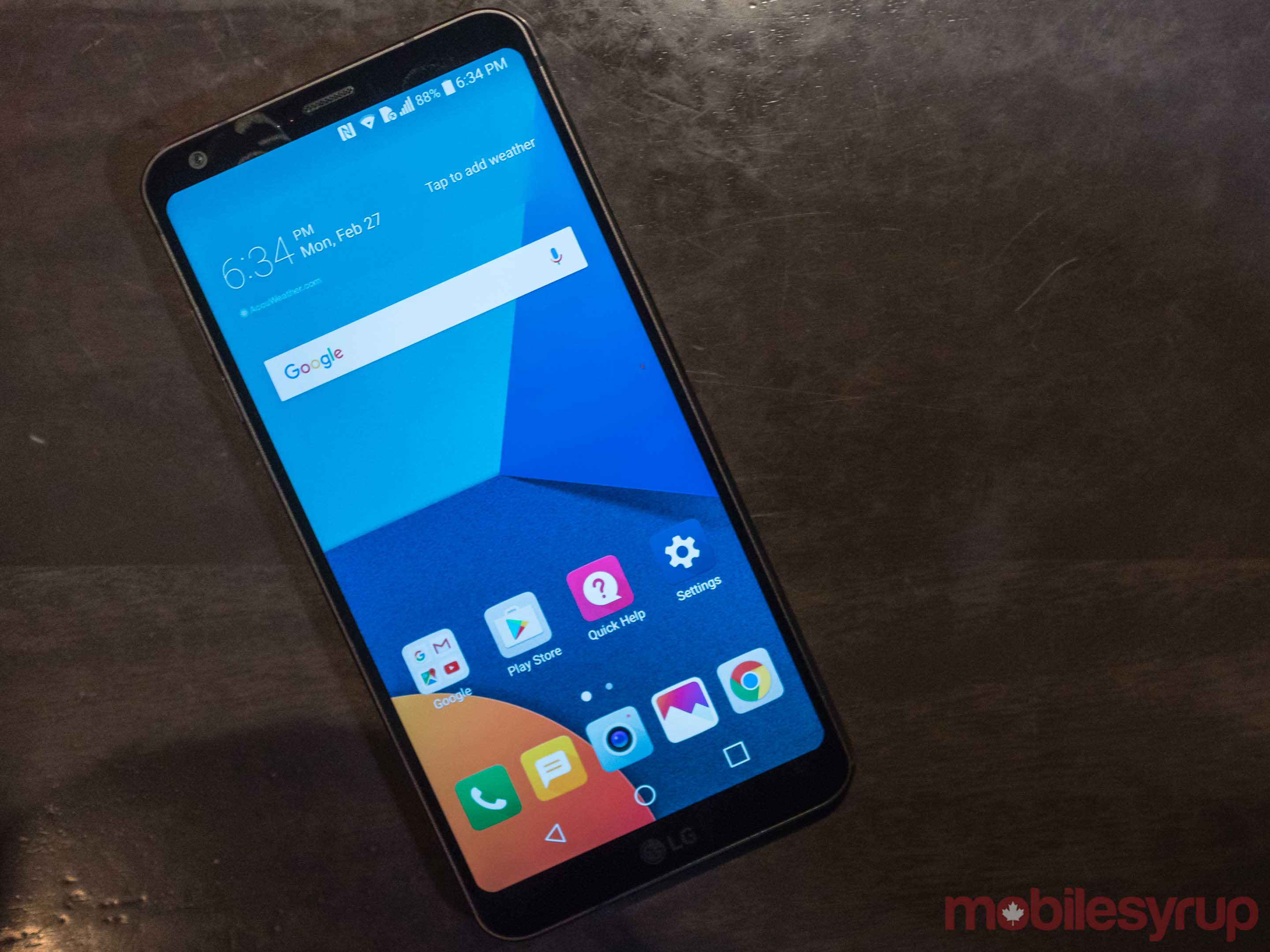 However, when it came to autofocus and noise performance, as well as sharpness, the G6 didn’t feel like a major improvement over the G5.

Granted, we were asked to snap photos in a dark and moody restaurant. In this situation, the G6 performed about as well as one can expect. Auto-focus performance was abysmal, with the phone spending several long seconds attempting to acquire a lock on a desired subject. When I finally managed to snap a picture, the resulting image was grainy and washed out.

Center sharpness was excellent, but there was a noticeable drop-off in image quality towards the corners of an image. Moreover, every single photo I snapped came out grainy, with significant luminance noise apparent throughout. 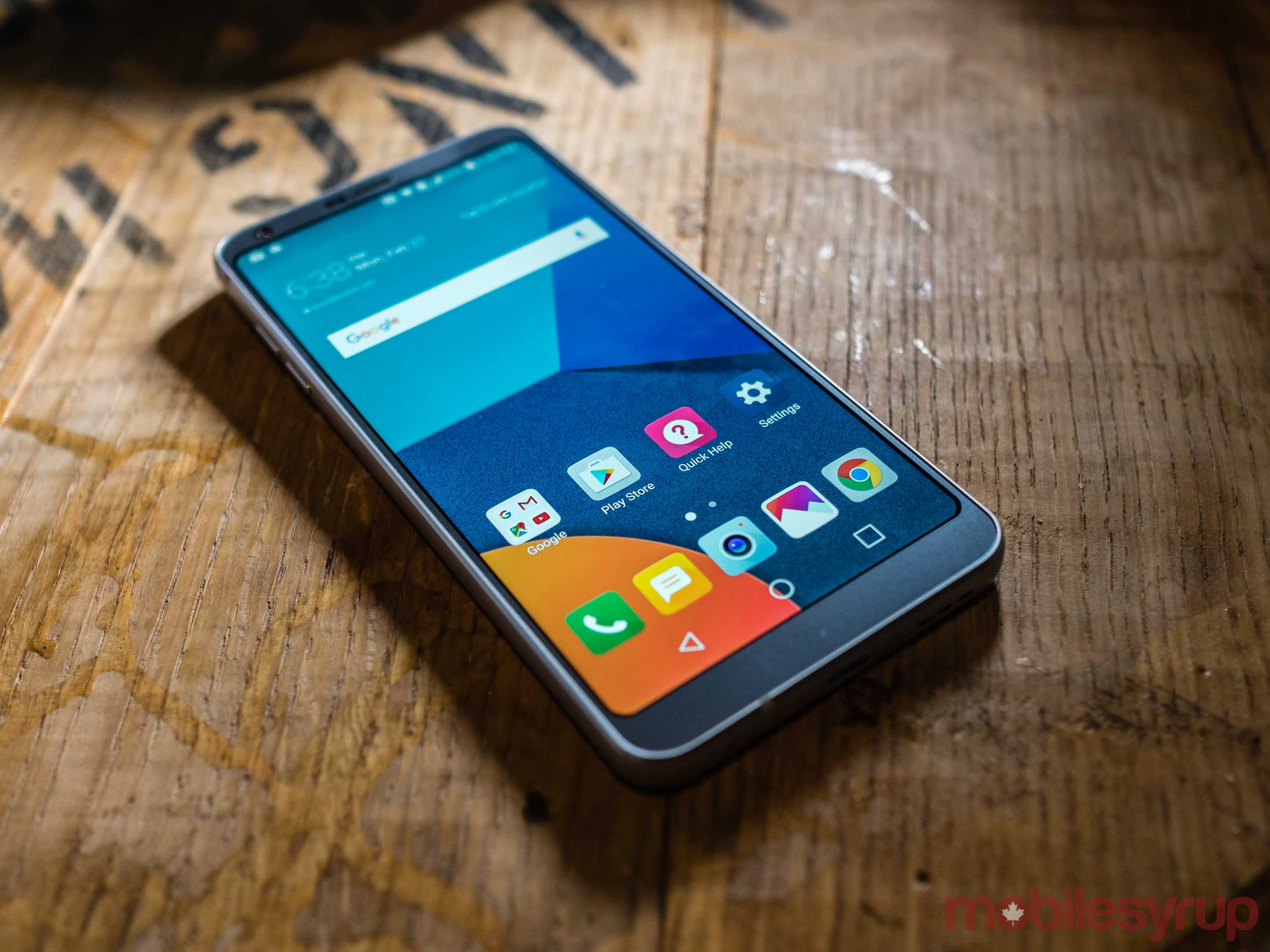 One area LG has made significant strides is in its overall software package. The company’s UX 6.0 Android skin is still mostly unattractive, but there are bright spots. With Android Nougat, LG’s engineers have given UX 6.0’s notification shade and settings menu some much-needed attention. Both look better and are easier to use.

Still, there are some curious choices. For example, the G6 will ship with Google Assistant pre-installed. However, Google Now is not accessible by swiping to the left most part of the home screen. 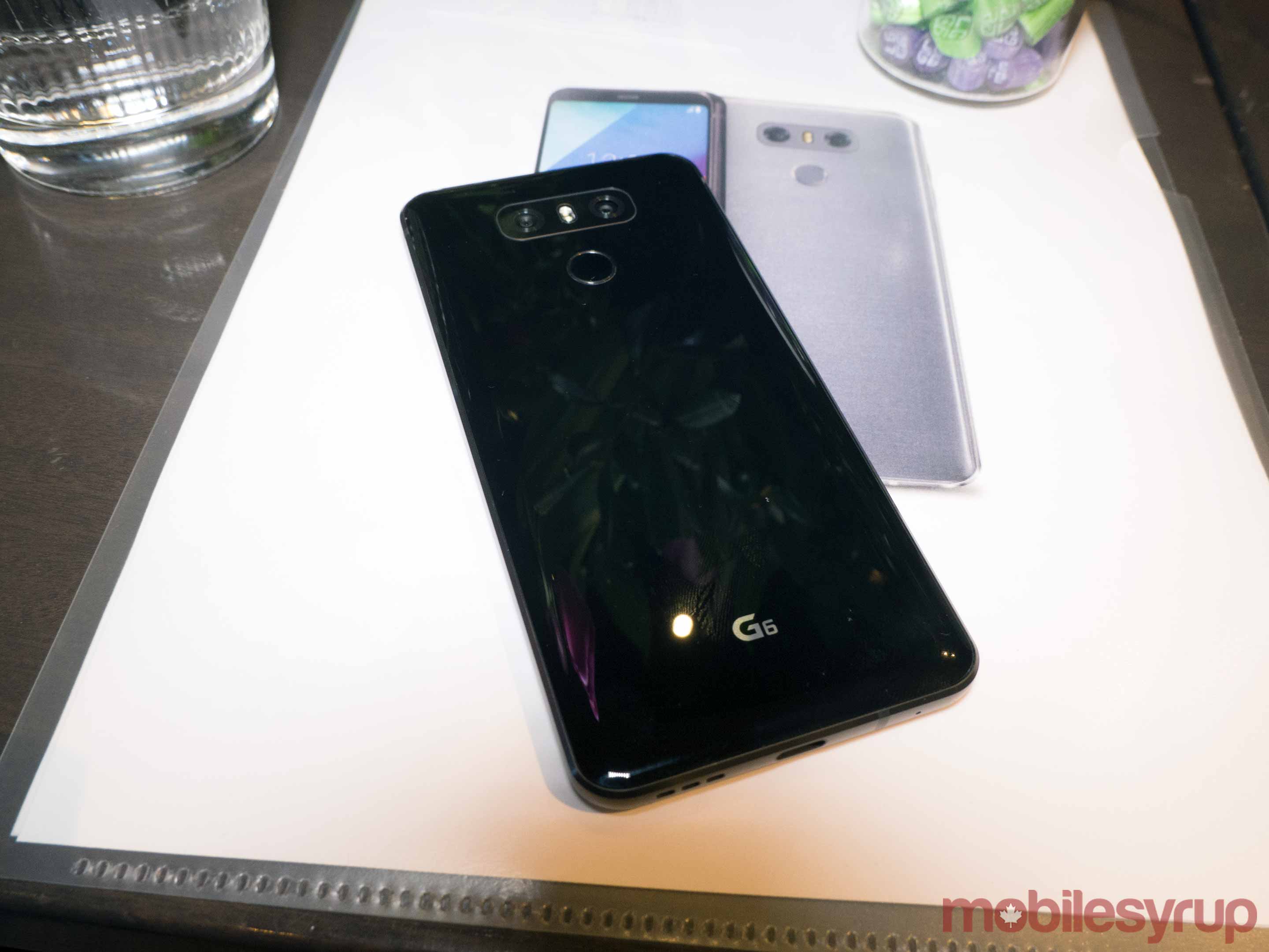 Overall, I think the G6 is a significant improvement over its predecessor, but it still feels like LG is playing catch-up to the competition even as it surpasses it in certain regards. Granted, I only had limited time with the phone, but it did not feel like the complete package one expects from a modern flagship.

One additional thing to note is that the Canadian variant of the G6 will not come with a 32-bit HiFi Quad DAC. It will, however, support both Qi and PMA wireless charging. In Canada, the base model comes with 32GB of storage, not 64 GB.

LG will release the G6 in Canada later this year. The company has not finalized details relating to pricing and carrier availability. 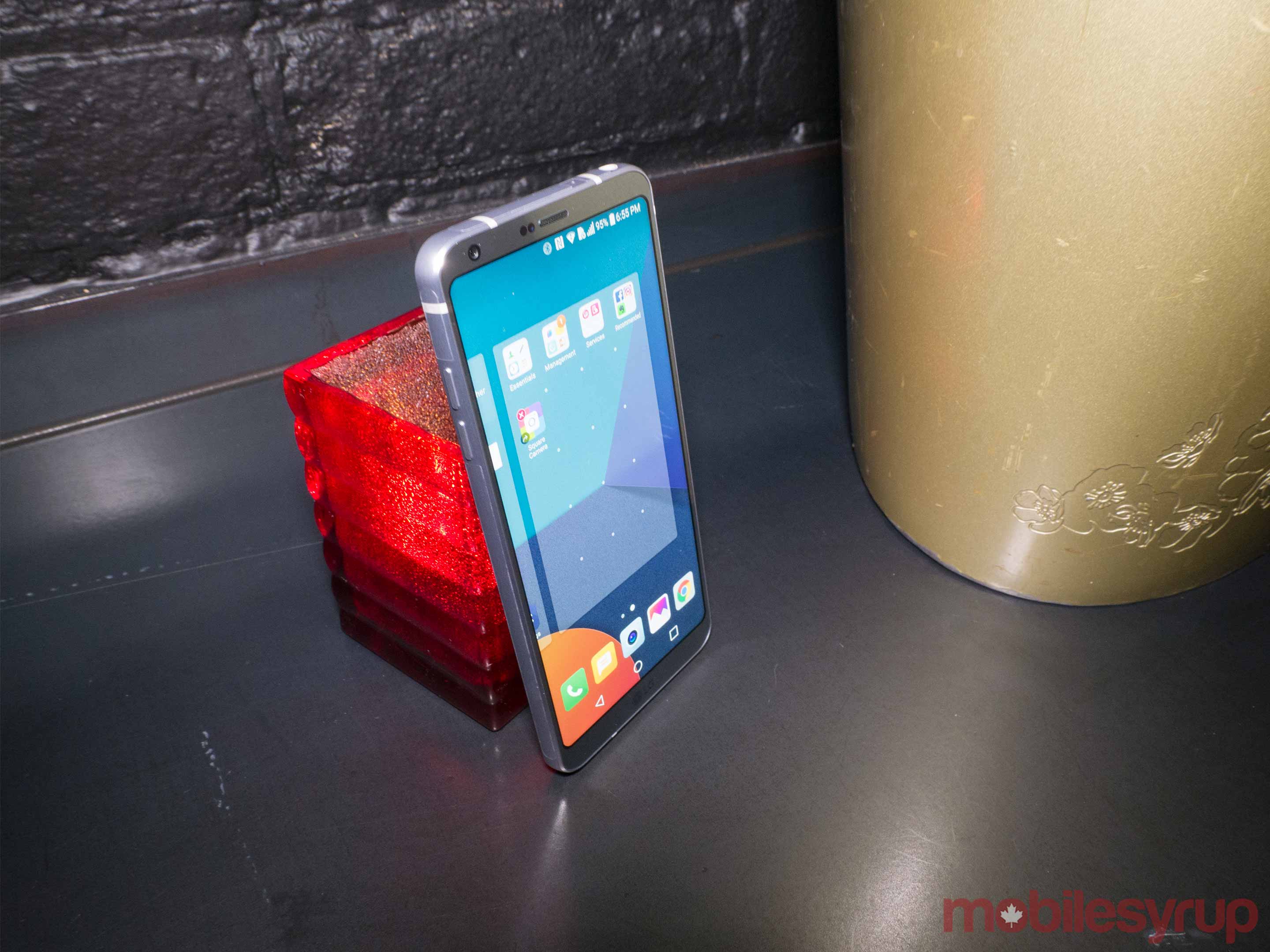 Following last year’s disappointing, modular, G5, it makes sense that LG has opted for a back to basics approach with the G6. The company seems to have the goal of releasing a device that checks all the correct boxes. While we only spent a brief amount of time with the phone, my early impressions of the device are positive, save for a few issues.

Build wise the G6 is a sleek looking and feeling smartphone. It’s rear, however, is glossy, which, for anyone fond of clean looking, smudge free smartphones, could be an issue. On the plus side, the G6 is IP68 water resistant now that it features a full unibody. Fans of the G5’s removable battery, however, will be disappointed.

Unlike the G5, the G6 feels like a complete device thanks to its rounded corners and beveled edges. I’m also a fan of its 16:9 aspect ratio, making the phone’s 5.7-inch display feel smaller than it actually is, though I do question how many apps will be optimized to take advantage of the screen size. It’s also great to see that LG has opted to support both HDR10 and Dolby Vision, the two high dynamic range formats currently battling it out for colour rich dominance. 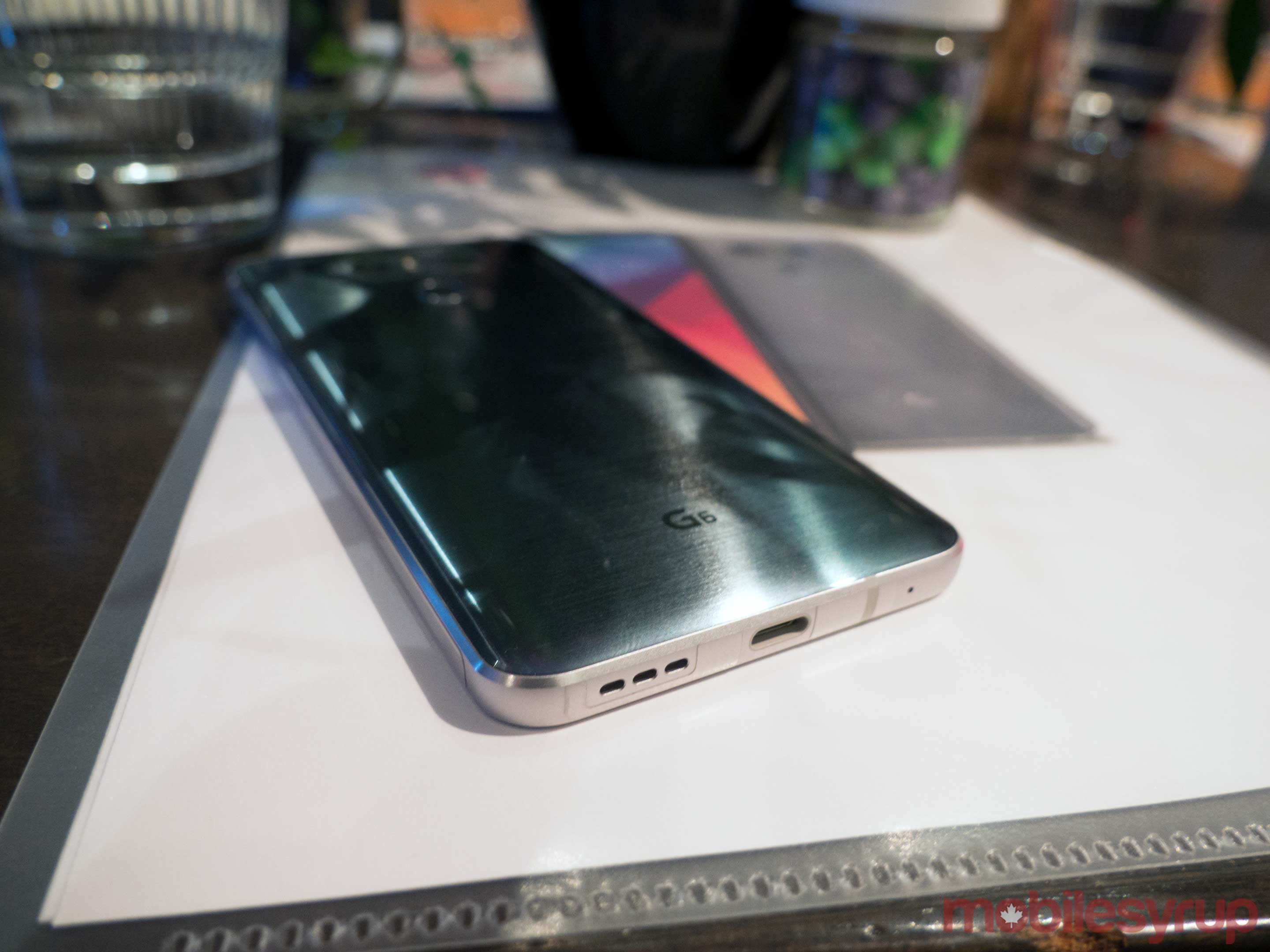 When I get a hands on a review unit of the G6, I hope to test the phone’s camera thoroughly. It’s great that the wide-angle lens in the G6’s dual-lens shooter now features 13-megapixels, just like the G6’s regular camera, but I’m disappointed by how slowly both lenses focused, especially under low-light conditions.

It’s also a significant issue that the G6 doesn’t feature Qualcomm’s Snapdragon 835 and instead is opting for the 821. LG blames supply issues and its manufacturing timeline, but the lack of the 835 makes the G6 feel like a glossy, high-end device, hindered by last year’s processor.

This issue is compounded by the fact that the S8, as well as a number of other smartphones that will be directly competing with the G6, are set to feature Qualcomm’s latest processor.