While The Void’s Ghostbusters: Dimension VR experience is one of the most engrossing examples of virtual reality I’ve ever experienced, in some ways, it’s also disappointing.

At Madame Tussauds Wax Museum‘s Times Square location in New York, I had the opportunity to test out Ghostbusters: Dimensions, an often-touted virtual reality experience built by Utah startup The Void, in partnership Sony.

The goal of the virtual reality experience, which The Void often refers to with the buzzword “hyper-reality,” is to make the player feel like they’re part of the recently released Ghostbusters film. It’s also part of a broader Ghostbusters exhibit at Madame Tussauds that also includes terrifyingly detailed wax statues of the film’s actors.

In Ghostbusters: Dimensions, you, along with up to three partners, enter a staging area, where a Madame Tussauds employee helps you put on a hefty vibration vest and gives a quick overview of the game’s Proton Pack weapon. Next, you enter an elaborate stage located in a nearby room that mixes the virtual world with the real world.

Players capture virtual ghosts with their real world Proton Pack and can actually see other players in the game, as well as communicate with them. Unfortunately, I was paired with two players that didn’t speak English, so I was unable to strategize with my teammates, though communication was relatively clear. I frequently heard one of my companions cry out in astonishment as ghosts flew through her character.

As far as I can tell from my brief time with Dimensions, the experience is mostly on-rails, constantly pushing the player forward so time isn’t wasted, though I did have a small amount of freedom to look move around rooms. After all, The Void’s Ghostbusters experience is a theme park ride with hundreds of players moving through it on a daily basis.

What separates The Void’s interpretation of VR from standard high-end virtual reality headsets like the Vive, is that you’re actually able to feel the walls around you, sit in chairs and even sense being shot or touched by a ghost, thanks to the company’s vibration vest.

This is all possible thanks to The Void’s headset, which feels bulky, but also very similar to the HTC Vive, a haptic vest, a sophisticated tracking system, and a powerful computer strapped to your back. Contrary to what I expected, the computer actually doesn’t weigh very much. In fact, the backpack I bring to work on a daily basis is considerably more heavy.

In one portion of Dimensions, wind, presumably created by hidden fans, blows at your face as you edge along the outside of a tall skyscraper, and in another instance, mist shot against my face  in the real world as a ghost flew through me in the virtual world. It’s also fascinating to be able to interact with real world objects you see in the virtual world, creating an intertwined mix of physical and virtual I’ve never experienced before.

The Void, however, does have downside and limitations. Visually, the experience feels on-par with high-end Vive titles like Call of the Starseed, though at times, I feel like The Void was actually less stable. The virtual body of one of my companions in the experiences often contorted into strange positions for no apparent reason, drawing me out of the otherwise immersive game.

I’m unsure if my particular system was malfunctioning, or if these issues are just a regular issue with The Void’s tech as a result of it being unable to track the player properly. 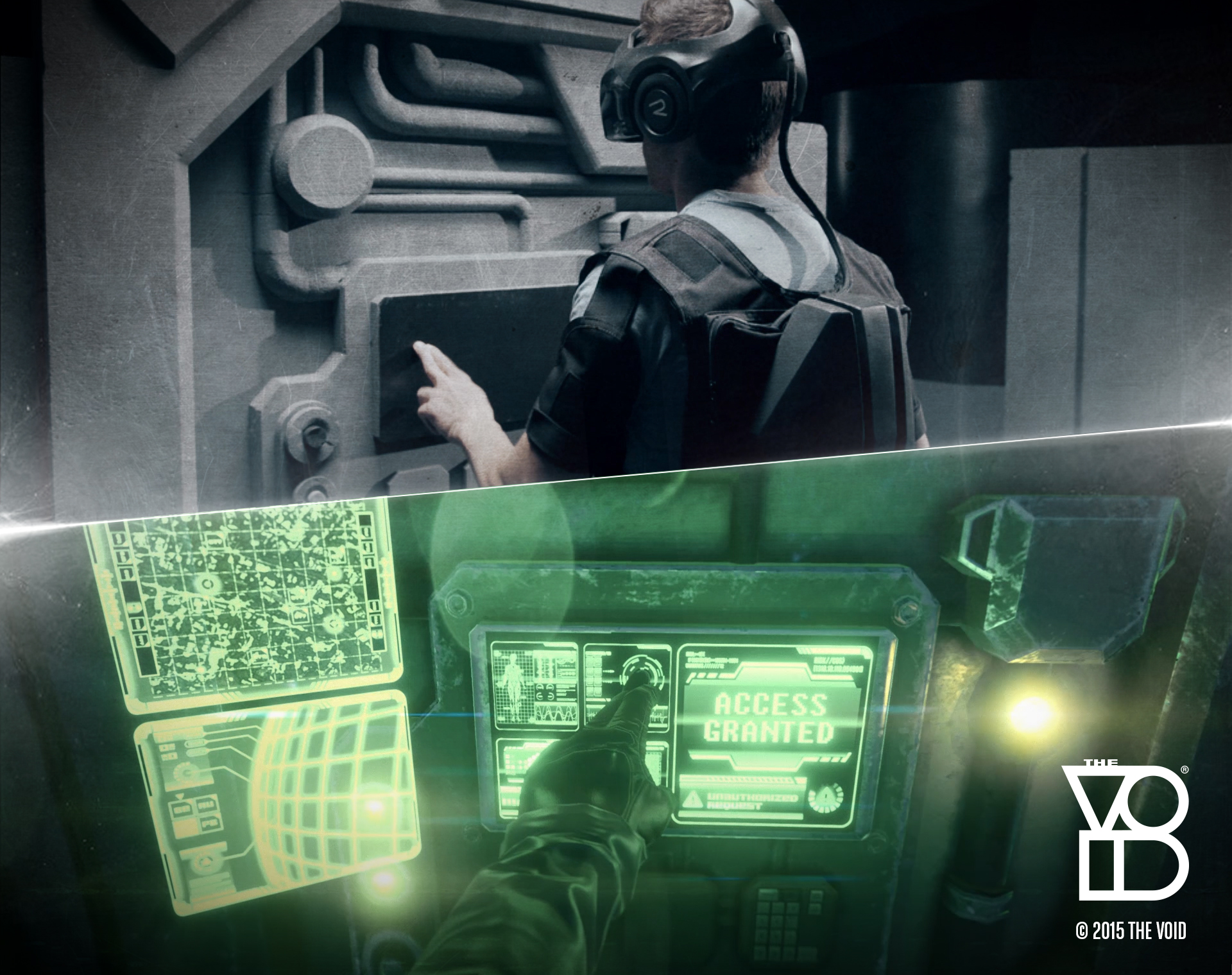 Also, given The Void only tracks the player’s weapon, as well as the direction you’re looking, it feels strange to not see a representation of your hands moving around in-game, like you would with most HTC Vive titles thanks to its dual controller tracking.

Where The Void gets things right is offering those that don’t own an HTC Vive, which is still pricey at $1200 plus the cost of a high-end PC, as well as anyone not familiar with the inherent concept of VR, a simple, intuitive introduction to the world of virtual reality. Above all, until high-end VR becomes more widespread and in turn, popular, experiences like The Void will be many people’s first encounter with virtual reality.

I will note, however, that the experience feels extremely short, something it seems The Void is actually aware of. Hopefully future “hyper reality” experiences created by the company offer a more lengthy experience.

@Patrick_ORourke @theMrMobile Great feedback! We scaled down on play time for optimal throughput, but LOVE longer stories & have plans 🙂

As far as first VR experiences go, The Void’s Ghostbusters virtual reality game is definitely worth checking out, especially for those not familiar with the burgeoning technology.

The only Void setup is currently at Madame Tussauds Wax Museum at Times Square in New York. On top of the fee to enter the Wax Museum, which costs $25.75 on the low-end, Ghost Busters: Dimension is priced at $49.97, though there are bundle deals available.

Note: I wasn’t allowed to take pictures before or during the experience, so we unfortunately are using screenshots of the game provided by The Void.