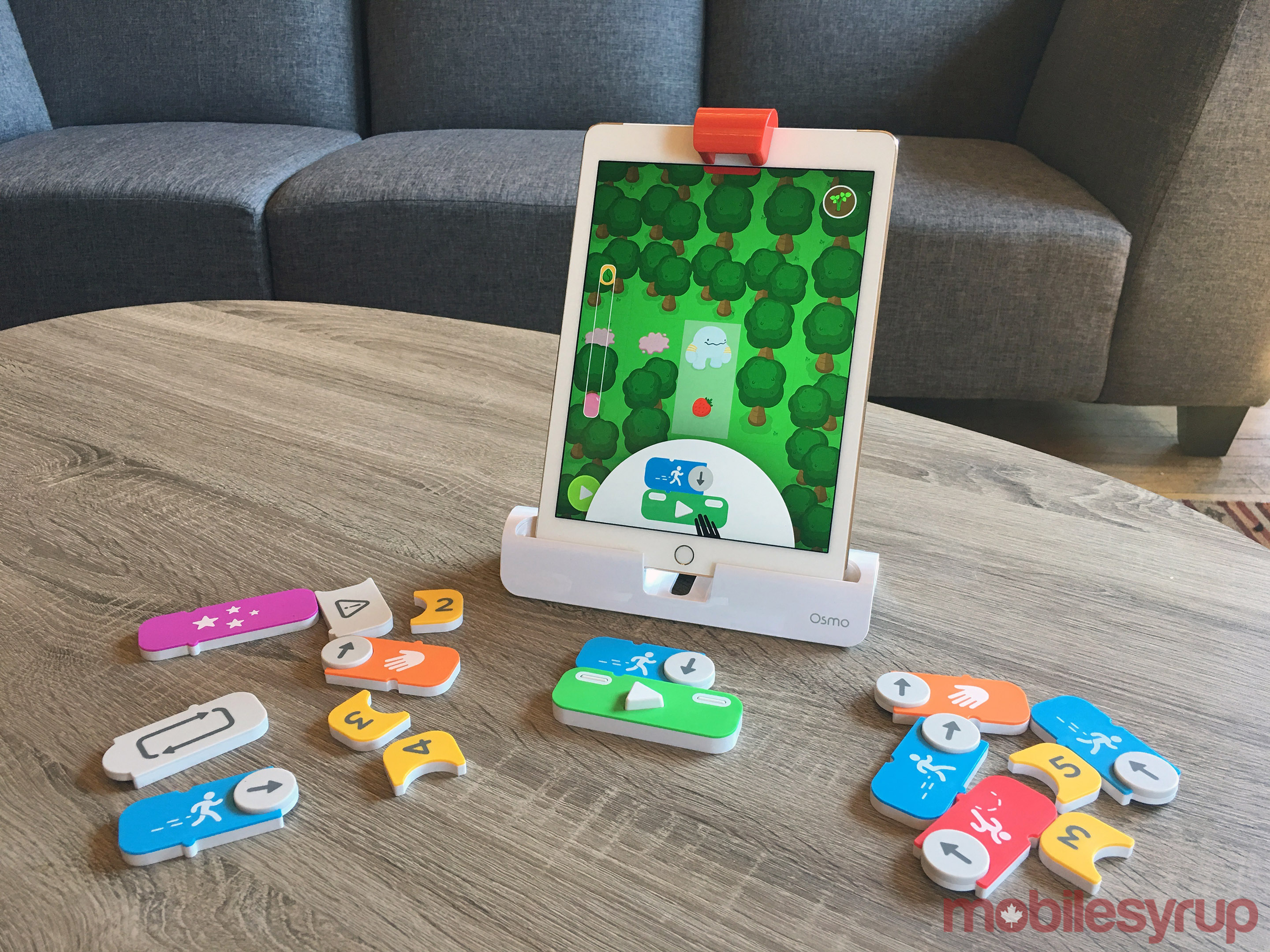 We all know how hard it can be to get kids to put down the technology and interact with the ‘real world.’

“When they play on an iPad or watch TV for a long time, you get that fear,” says Pramod Sharma, CEO and co-creator of Osmo, an iPad-integrated platform that mixes online and offline play, “It doesn’t seem right, they should be playing and using their hands.”

The Osmo platform was inspired by this pervasive, if distinctly modern, quandary. The non-electronic toy integrates with an iPad 2 or higher to create an experience that is a unique combination of technology and hands-on educational play.

In a setup procedure that is surprisingly simple for this day and age, all you have to do is pop the tablet into a plastic base and cover the camera with a special mirrored hood that repositions its gaze downward. Once that’s done, the camera uses optic technology to pick up on play pieces or images underneath it, translating them to the screen via specially created games and apps.

For example, Osmo’s latest set, released on July 28th and due to start shipping to Canada within the next two weeks for $69, brings the scribbles of young artists to life in a new animation game. 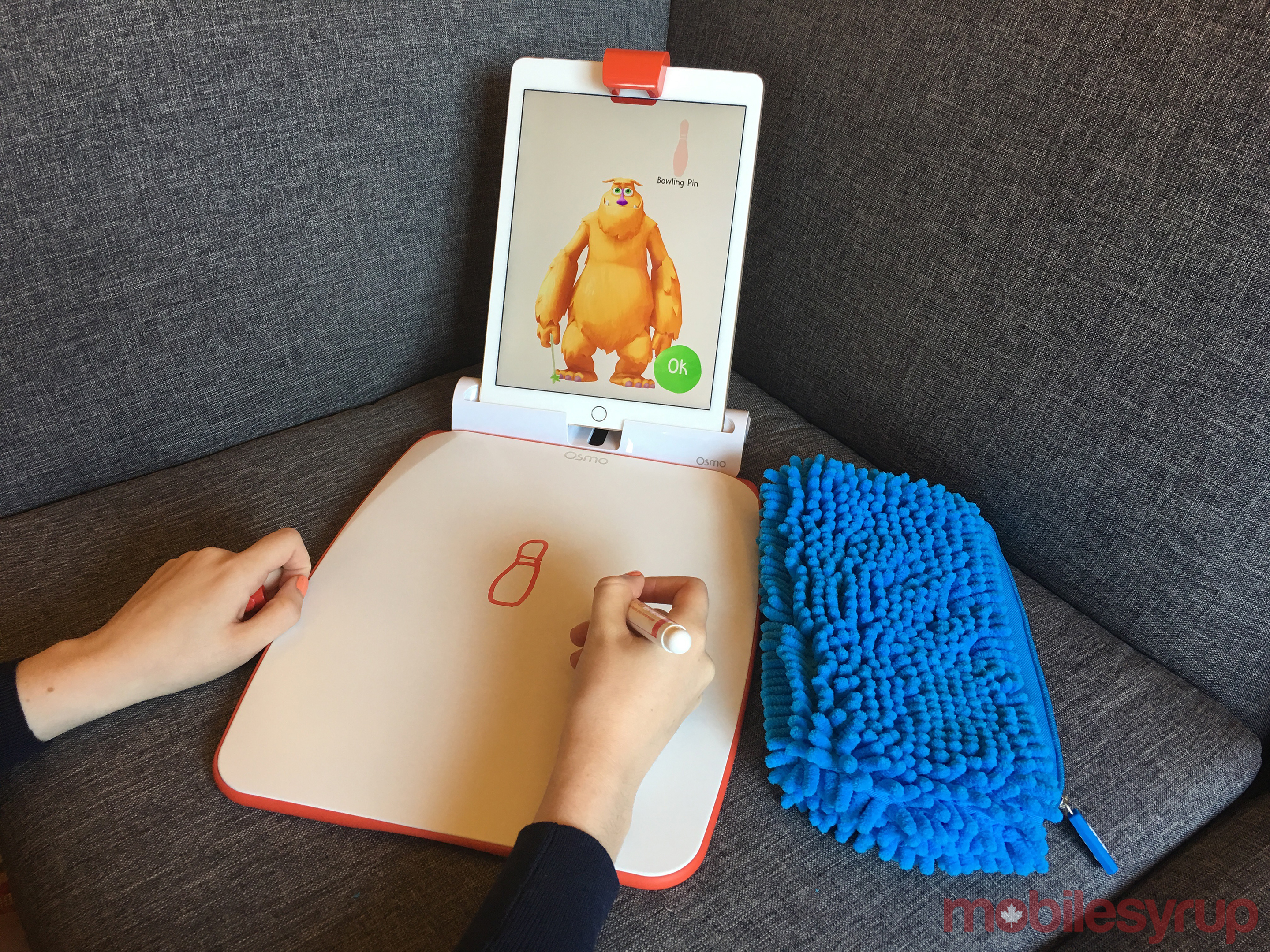 Osmo Creative Set allows kids to see the drawings they make on a whiteboard positioned underneath their iPad transferred directly into the game they’re playing.

Along with the new set comes an app called Monster in which a big fuzzy monster called Mo interacts with the child, challenging them to create different drawings that he then uses in a magic show.

While playing with the Monster demo the company set up for me during our interview, I was tempted to request a few more minutes to complete all the drawings for my magic show.

Though it’s a toy made for kids, it’s extremely engrossing, precisely because of the fascinating meld between a children’s pastime as old as humanity and today’s technology. The coupling was inevitable, yet Osmo is still working in a relatively unexplored space.

“Tech has yet to transform how children learn and create and collaborate,” says Sharma, “That hasn’t been done yet — not to the same extent as other industries.”

Osmo hopes to be one of the driving influences behind this new movement, and so far has found success in the field. From a core group of four, the company has grown to fourty over the last two years or so. It’s also secured accolades along the way, becoming one of Time’s Best Inventions of 2014, and a Scholastic Teacher’s Pick in 2015. Currently, the platform has been adopted in over 15,000 schools in 42 countries around the world.

Much of its success is no doubt due to the devotion to carefully considered product development and quality assurance, which is evident every time Sharma goes in-depth on minute details such as the white board’s edges, which are designed to be easy to grasp from any angle.

“This board we engineered over the last year,” he says, then adds with a self-aware smile: “some might say over-engineered.”

“All of the management team is Google,” says Sharma, “Four of us were actually working together at Google at some point.”

His co-founder Jérôme Scholler was on the Chrome team for two years after tenures at LucasArts and Ubisoft. Sharma himself spent eight years working with the Google Books team, architecting book scanning machines for digitization, which proved to be a major inspiration for Osmo.

“The insight that came from Books was all about offline and online. You start thinking a lot about why offline is interesting and why online is powerful,” adding, “There’s a way to build a third medium, and connect these two mediums. I always think of Osmo as trying to bring the power of hands and the tech together.”

When it comes to basic educational concepts there’s Tangram, which has children arrange puzzle piece shapes to match with what they see on screen; Numbers, an adding game that uses number tiles and Words, a spelling game that uses letter tiles.

Featuring a slightly more advanced concept, Newton is a physics-focused game in which players can draw or place objects underneath the tablet to guide falling balls into targeted areas.

Masterpiece delves in to the creative side of things by letting kids create their own easily traceable image templates. They just need to take a picture of an object or picture with their tablet, and the app will simplify it into a line-drawing that the child can then trace by drawing on a blank sheet of paper while watching their hands on-screen.

Then there’s the game that perhaps holds most relevance in the current zeitgeist: Coding. Released in June 2016, kids click together magnetic code blocks in to programming sequences that are read and used to navigate another adorable monster through woodland obstacles.

It could be compared to a physical version of MIT’s online Scratch platform, and also bears a striking resemblance to Google’s Project Bloks coding education tool, which has kids snap together physical blocks to program devices such as toys or tablets over Wi-Fi or Bluetooth.

“Project Bloks is trying to do what we do, but we’ve done it,” says Sharma matter-of-factly, without a hint of animosity.

After all, he knows some of the team members who work on Bloks and in many ways appreciates the project as a validation of their hands-on model. Sharma does note that there’s an essential difference, however.

“They tried to build the experience electronically, and we built the experience optically, so that’s a big difference. There’s no Bluetooth, there’s no sensors, so we can build a very scalable experience very, very quickly.”

And scaling is just exactly what Osmo plans to do. Sharma says now that they’ve covered the basics like letters and numbers, the company’s going to focus on enriching its more advanced games like Coding and Monster, perhaps even combining functionalities in the future.