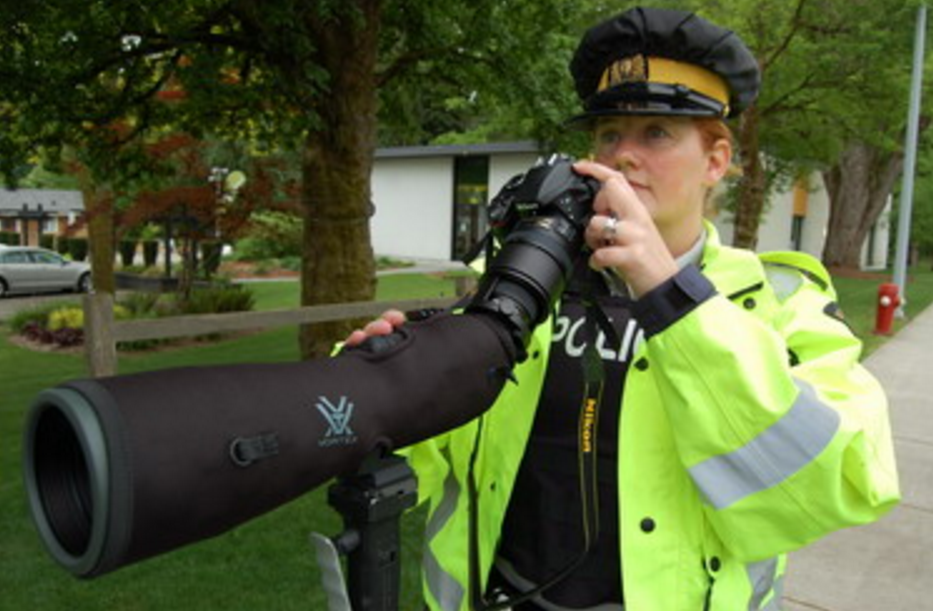 If you thought radar traps and aerial traffic monitoring were sneaky ways for the police to catch drivers breaking the law, we’ve got some bad news for drivers in B.C. this summer. While a typical camera used to prove wrongdoing in traffic might be placed near an intersection, the RCMP in British Columbia are using a set of astonishing zoom lenses to catch distracted drivers, starting this long weekend.

The RCMP are using a massive zoom attachment about two feet long, clipped onto a regular 24 MP camera with a 50 mm lens. The plan is to set up the camera far from an intersection and monitor drivers stopped at red lights, when distraction is easy to spot. With this zoom lens, RCMP will be able to see from up to about 1200 metres away, so drivers could get a ticket with photo evidence, and have no idea where police actually were.

The timing of this new enforcement method is not a coincidence. Constable Wutke cites the fact that at least 66 people were killed by distracted driving in BC last year, and the penalty for a first infraction will go up to $543 on June first. The RCMP also says that these cameras can’t always prove that somebody is using a smartphone or mobile device while driving, but officers can radio other patrollers closer to the scene to confirm illegal behaviour and tickets distracted drivers.

Last year featured a similar crack-down during the May long weekend in BC, and 199 distracted driving tickets were handed out over the three day period in 2015.