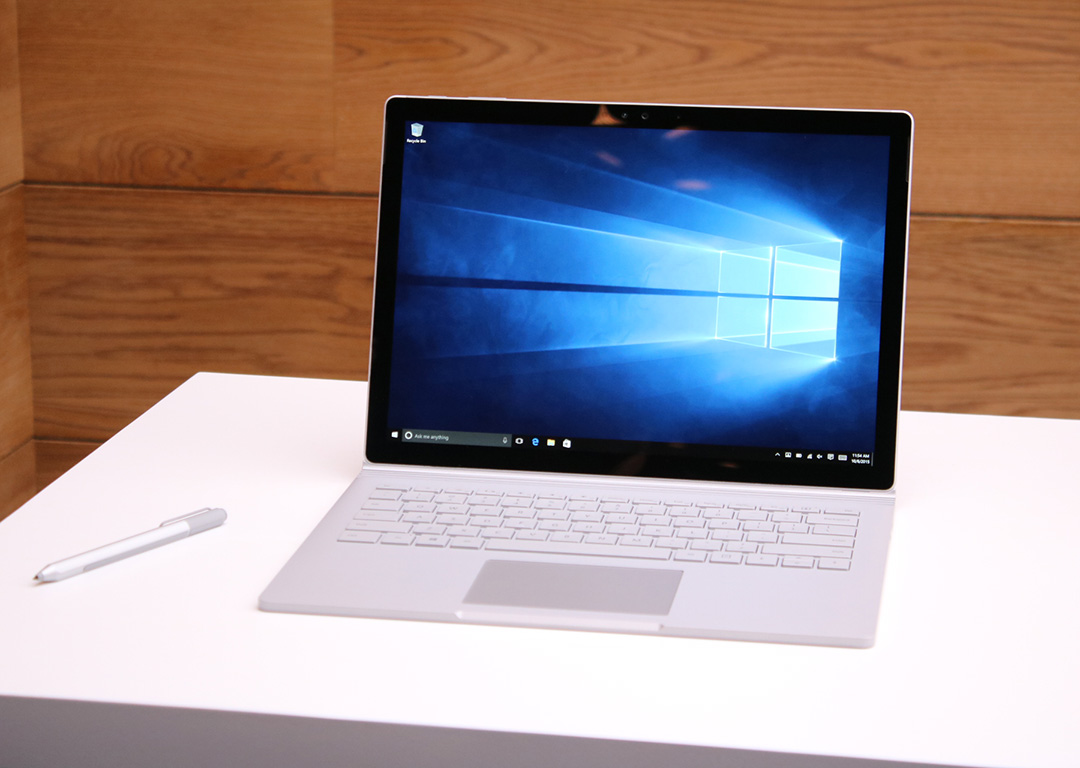 Microsoft’s upcoming Surface Book is by far the most interesting and most promising looking product the company revealed during its Windows 10 devices event in New York yesterday.

The Surface Book announcement was also essentially a complete surprise – the journalist in front of me audibly gasped when Panos Panay, who now leads Microsoft’s “premium” hardware division, initially revealed the laptop – with very little information leaking about the company’s latest attempt at laptop supremacy coming out ahead of its reveal, a rarity in the modern technology industry. 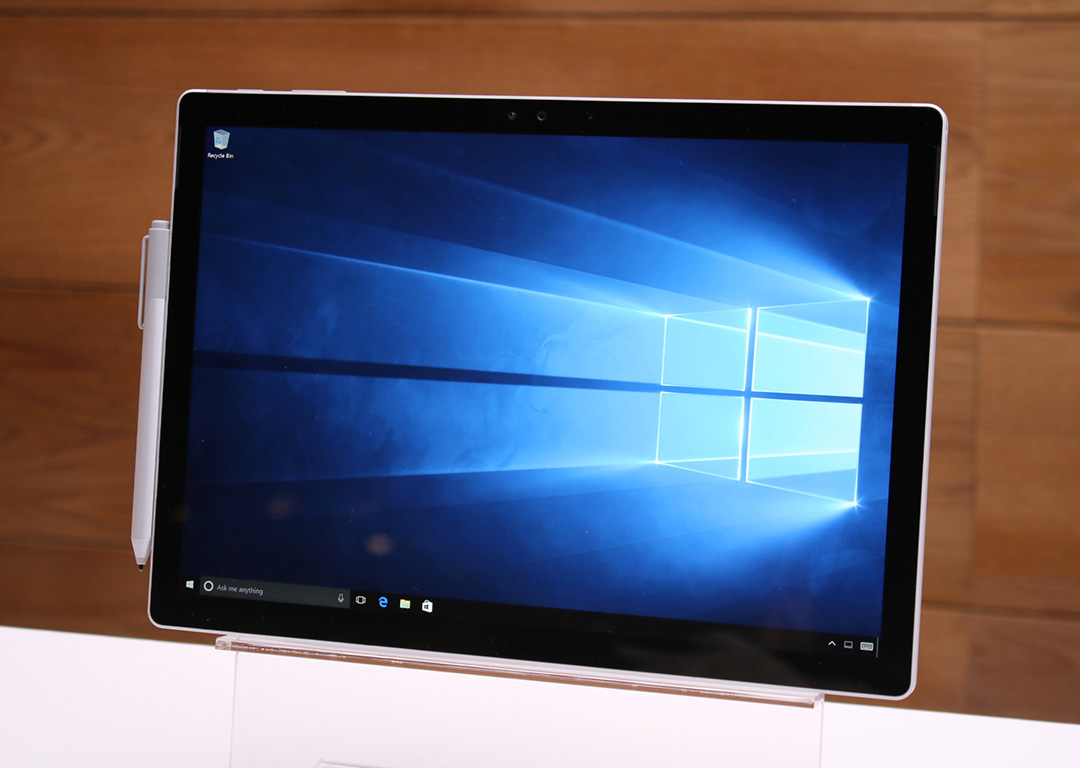 The Surface Book is part laptop, part Surface, and also seems to be an answer to many people’s complaints about the Surface Pro and Surface, especially when it comes to my own issues with Microsoft’s past laptop/tablet hybrid devices. 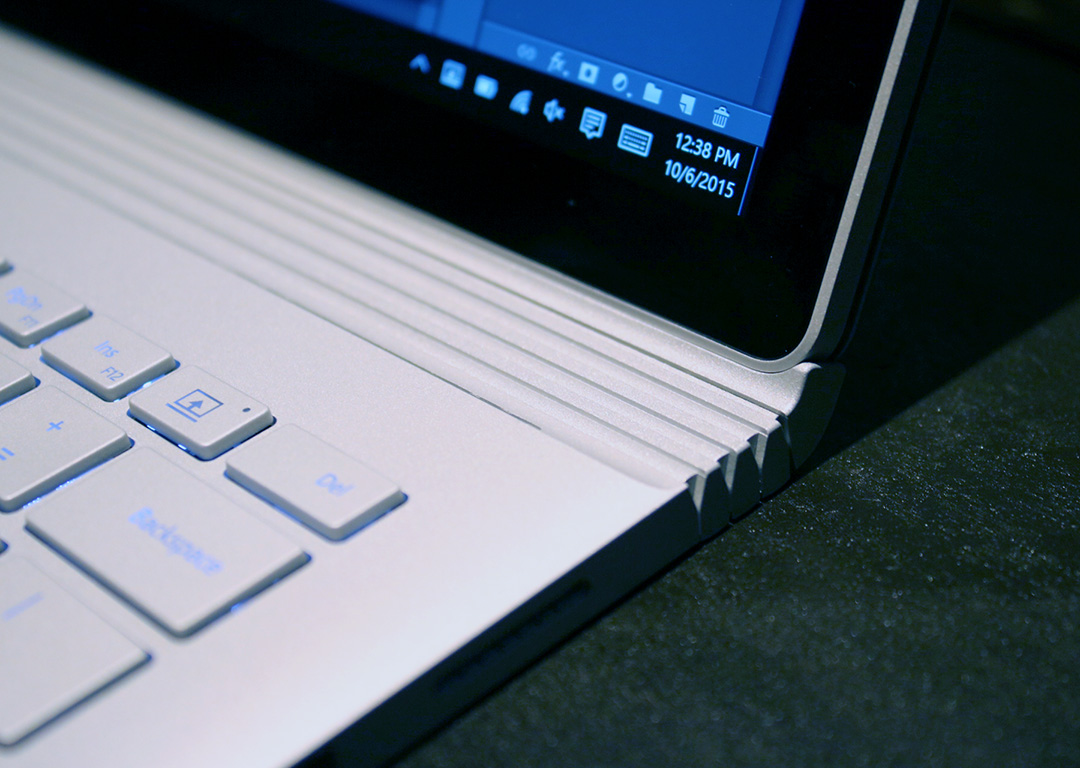 But before delving into Surface Book’s impressive technical specifications and reportedly high-performance capabilities, I want to discuss what I feel is the laptop’s biggest innovation, especially when it comes to the niche hybrid device market.

For me, the best thing about the Surface Book is its new hinge mechanism, which looks slightly off-putting at first and resembles the spine of a novel or text book. The new hinge allows the Surface Book to be used in a regular keyboard positions, as well as completely flipped, where the device’s keyboard is in a compact “clipboard mode.” 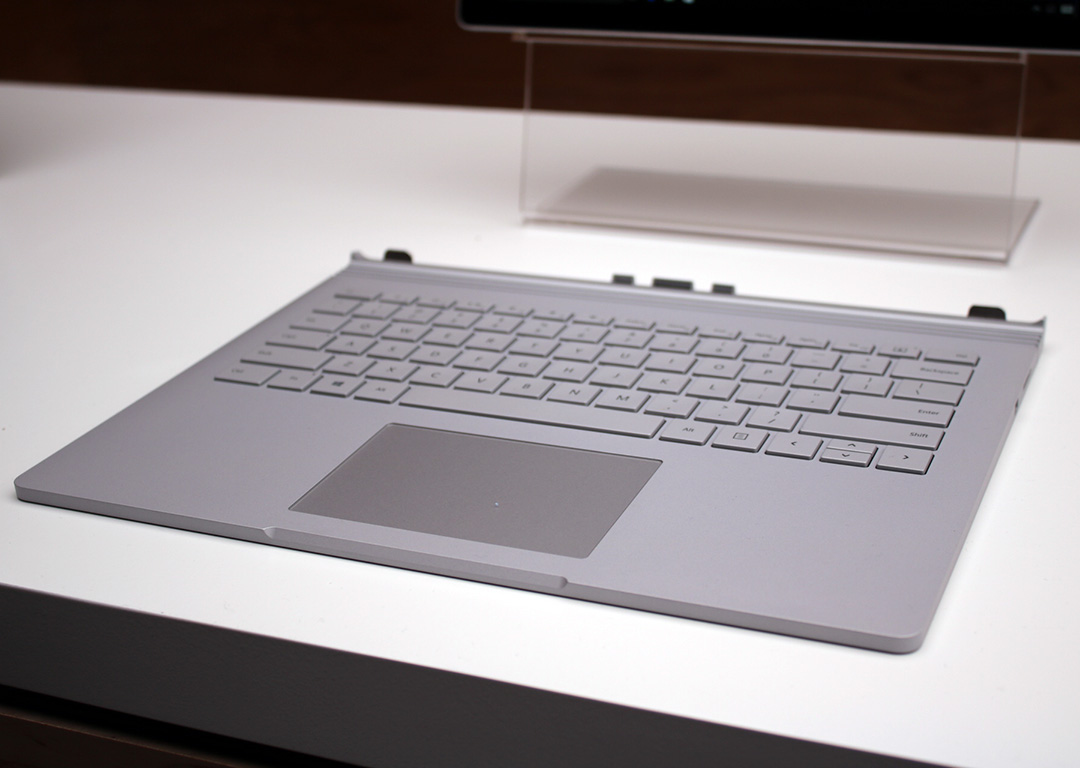 The hinge also allows the Surface Book’s keyboard to be detached entirely (something Panos made amusing fanfare over during the laptop’s initial reveal), turning the Surface Book into a significantly more stable version of Microsoft’s standard Surface Pro or Surface devices. For me, this means that I’m actually comfortable using a Surface device on my lap, something I do quite frequently with my laptop while commuting to work and traveling. The biggest takeaway from Surface Book’s hinge is the fact that its design is both sturdy and structurally sound, while still providing the flexibility Microsoft’s latest flexible laptop/tablet hybrid requires.

Surface Book’s refined keyboard is also impressive. It isn’t a tablet cover style input device like Microsoft’s Type Cover (which is admittedly vastly improved with the Surface Pro 4); Microsoft’s offshoot Surface device features a full-fledged keyboard that is satisfying to type on and functional, giving Apple a run for the top spot in ease of use as well as key travel (the Surface Book reportedly only features 1.6mm key travel). 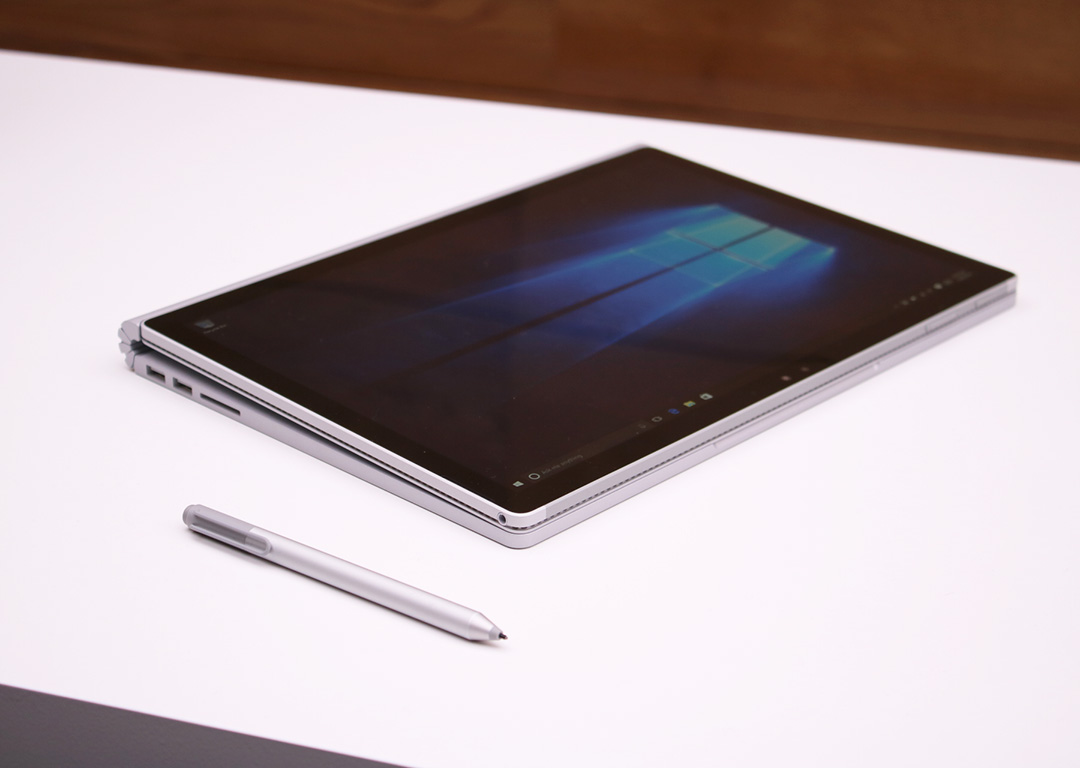 Delving into the technical specifications, Microsoft’s Surface Book sports a 13.5-inch 3000 x 2000 pixel resolution display at 267ppi (six million pixels in total), and while I only spent a brief period of time with the laptop, its screen looks vivid and is exactly what most people would expect from a high-end laptop, rivaling the quality of Apple’s Retina displays.

The Surface Book also takes advantage of Intel’s latest generation of processors, features Nvidia GeForce graphics capabilities (which is reportedly located in the laptop’s keyboard), all in a device that weighs 3.3lbs (or 1.6lbs when the keyboard is detached). During a brief demo, a Microsoft representative showed off how Windows 10, with the help of specialized software, instantly knows when the Surface Book’s graphics card has been unplugged and disengaged, a must for a laptop like the Surface Book to be practical. 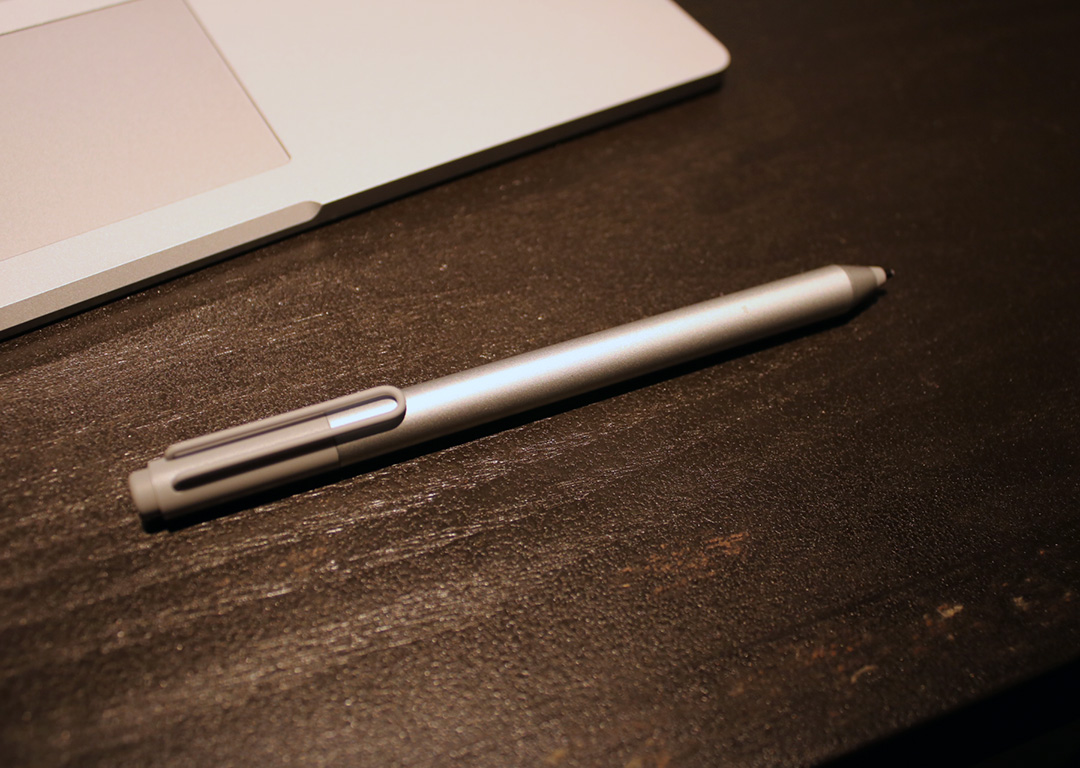 The one major drawback I noticed during my short hands-on session with the Surface Book (besides its hefty price tag, which we’ll get to later) is that the button used to detach the laptop’s keyboard (located behind the backspace key) felt a little sticky. Also, the screen didn’t separate easily from the keyboard, requiring a small amount of wiggling to pop out. Whether the magnets that attach the keyboard to the display were too strong, or the locking mechanism was faulty, is unclear.

However, it’s important to point out that during a subsequent demo, this issue seemed to be gone, so the problem could be related to the Surface Book demonstration device being a pre-production unit. 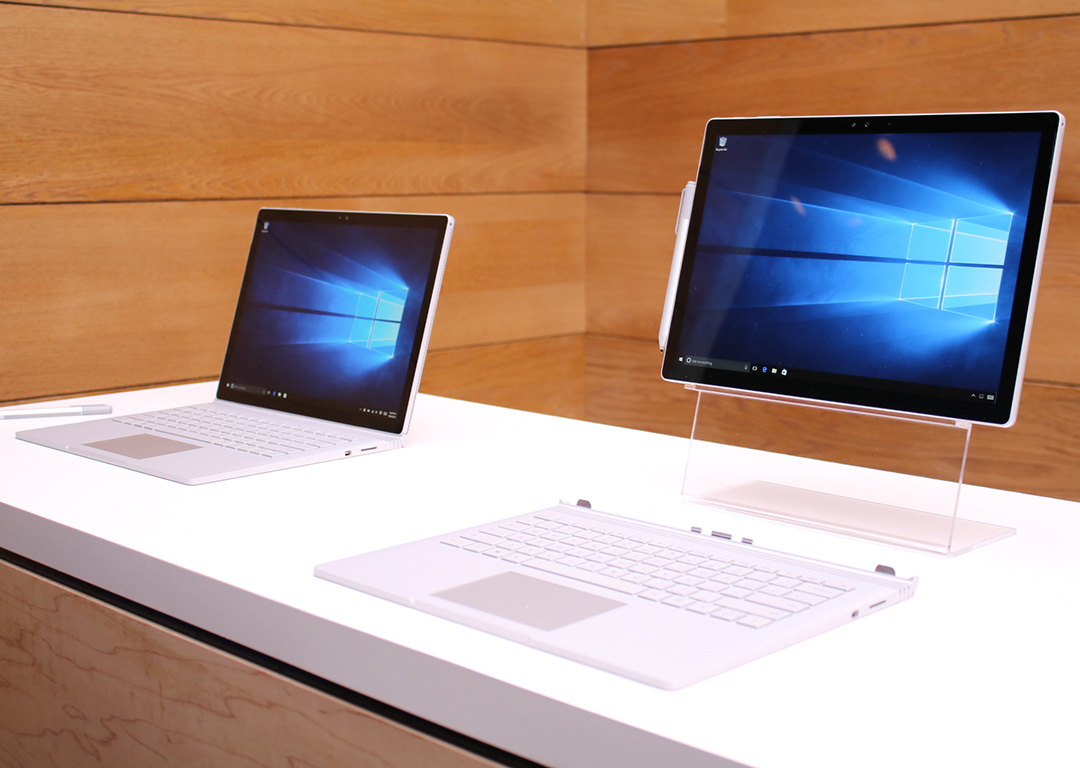 So while Microsoft’s Surface Book seems initially impressive, its hefty price tag could be a significant drawback for most consumers.