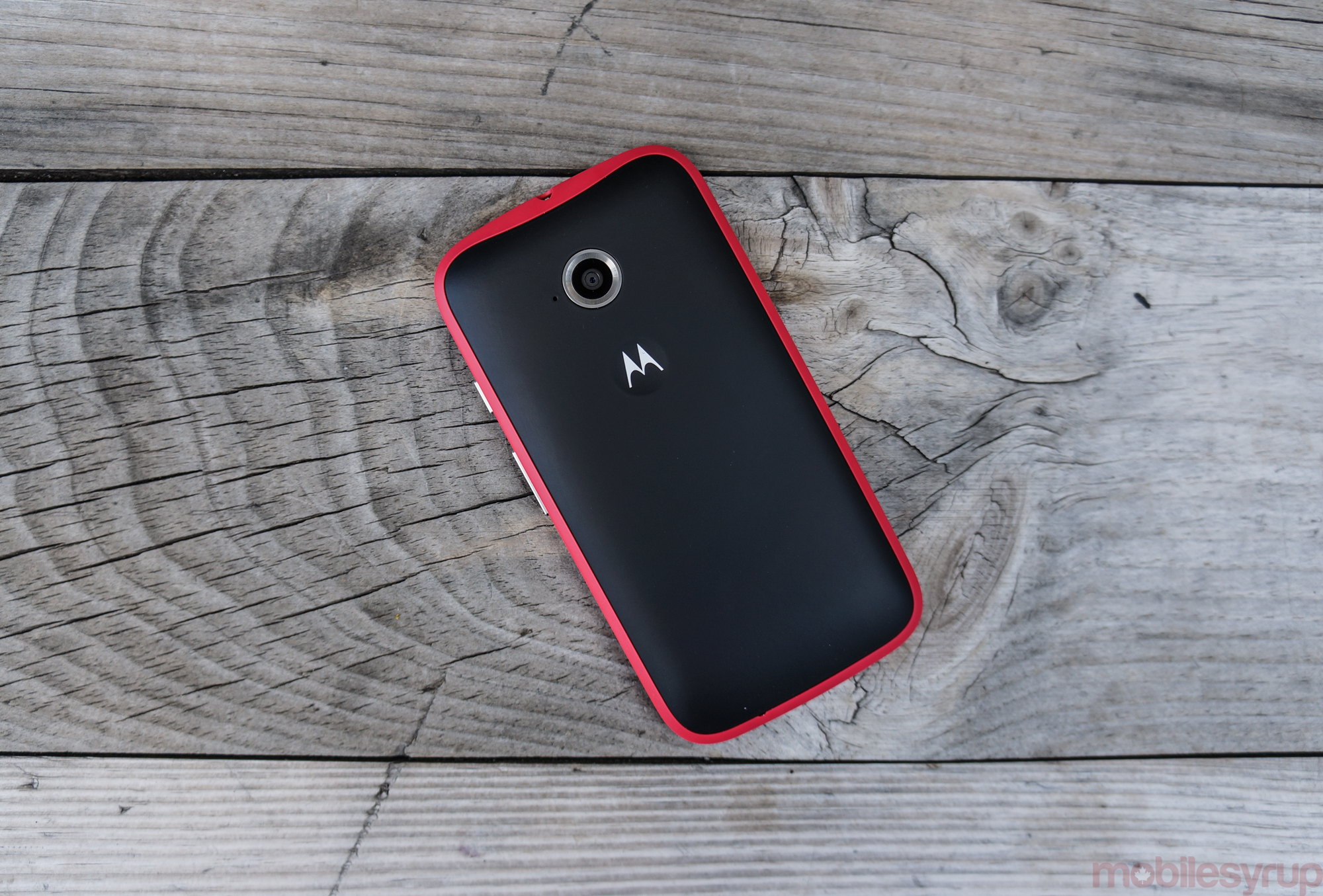 The new Motorola disagrees. After being subsumed and subsequently spat out by Google, it has retained a worldwide strategy of undermining the notion of hierarchy, embracing commoditization in a way that works for its brand.

The second-generation Moto E is but its latest example, and while there are others, this is the best one yet. At $150 CAD, the new Moto E supports LTE, an increasingly essential ingredient for commercial success, but unlike many entry-level smartphones, it doesn’t differentiate in a single, monotonous way. It establishes a base for what an inexpensive smartphone should look and feel like, and it does it in a way that doesn’t disenfranchise its higher-margin products. 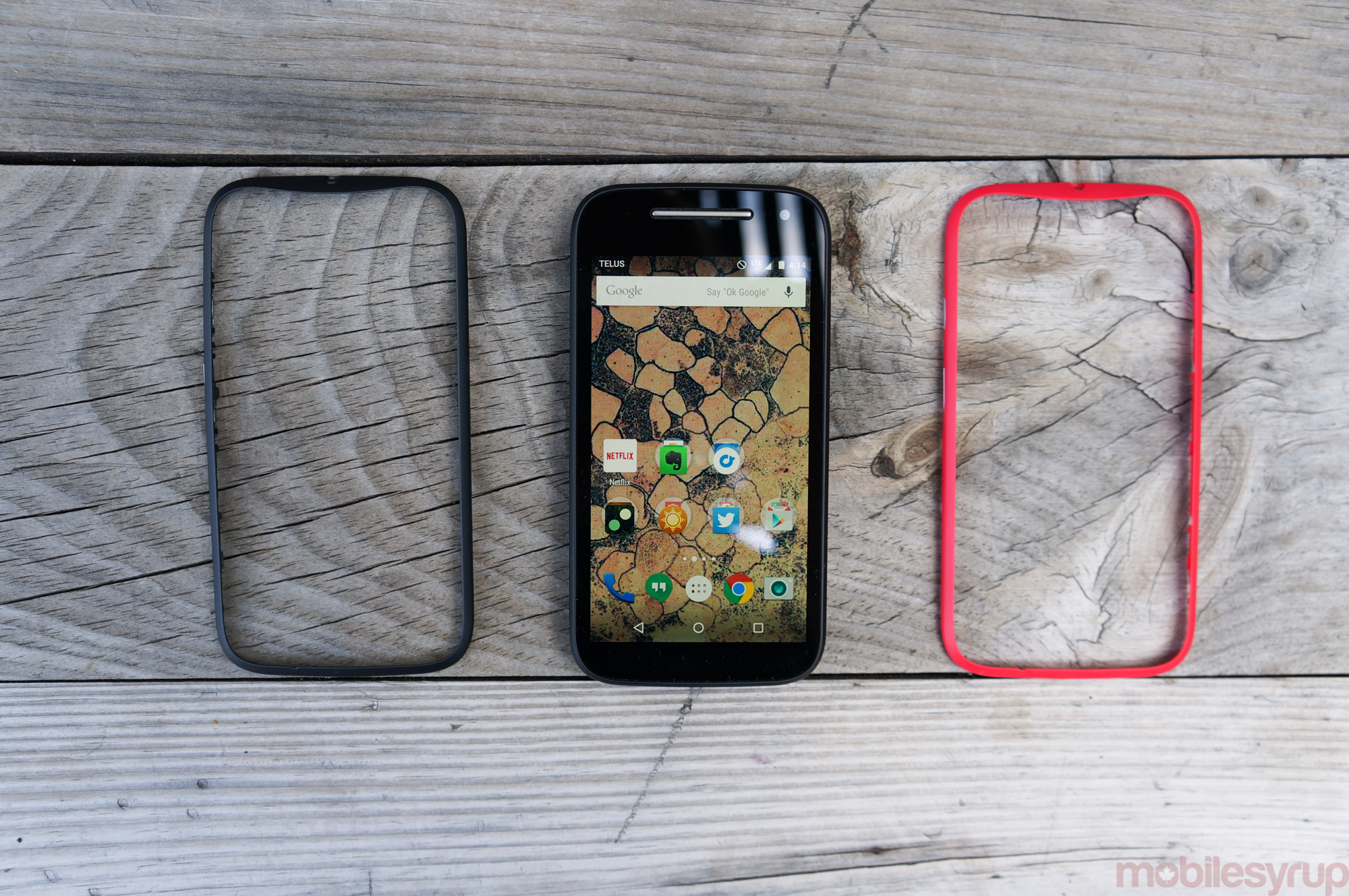 Think about the type of customer Motorola is going after with the Moto E. It’s not a long-time smartphone user, and certainly not someone accustomed to buying a high-cost device on contract. It’s that person coming over from a feature phone, or a customer unable to abide the high cost of a contract.

These people deserve a good smartphone experience, too, but often have less stringent needs than a typical long-time user. The Moto E hits all of these marks.

First, the screen is far better than any $150 device has traditionally offered. Motorola realized that it can get more from a higher-quality, lower-density panel than by stuffing pixels into a problem. It also gets these parts, which are in less demand, much cheaper. The 960×540 pixel panel was ubiquitous in 2011-2012, but has since been surpassed, even in the mid-range, by 720p HD. At 4.5-inches, though, few are going to strain their eyes too much to distinguish the flaws, and if they do, there aren’t that many to see. 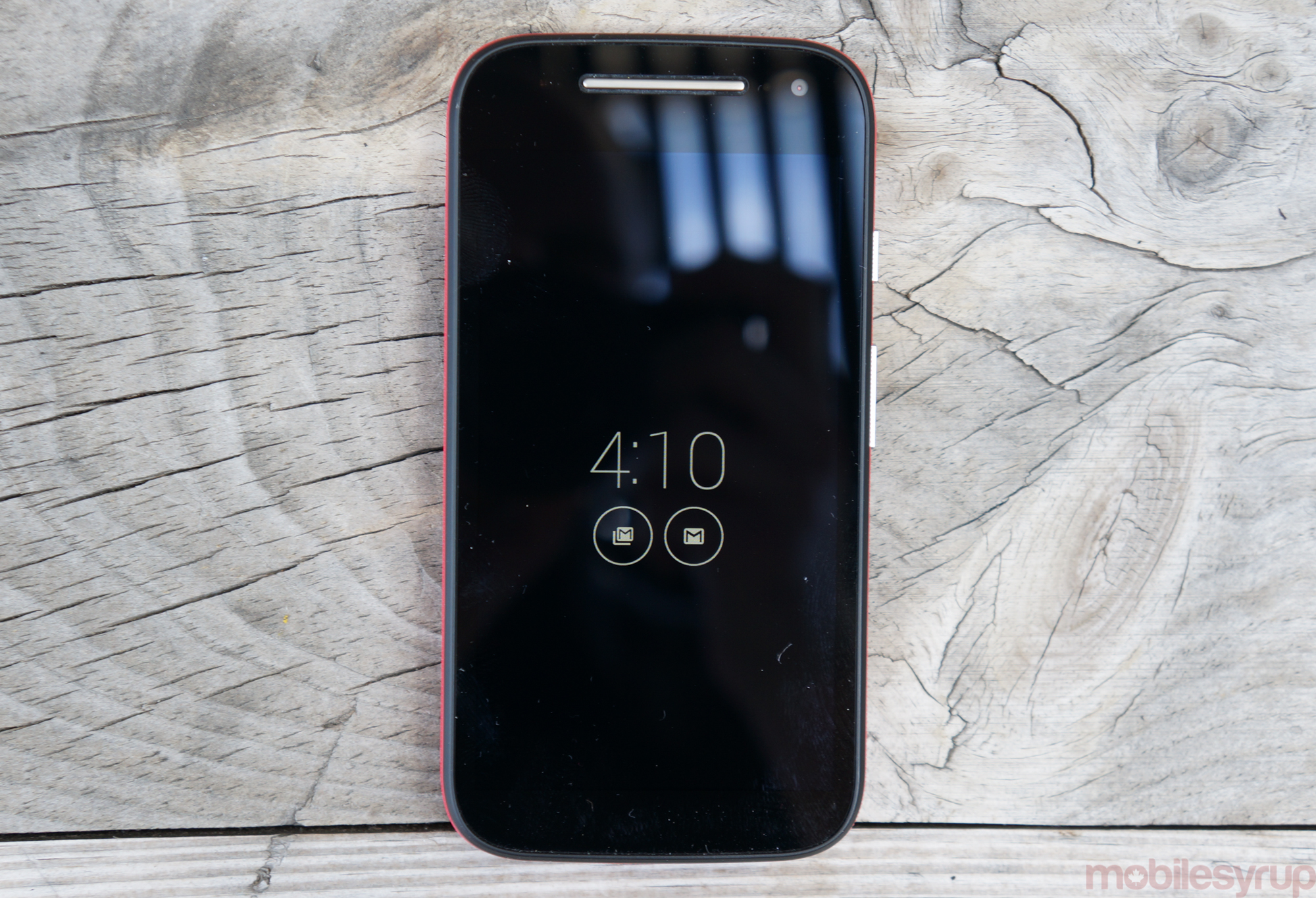 Motorola has given this new Moto E a feature called Moto Display, something that was previously limited to the more-expensive Moto X. When a notification comes in, the screen will periodically pulse with the time and up to three notifications, which can be tapped to preview, or slid on to activate. The system works well, though it competes for attention with Android 5.0 Lollipop’s native lockscreen notification centre. Either or both can be turned off, though; that’s the beauty of this phone, it’s about as customizable as any more-expensive Android device.

Motorola also benefited from having a high-quality, low-cost 64-bit part in the Snapdragon 410. It runs four Cortex-A53 cores at 1.2Ghz each, and, combined with the relatively robust Adreno 306 graphics chip, can manage just about anything Android can throw at it. Truthfully, other than the occasional stutter, I was able to use Android as I normally would on any phone three to four times the cost. 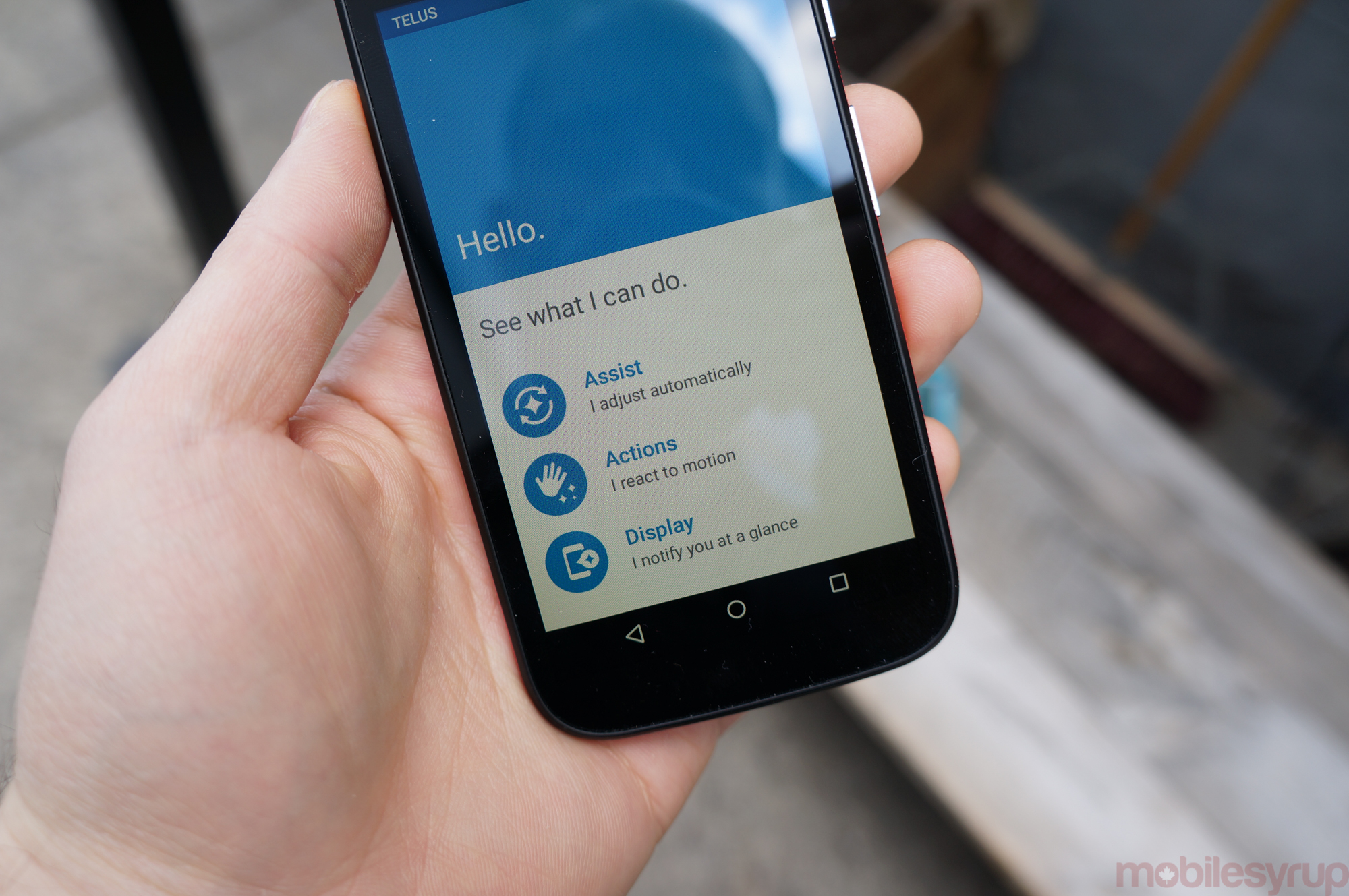 The reason for this is Motorola’s hands-off approach to Android. Other than Moto Display, and its accompanying Moto Action and Moto Assist, little is changed from the Android 5.0 experience one would find on a Nexus device. Moto Action is the umbrella term for a single command, the ability to twist one’s wrist twice to quickly open the camera. Another holdover from the Moto X, it works consistently well, and from practically any app. Moto Assist is uncomplicated, but effective: it silences the phone while sleeping or during scheduled meetings. These are the small but valuable additions to Android I appreciate.

As I said, I used the Moto E like I would any other phone, and most of the time the 1GB of RAM and 8GB of internal storage didn’t get in my way. And, for the occasional photo, neither did the 5MP camera. These are compromises one accepts for a phone at this price. As we’ll see in the next section, some are easier to stomach than others. 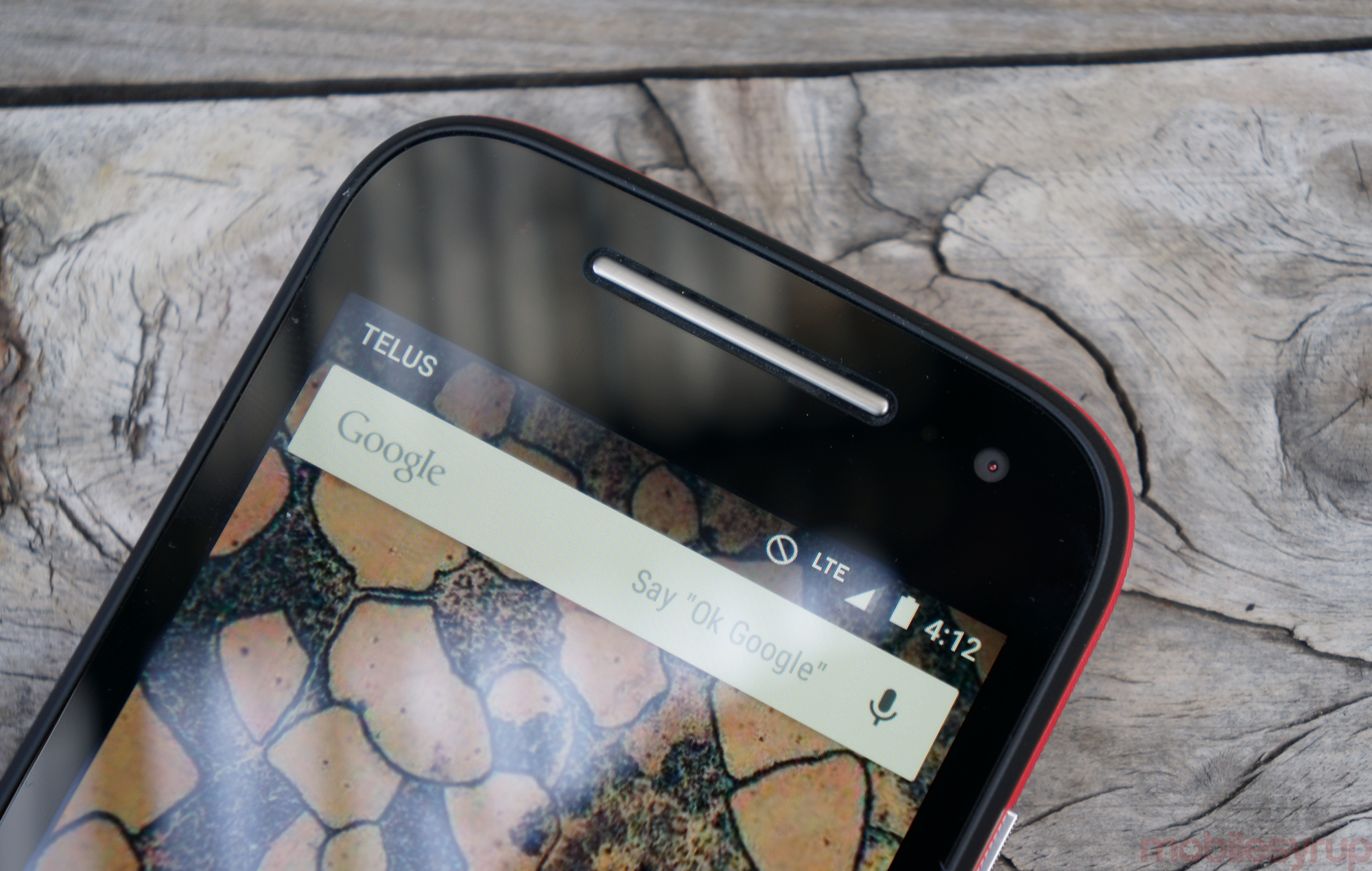 The real showpiece here is the addition of LTE connectivity. Most Canadian-sold devices require LTE because it is more efficient for the carrier, and easier to market to the consumer. Contrary to popular belief, LTE is actually a more efficient standard today than 3G, and is less onerous on the battery, another area of strength for this Moto E. I used the device heavily for more than a day and a half before it conked out and needed to be charged. 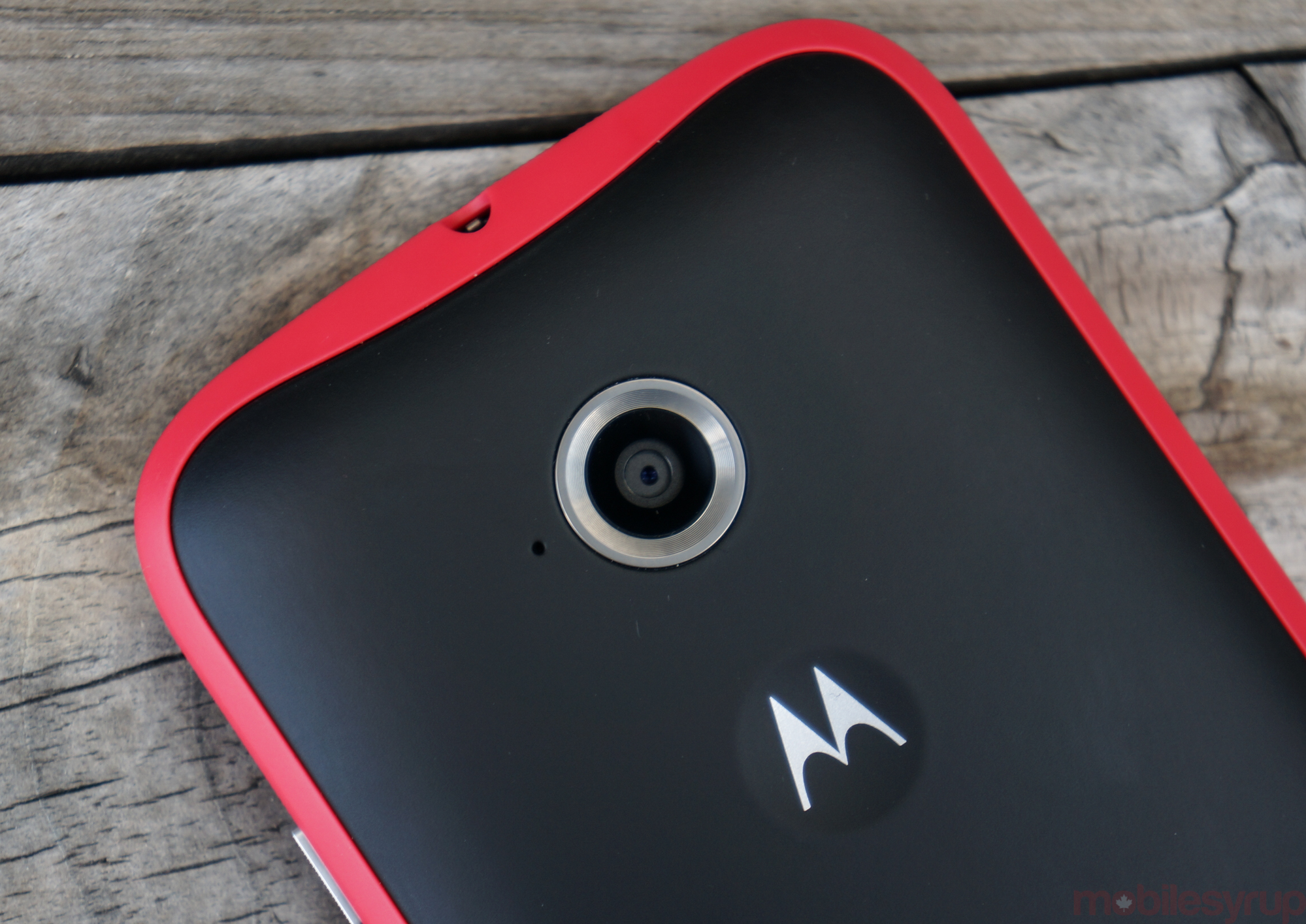 Motorola made some major improvements over the previous generation, especially in the realm of performance, but the biggest criticisms against that device are still valid here.

Storage limitations necessitate the purchase of a microSD card, adding to the cost of the phone and forcing customers to manually move data to external storage to save space. And while 8GB of storage is advertised out of the box, only 5GB is available to the user, and just over 2GB is set aside for apps. That won’t be a problem for most people, but it will limit the number of larger games that can be installed at one time. 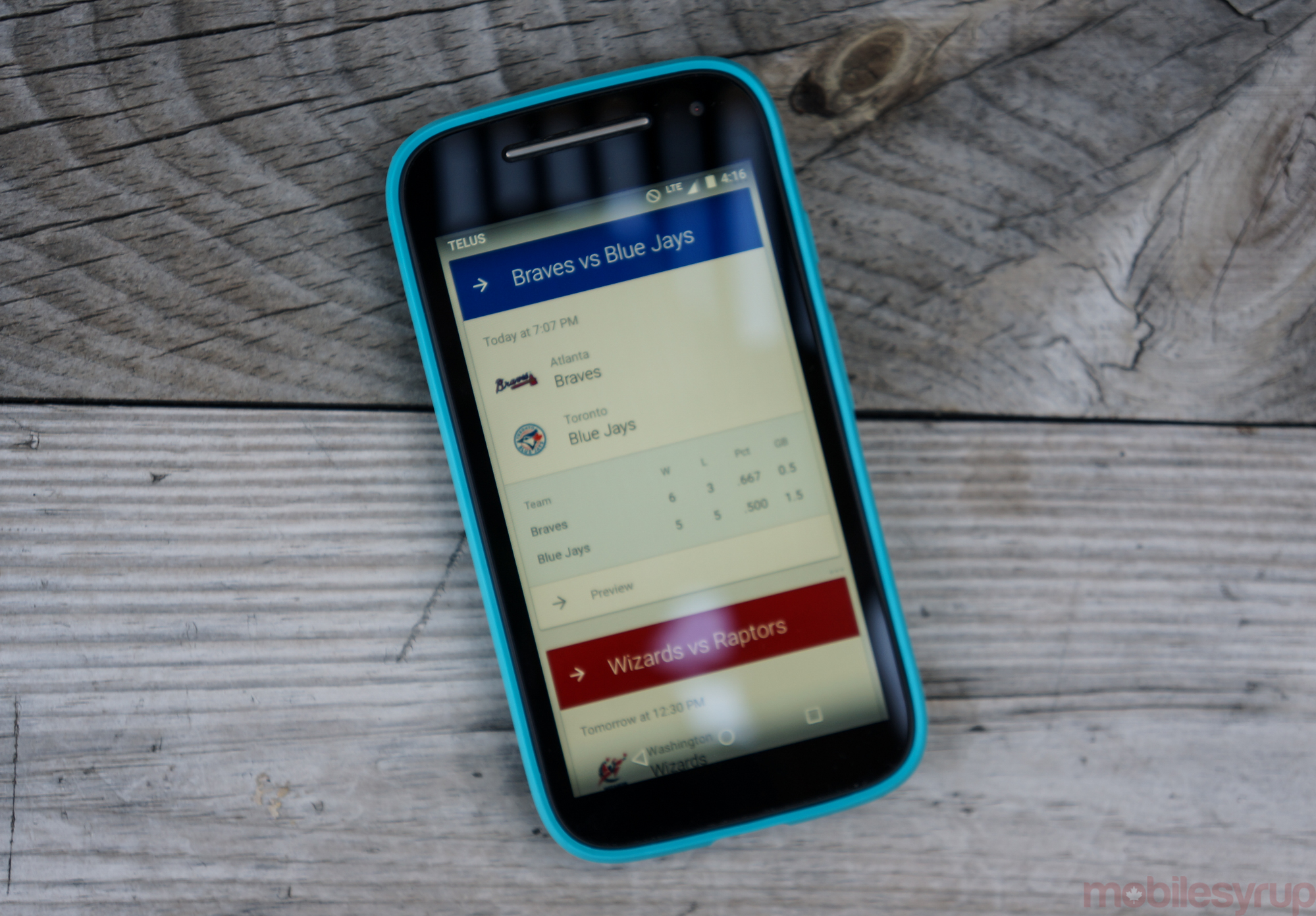 The presence of only 1GB RAM will certainly pose a problem long-term for the device as it continues to be upgraded. Android 5.0 handles a gigabyte of memory quite well, but we’ve seen other devices, like the HTC One Mini, unable to handle many tasks at once, and while the Moto E certainly does a better job, thanks to improvements in Lollipop overall, it still feels sluggish after a few hours of use, when background tasks are being juggled and processes killed. Like a PC, Android handles low RAM counts well enough, but benefits greatly from even 500MB more.

Finally, the Moto E’s camera is decidedly mediocre. It’s a lot better than I expected it to be, though, given the pedigree. Well-lit shows resolve a sufficient amount of detail from the 5MP rear sensor, and the f/2.275 lens is sharp enough to tackle most exposures. Outdoor shots turned out well as a result, with excellent colour balance and surprisingly good dynamic range. Obviously, spatial resolution is limited, so don’t expect to blow up these photos for picture frames, but most of the photos I took were more than good enough to share online.

As expected, camera performance takes a dive in low light, and the lack of a flash makes it difficult to compensate in any way. Obviously, one expects compromises on a $150 camera, but these are more than understandable. 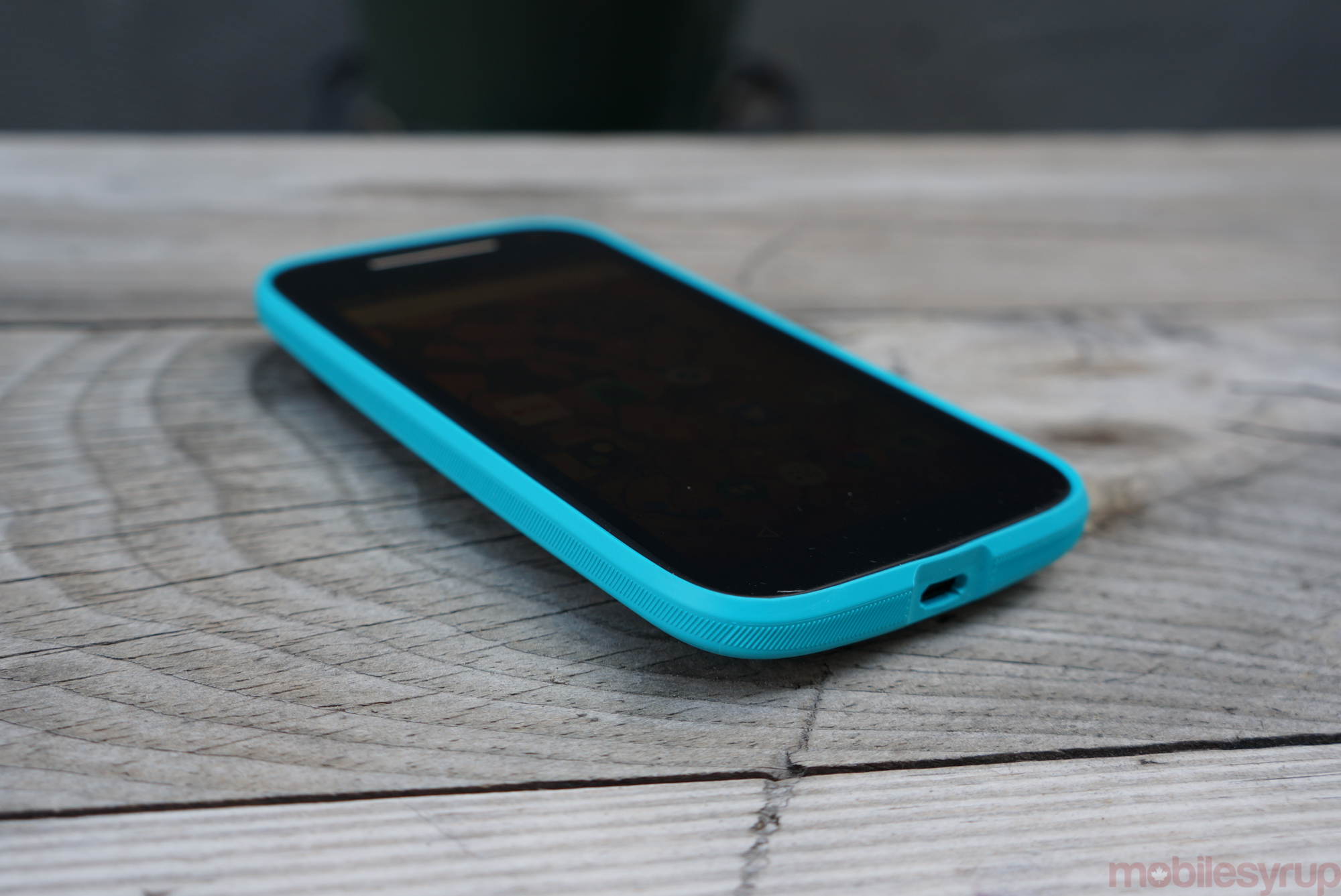 The Moto E’s negatives are few, and don’t undermine the truly superlative nature of this product. As a first smartphone, it is a great choice, but its price affords it the versatility of being used in a number of different configurations. Because it can be so easily purchased outright, many carriers will offer discounted plans with the phone, and it takes to prepaid service quite well.

And because there are a number of accessory choices with the device, from cases to coloured bumpers, the Moto E can fit its owners’ styles without incurring too high a cost.

The Moto E LTE is available from Koodo, Telus and Videotron. 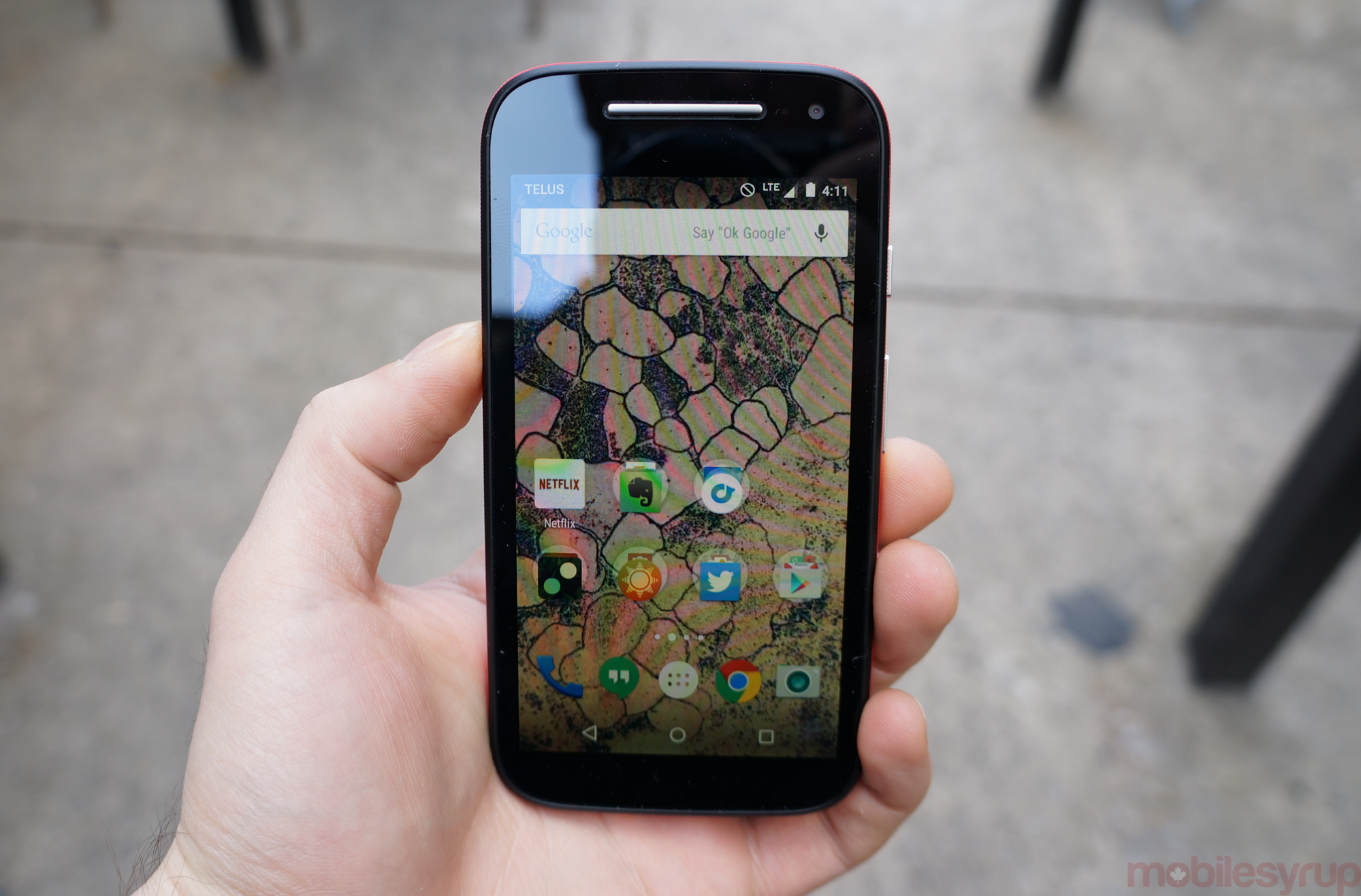