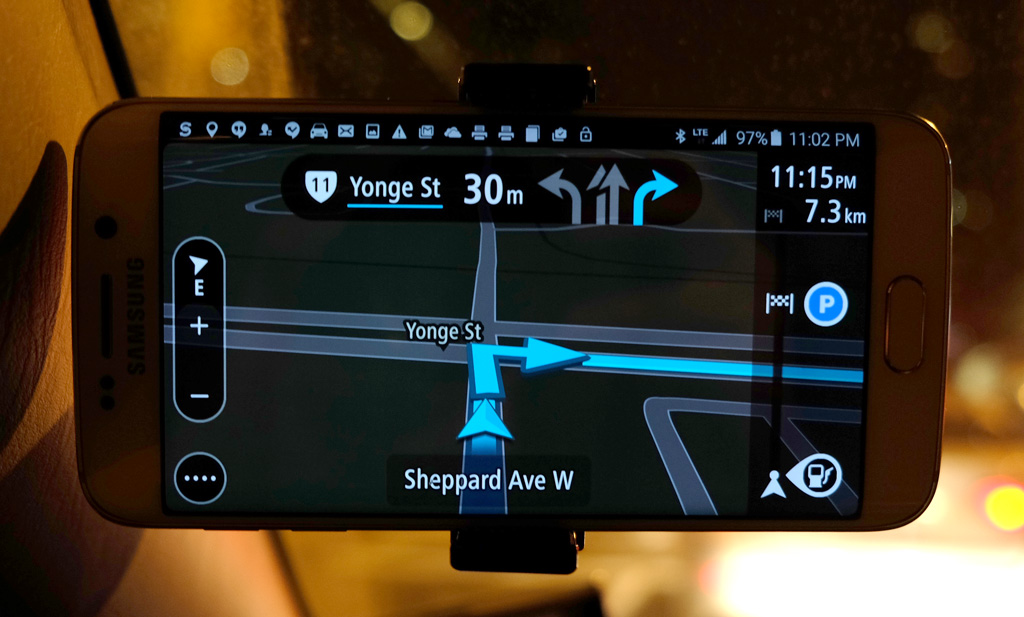 Portable GPS units hit the market with a bang, only to have been subverted by the versatility of smartphones in less than a decade. TomTom has ridden this wave somewhat cautiously, committing itself to iOS with its own app and providing data to Apple Maps, leaving Android to fester in mediocrity.

The new TomTom GO Mobile app is a rebrand for Android, and done in a way that is easy for both loyalists and newcomers. To entice drivers to give it a try on the road, its premium features are free to use for up to 75km of driving per month. This includes live traffic data, but if you want to go further, you’ll need to subscribe at $22.99 CAD for one year or $51.99 for three years. Otherwise, there is no difference in performance.

For those who already purchased TomTom’s previous Android app, an upgrade to a three-year GO Mobile subscription is only $0.99, which should remove some of the pain.

If you own or have used one of TomTom’s GO navigation units in the last year or two, you will recognize the interface straight away. To add familiarity and, it would appear, streamline and harmonize the maps and features across the board, the company chose to keep it as authentic as possible. Having tested a few GO units myself in the past, I noticed it quickly.

Indeed, this is a good thing for experienced and first-time users alike. TomTom has typically done well with designing user-friendly software, and GO Mobile is probably the best example to date.

Unlike Google’s mapping solution, whole maps can be downloaded for offline use, and you get a choice as to what combination you want. You can opt for only Canada and Alaska, Canada and the U.S., only the U.S., or the entirety of Canada, the U.S. and Mexico. Note that the size of some of these downloads are huge; Canada and U.S. together comes to 5.2GB — a crippling footprint on devices that don’t have expandable memory. The Canada and Alaska map is a more manageable 846MB, and what I mostly used for the purpose of this review.

The initial map menu may give the wrong impression that North America is the only region supported. Within the settings, there are downloadable maps for different parts of Europe, Africa, Australia, New Zealand and Southeast Asia. In all, there are 111 countries covered. And crucially, there are seven dedicated maps covering different regions of the U.S., so you can pick and choose based on whatever road trip you’re going on and take up less of your phone’s precious storage. 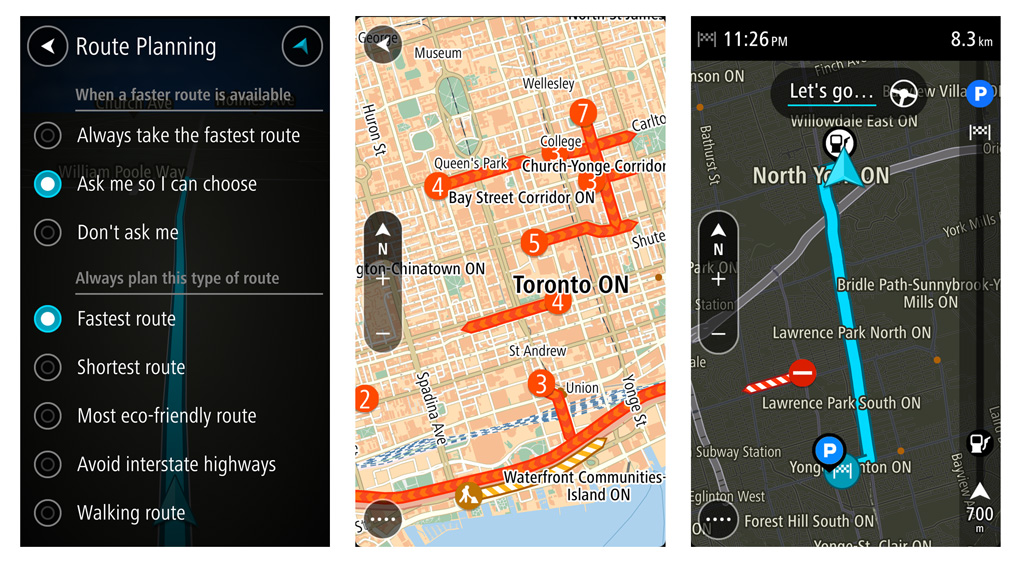 The cornerstones of GO Mobile, beyond actual navigation, are live traffic and safety camera locations and warnings. Both are always available in real-time, and they populate onscreen when you have a data connection. Points of interest (POIs) are also there, with parking and gas stations laid out on the map when you need them.

Interestingly, phone contacts can also be marked on the map, so if you have a significant other, friend or relative who lives across town, you can always navigate over using the app’s routing ability. Routes that you drive on often can be added to My Routes, whereas recent ones and those of contacts and marked locations are under My Places.

Routes can be customized to avoid highways, unpaved roads, tolls and carpool lanes, as well as choosing the fastest, shortest or most eco-friendly route. By default, the app will ask if you want to switch to a faster one once it becomes available, but you can change that to do so automatically or not ask you at all. 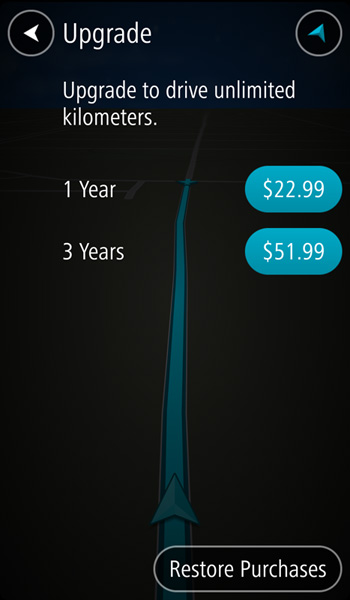 The maps themselves are superb, and the way contextual information is presented is well thought out. From the start, red lines illustrate where traffic is slowest. Nearby red-light cameras or speed trap icons pop up, along with other POIs. GO Mobile is designed to provide routes based on whatever criteria you’ve chosen, and any route it presents is supposed to steer clear of traffic jams. Except the tighter the parameters, the looser the interpretation.

For example, if I chose to avoid highways, yet still wanted the fastest route during rush hour, the app didn’t always direct me away from main streets to make use of side roads that could get me there faster. Moreover, routing and contextual information is based on a data connection, so if you hit a dead spot or there is some issue with connectivity, it can throw the map off until it reorients and catches up to where you are. Portable GPS units generally don’t have this issue unless line-of-sight is broken.

Still, it’s easy to overlook some of the shortcomings when the map is reliable. It does select good routes, zooms in on turns, junctions and ramps, and gives ample audible warning on where to go. Of course, the 75km monthly limit whittled down as I went along when testing it without a subscription — a constant reminder that the freemium tier is not enough to rely on for daily commuting.

I would also recommend only using GO Mobile with a constant power source, because the app is a serious battery drainer. On a fairly short 15km commute with moderate traffic, I lost over 30% from a Samsung Galaxy S6. The phone also got uncomfortably hot in the process. I inquired with a TomTom rep about this, and he suggested using a 2.0 Amp charger when driving with the app. I couldn’t agree more.

Being a freemium app, GO Mobile is every bit about trying to woo Android drivers. The 75km limit may be just enough for those who need it in a crunch, but there are free alternatives that take up less storage space and can work just as well without the range anxiety. Clearly, this is an attempt to compete with them and appeal to users who want that kind of experience. An iOS version is reportedly in the works, too, though TomTom wouldn’t confirm a timeframe for launch.

The pricing model will be interesting to watch, since the cost of a three-year subscription almost equals that of full ownership with the previous TomTom app for Android. The map and interface here is a notable upgrade in the ways that matter, so it comes down to how much value you derive by simply trying it out.