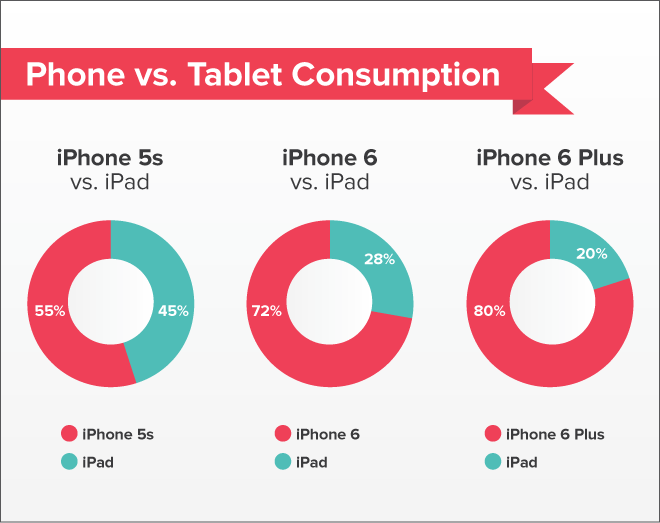 The iPhone 6 and iPhone 6 Plus are Apple’s biggest phones to date, and the latter, with its 5.5-inch 1080p display, is firmly in phablet territory. So what does that mean for the iPad? At 7.9 inches, the iPad mini used to fill the gap between smartphone and laptop exceptionally well. Will iPad usage suffer now that people have a bigger display on them at all times? According to Pocket, yes.

Pocket, formerly known as Read It Later, allows you to save articles from the web to read at another time on iOS, Android, Windows Phone, BlackBerry, Mac, Windows, or a browser. Because of the function it performs, Pocket has a lot of data on the devices people are using when they click on links and open articles. According to a blog post published today, the release of the iPhone 6 and iPhone 6 Plus has impacted iPad usage among Pocket users.

Pocket looks at its data from before the 2014 iPhones were launched. Specifically, at data from users who owned both an iPhone 5 or 5S as well as an iPad.

These are people who had the choice of viewing their content on either screen, not just users limited to one device or the other. So Pocket found that these people consumed 45% of their content on the iPad while the 55% of their content was consumed on their iPhone. Pretty even, which is somewhat surprising, especially when you consider we always have our phones with us while our tablets move around a little less.

When you look at the post iPhone 6/6 Plus data, the story is very different. Of the users that own both the iPhone 6 (which is still only 4.7-inches) and the iPad, 72% of content is viewed on the iPhone 6. When you step up to the iPhone 6 Plus, that number jumps to 80%.

Funnily enough, these numbers match up exactly with Android users’ viewing habits. The Android ecosystem got its first real phablet years ago, and Pocket says 80% of content is viewed on Android phones, versus 20% on tablets.

Pocket’s data underlines an issue experts have been talking about more and more over the last couple of years. When manufacturers produce larger smartphones alongside small tablets, they run the risk of cannibalizing their own products, especially as tablet growth slows. We said before that the death of the Android tablet hasn’t been exaggerated, but did Apple just kill the iPad with the iPhone 6 and 6 Plus?