OnePlus is trying to revolutionize the Android smartphone and it’s trying to make as big a splash as possible while doing it. However, its latest endeavour definitely didn’t generate the type of publicity a relatively new company wants.

This morning, OnePlus launched a contest directed at female members of its forum. Specifically, the company wanted its ‘beautiful female fans’ to post photos of themselves holding a sign bearing the OnePlus logo. The deal was that fifty of the women posting pictures would get an invite and a t-shirt. The ‘best’ entry overall would get a phone. A further 100 entries (selected at random) would gets invites to buy the phone.

Unfortunately, it wasn’t as noble a cause as highlighting the small number of women in the OnePlus community. Or at least it didn’t come across that way for a lot of people. The way the contest was being run suggested that this wasn’t about empowering the female members of the OnePlus forums but about giving the men something nice to look at. And maybe getting some nice pictures for OnePlus to use down the line for marketing purposes (the terms and conditions dictated that the company had the right to use your image royalty-free worldwide thanks to a perpetual, irrevocable license you grant the company by posting the photos).

The first problem is that by calling the female members ‘beautiful’, OnePlus implied that this contest was about looks. Perhaps they meant beautiful through and through, though! Okay, let’s give them the benefit of the doubt. But that brings us handily to the second problem with this contest, which was that the winners were to be determined not by OnePlus moderators or a random selection process but by forum members who would vote on their favourite image (or girl). There’s also the casual reminder for entrants to keep their clothes on, because that’s really hard for us ladies to do when we’re faced with a contest that involves posting pictures of ourselves for public consideration in exchange for a free t-shirt. 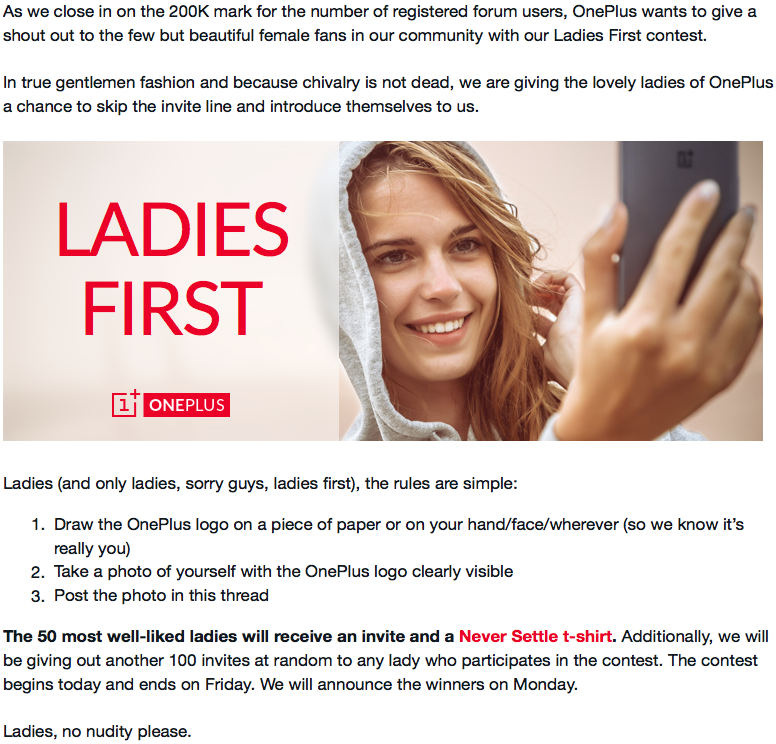 The comments on the post included many remarks from gleeful members expressing excitement and joy over the fact that such a contest was being run and a healthy number of women posting pictures in the hope that they would win an invite. However, plenty of users (male and female alike) found the contest sexist, insulting or just plain unfair and made their feelings known, too. Understandable, considering a lot of people have been waiting for an invite for ages and might not want (or be eligible) to compete in this type of contest. One female user even went as far as to post a photo of herself with a sign that reads, “This contest is sexist and insulting. (Way to inflict self-esteem issues, we don’t have enough of that in our society.)” More still complained that negative comments were being removed (OnePlus said later in the morning it cleaned the thread of ‘off topic’ posts and flamewars), which means we didn’t even see all of the negative commentary this contest is generated.

It seems the final straw was word from OnePlus partner Cyanogen Inc. The company partnered with OnePlus back in January to put Cyanogen Mod on the company’s flagship phone. This afternoon, Cyanogen Inc tweeted:

“We value all of our users and do not support any contest that objectifies people.”

We reached out to OnePlus to ask if it would be pulling the contest, especially in light of Cyanogen Inc’s negative remarks. While we didn’t receive any immediate response, it seems the contest has indeed been pulled. Unfortunate that it appears to have taken a major partner to force OnePlus’s hand (as opposed to the countless unhappy forum members).

We could go on forever about why this contest and the way it’s worded is really terrible, but what this is really about is the need for the tech community to treat everyone as equal. Include everyone and no one will be excluded. Yes, there’s something to be said for the promotion of female participation in tech, but there are ways to do that without alienating men, dividing the community by gender, making women feel like they need to use their looks to get ahead, or perpetuating the idea that women are only in tech to provide eye candy for the lads.

Update: OnePlus has issued the following statement regarding its “Ladies First” contest:

“Women make up half the world, and we want to help them be more involved in tech. We understand that our contest was in bad taste, and have therefore pulled it. All participants will be contacted for prizes. We apologize and we will course correct for the future. At the same time, we would love to hear your feedback on how we can better get women involved in tech.”