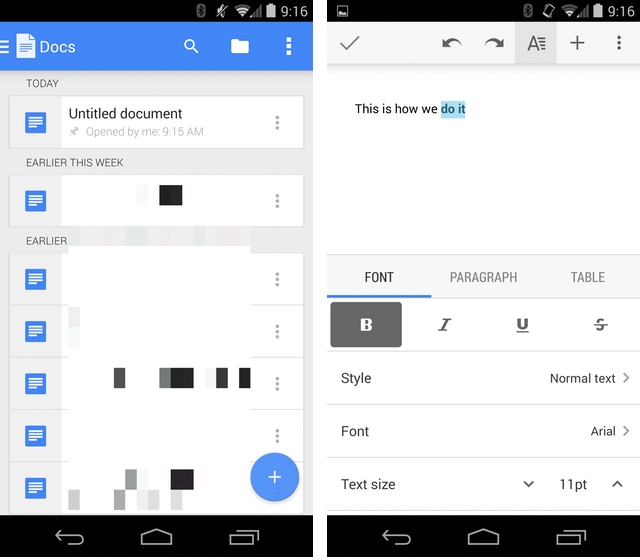 It’s only been a few days since the announcement of Android L, but Google has already dispatched the first two of what is expected to be a whirlwind of app redesigns.

With Android L, Google announced Material Design, a new design language that prioritizes movement, shadow and colour. While these updates to Docs and Sheets don’t quite recall the keynote slides, they’re a breath of fresh air, and a huge improvement, both in aesthetics and functionality, over their former selves.

During the keynote, Google announced it was shuttering Quickoffice, the Microsoft Office-licensed mobile app it purchased in 2012, in order to integrate the same functionality — Office document creation and editing — into Docs, Sheets and Slides. Quickoffice will soon be taken off the Play Store for new downloads, and will no longer be updated, but in its wake new versions of Google’s now-independent editing apps have taken its place.

Docs and Sheets now have bottom right action buttons in their respective colours, blue and green, similar to the recent overhaul to Google+. While at the time it was unclear whether this would be Google’s future direction for all of its native apps — Gmail leaks appeared to show a similar action paradigm — it appears to be all but certain now. Aside from the much-needed addition of some colour, Docs and Sheets now has a much better dictionary and word/sentence selection UI, along with a brand new editing window that works much better on smaller devices like smartphones.

The updates don’t appear to be available yet in Google Play, but Android Police has APK files for those who don’t want to wait.