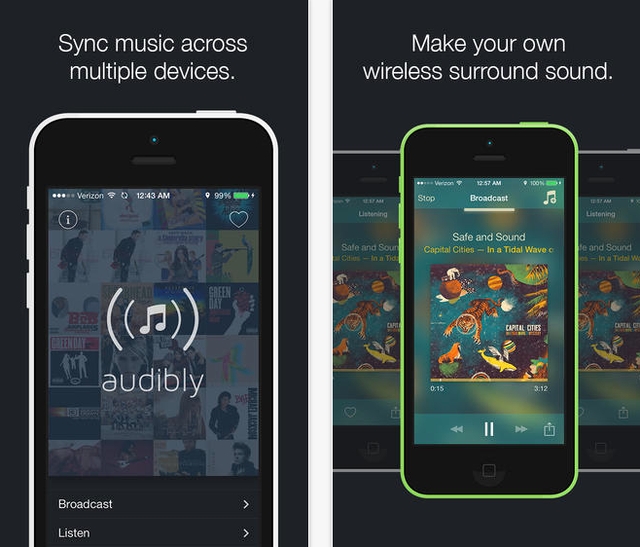 One of the more interesting developer features Apple added to iOS 7 was 3rd party access to its Multipeer Connectivity Framework, which allows devices to connect peer-to-peer via Bluetooth and Wi-Fi direct without the need for an Internet connection thanks to mesh networking technology. Of course, any new tech justifies itself through the services it enables. FireChat is one such app, which uses the framework to allow for “off the grid” private message. A new app called Audibly is now using the technology to turn multiple iOS devices into a wireless surround-sound system.

Here’s how it works: an iOS 7 device with the Audibly app installed can can select a song saved to the device and set it to stream to other devices. Those other devices, up to six in total, can send a request to stream the song, which once accepted, turns them into a synchronized wireless speaker system.

While Audibly might prove useful when hanging with friends and in dire need of loud summer jams, the story behind the app’s creation might be more compelling than the app itself. Audibly’s high school student co-founders met last year at WWDC, getting into the event via free student passes. The group came up with the idea during a session on multipeer connectivity, rolled up their shirt sleeves, and had a working prototype before the conference was over. The myriad announcements at WWDC this year calls one to consider just what new apps we might be seeing from enterprising young developers in the coming months.

Audibly is available in the App Store right now via the source link below.