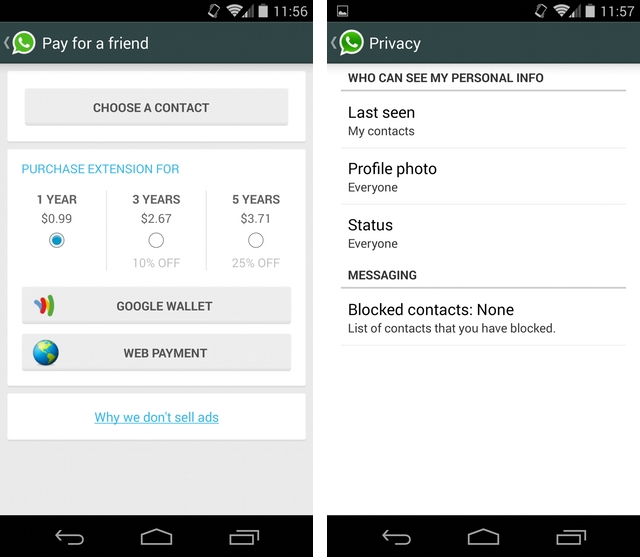 WhatsApp for Android got an update this week that allows users to pay for their friends’ subscriptions in one-, three- or five-year increments.

The feature was the biggest in a relatively busy change log, which includes the option to hide profile details, such as your avatar, status and time last online, and a new camera shortcut for faster picture sending.

The new version also adds an option to show unread messages on the home screen widget, and fixes a number of issues on Samsung and Sony devices. Version 2.11.186 also enables the Hindi language within the app on devices running Android 4.1 and above.

The “Pay for a friend” feature is interesting for a number of reasons, but mainly because it makes it easier for friends and family to convince smartphone users to join the service. Though all users get the first year for free, being able to say, “I want you to start using WhatsApp, and I just paid for three years of service for you,” makes it a bit more sticky. Multi-year subscriptions are also discounted: for example, three years costs $2.67 and five years, $3.71. The screen also reinforces the notion that WhatsApp, even though it is now owned by Facebook, will never show ads within the app.