What is WOW! Mobile? (Updated)

Over the past week or so we’ve been hearing speculation that Rogers would be coming to market with a new wireless marketing strategy.

The name was unknown and the offerings, according to our sources, state that the company will focus on the no-contract market and offer unlimited talk, text and data packages – including LTE. The device lineup will be much better than what its current low-cost Chatr brand sells with smartphones like the Moto X, Nexus 4, etc. A report today from a site dedicated to retail in Canada called ‘Retail-Insider’ has pegged this to be true and has also revealed a potential name: Wow Mobile.

According to the site, both Rogers and TELUS are backing the brand and will take on rival retailer Glentel’s WirelessWave, Tbooth, Target Mobile and other big box stores like Best Buy and Future Shop. If true, it’s interesting that Bell is not on board.

Apparently Wow Mobile expects to have over 100 Canadian retail locations by the end of 2014. These ‘Wow Mobile’ retail stores will reportedly be operated by Toronto-based Match Marketing/PopUp, the company that currently runs The Mobile Shop brand for Loblaws. We’ve reached out to Rogers and TELUS for a statement.

In addition, I couldn’t find anything on CIPO (Canadian Intellectual Property Office) about a trademark for ‘Wow Mobile,’ but WowMobile.ca domain was recently re-registered. The above logo is just a fancy design and isn’t the real ‘Wow Mobile’ branding. Again, for now this is a rumour.

Update: We’ve heard back from Rogers and they noted in an email to us that “We are always reviewing our retail distribution portfolio to ensure the best possible availability of our products and services and customer experience. We don’t have anything to further to share at this time.”

Update #2: TELUS also stated that they are ‘not able to comment on speculation.’ 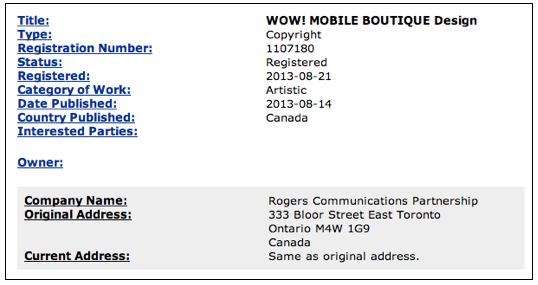