The next version of Android is called KitKat

Google unveiled today, as it always does prior to an announcement, a new statue on its lawn outside the Android headquarters. But instead of a Key Lime Pie, Google has borrowed the Kit Kat name from Nestle with the confectionary maker’s blessing.

Android head Sundar Pichai announced on Twitter just now that there have been more than one billion Android activations to date, and he “hope[s] this guy in front of the building keeps that momentum going.”

We now have over 1 Billion Android activations and hope this guy in front of the building keeps that momentum going pic.twitter.com/V0VovgmObl

The company has also launched a landing page for the new version, indicating that it will be referred to as Android 4.4, not 5.0 as previously assumed. While few details are available just yet, Google aims to “make an amazing Android experience available for everybody” with KitKat. Hopefully we don’t have to wait too long to find out what that entails. 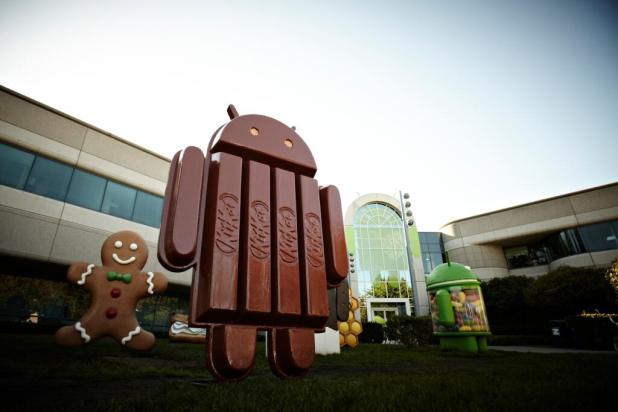 Google is also partnering with KitKat’s owner, Nestle, to offer some limited-editiion Kit Kat bars with “winning tickets” for a new Nexus 7.

KitKat has been a favorite candy on the team for some time, so for the K release, we asked if they’d be willing to lend their iconic candy bar to its name. Be on the lookout for limited edition Android KitKat bars coming soon to a candy aisle near you. For a lucky few, your KitKat bar might contain a winning ticket for a new Nexus 7 tablet or Google Play credits.

We’ve reached out to Google to see if this deal will be available in Canada, and will update this post when we find out.