“Twitter for Android Experiment” rolling out to select users 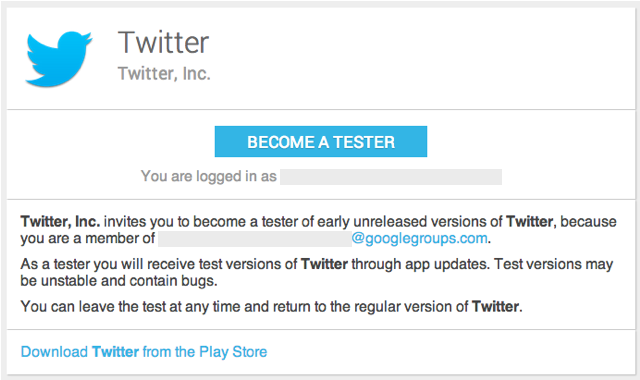 Twitter may be on the cusp of adding some new features to the official Android version of its app. Earlier today I logged into my Twitter account and was greeted with a banner that stated “Welcome to the Twitter for Android Experiment Program.” The notice informed those who opt into join the Google group of beta testers will be part of an experiment that “will help us improve Twitter for Android and make it more accessible to people around the world, across a range of Android devices.”

The ‘what to expect’ portion states that when a new build is ready to be tested Twitter will send a notification. There’s no indication of what to expect, only that they’ll “be experimenting a lot in this app as well, which means some features may never actually ship.”

So far nothing is new in this build of Twitter – hopefully that will soon change. We’ll possibly see them roll out more advertising options and TV integration.