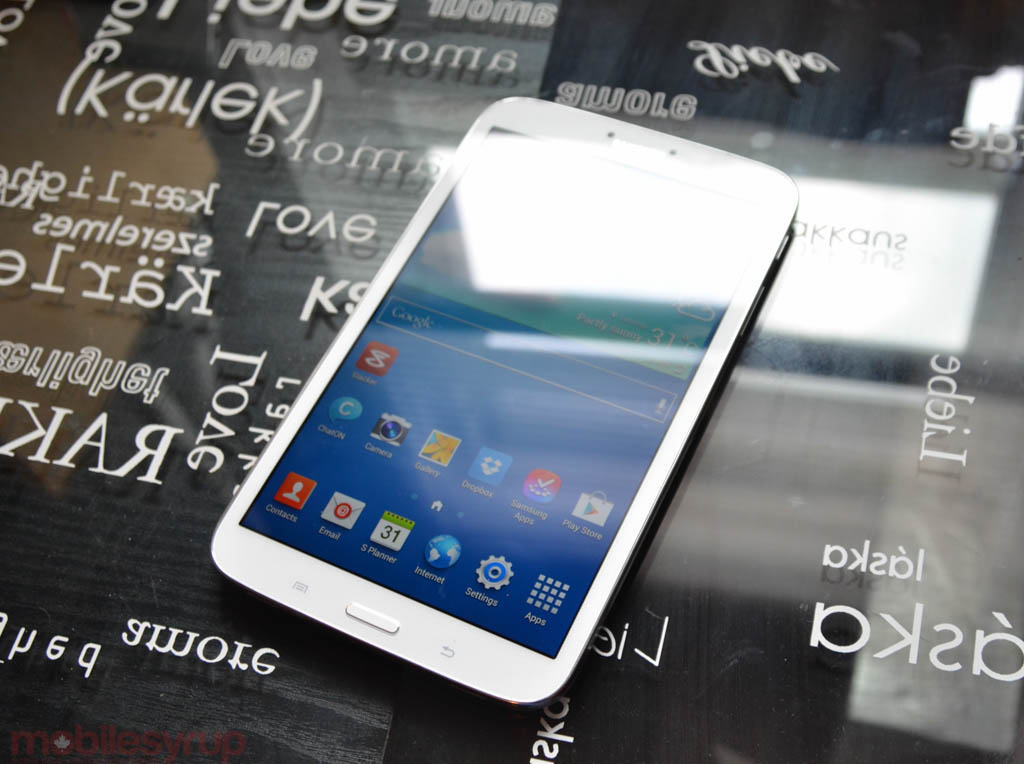 If there’s one thing to say about the Android tablet market is that, in the past year, it has dramatically improved, both in the quality of the hardware and the software that supports it.

Android as an ecosystem has grown to nearly 900 million devices, and at the recent Nexus 7 launch, Google’s Sundar Pichai claimed that one of every two tablets sold is now powered by Android. The clear winner in this market has been Samsung; like its mobile phone division, Samsung keeps churning out Android-powered tablets to suit every potential market need.

The Galaxy Note 8.0 was the company’s first venture into 8-inch tablet space, a size made increasingly relevant by Apple’s iPad mini. Slightly larger than the ubiquitous 7-inch variant but easier to hold in one hand than the often-awkward 10-inch variety, Samsung and Apple have found the tablet sweet spot. 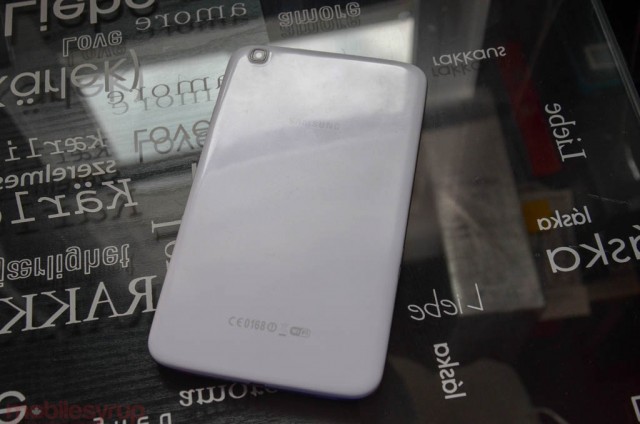 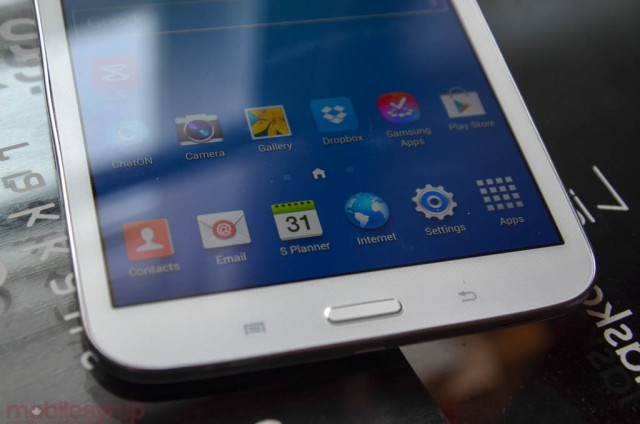 There is something to be said for Samsung’s continued use of plastics in its ever-expanding lineup, and while the Galaxy Tab 3 line improves matters somewhat over the previous versions, there is still a way to go to catch Apple and Sony.

The Tab 3 8.0 employs a similar dotted texture to that of the Galaxy S4, which performs a purely aesthetic function, but there are other similarities to Samsung’s top-brass smartphone as well. Indeed, this version above all the others resembles most the Galaxy S4, with its vertical orientation, hardware home button and thin bezels. The screen, at 189 pixels per inch, is good enough, but not what we’ve come to expect from Samsung at the high end. It compares favourably to last year’s Nexus 7, but this year’s model should have no problems wiping the floor with it in terms of clarity, viewing angles and colour reproduction.

My demo unit also had a flagging piece of plastic on the left side of the display, near the microSD port. Part of the bezel seemed to have deformed in transit, leaving a noticeable gap between the silver perimeter and glass-covered screen edge. This did nothing to impede my use of the Tab, but convinced me that Samsung needs to improve its quality control.

While the Tab 3 8.0 was far more comfortable to hold in one hand, due to its thin vertical bezel and waif-like thickness, than the larger 10.1-inch model, I found that the rear backing became, for lack of a better word, slimy, after short periods of usage.

Suffice it to say, this is one of Samsung’s most well-made tablets, and it still doesn’t come close to much of the competition. The iPad mini, with its brushed aluminum frame, is ahead by a mile, though Samsung has the edge in terms of screen resolution. 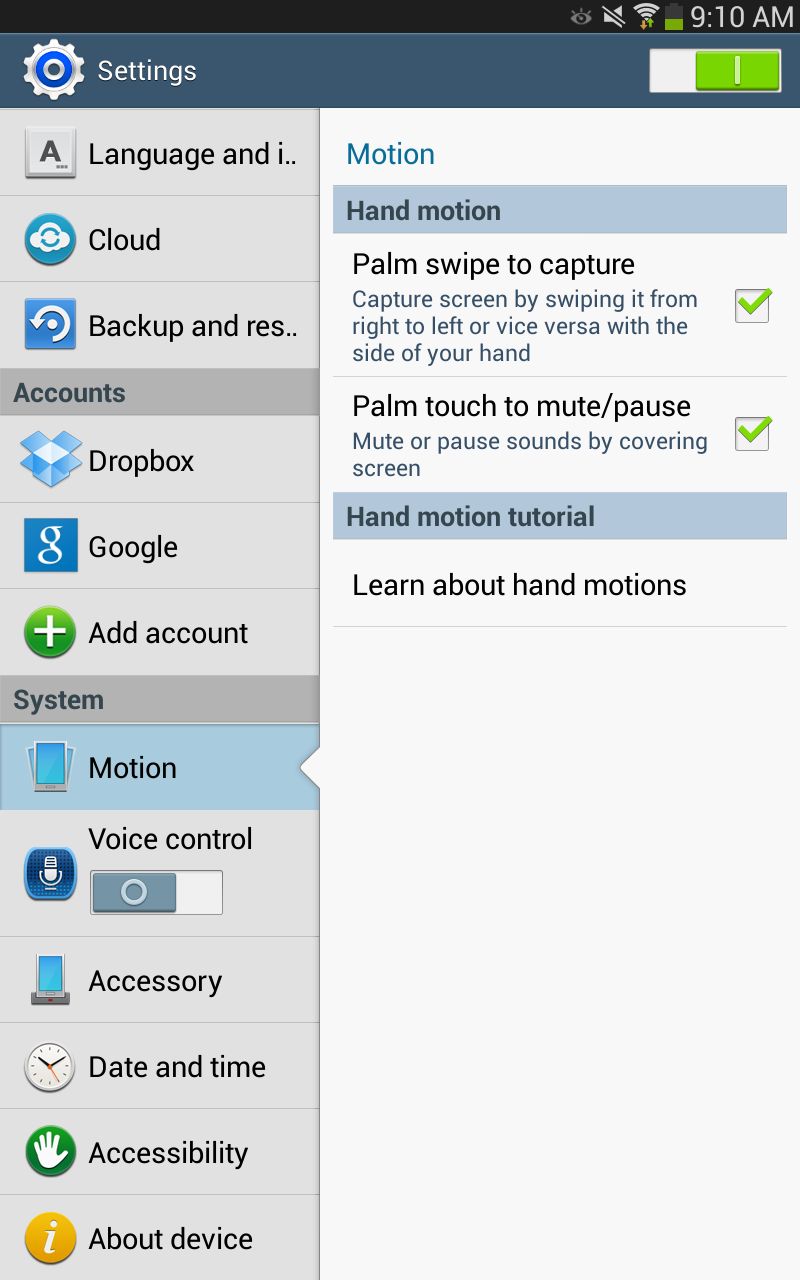 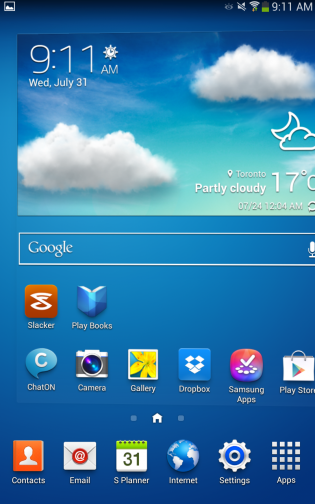 An area in which Samsung has never lacked for in Android devices is performance, and the company’s Exynos 4212 silicon does an ample job pushing a fairly lightweight and tablet-optimized version of Android 4.2.2 here.

While the software lacks many of the superfluous features of the Galaxy S4, I consider this a good thing: TouchWIZ here is lean, focusing on what users will actually use. To that end, Reading Mode automatically adjusts screen brightness and contrast, while Multi Window, which was added to the Galaxy Note last year, allows users to open and run two apps simultaneously.

Because the tablet is operated mainly in portrait mode, there is rarely a distinction between “tablet” and “phone” apps like there would be on a primarily landscape-oriented 10-inch slate. This isn’t without its drawbacks, though. The placement of the home, menu and back buttons makes it awkward to press when you do decide to use the tablet in landscape mode, and the few apps optimized for the layout appear cramped on the small screen. Apple still has the advantage here, with hundreds of thousands of tablet-optimized apps, but things are steadily improving for Samsung and its Android allies.

As with most Android 4.2-based ROMs, the Galaxy Tab 3 8.0 comes equipped with a customizable top row of quick settings, in addition to a full set of them that can be quickly activated by dragging two fingers down from the notification shade. Requisite first-party apps like Email, S Planner and Internet have been suitably optimized for the larger display, but you’re essentially playing with a taller, wider, thinner smartphone here.

To that end, I found the Tab best suited for watching short clips on YouTube, reading on the excellent Google Play Books or Magazines apps, or engaging in a few rounds of Spelltower.

I found the 5MP camera on the book to be adequate for well-lit shots, but the results lack anything resembling coherent colour saturation or dynamic range. This is a throwaway sensor that would be best left out of the product to save some money — the front-facing camera is fine, and welcome — but Samsung, like most other manufacturers, insist on including it.

As with most tablets these days, the 4450mAh battery inside the Galaxy Tab 3 8.0 will last at least a day, if not two or three days, depending on usage. Unlike a smartphone, tablets are generally used for long stretches and then left alone even longer.

I’ll say this about the Tab: I didn’t need to charge it when I wanted to use it. I tended to plug in the microUSB cord (the same port and current as a typical smartphone, which is convenient) every couple of evenings, casually, before bed, and then threw it in my bag the next day. Standby time was good enough that, even if I didn’t remember to charge it, there was always some juice remaining for a chapter or a quick level. 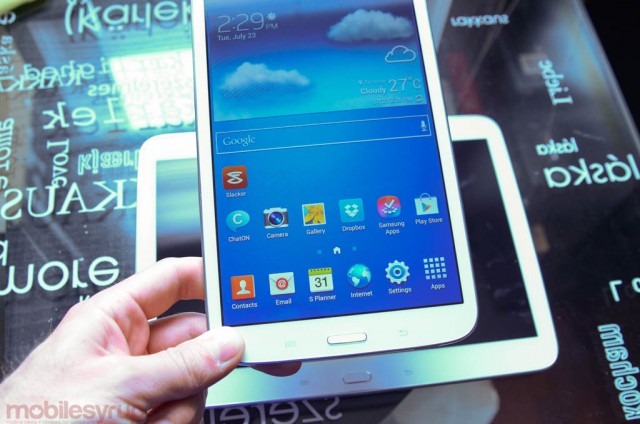 Before the introduction of the new Nexus 7, I’d have given the Galaxy Tab 3 8.0 one of my highest recommendations, claiming that for $299 you’re getting decent value for your money.

Now, in the cold light of reality, I’d check that recommendation, or at least append a note saying that unless the screen’s diagonal size is tantamount to resolution, speed and software updates, I’d suggest looking at Google’s new Nexus 7 tablet. At $50 less than the Tab, it’s just plain better value and likely an improvement in every way but a few over Samsung’s 8-inch slate.

Samsung’s made good use of its Galaxy Tab brand over the past few years, and the 8-inch version really is its best showing since the original 7-inch model all those years ago, but it’s not enough of a disruptor to recommend over the Nexus, and Samsung may be forced to lower its price to meet Google’s slate on the same level.