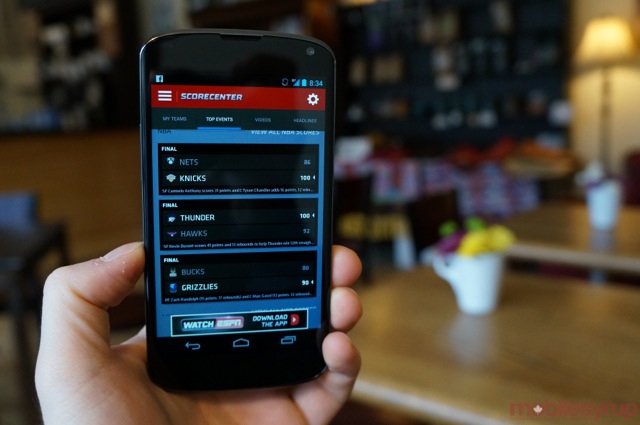 ESPN has done what few large brands have managed to pull off: they’ve redesigned one of their most popular apps, adhering to Google’s Holo design conventions, without ruining the user experience.

In fact, the new ScoreCenter app which, as its name suggests, allows users to follow sports or teams and track stats, watch videos and receive news alerts, is one of the most well-designed apps on my phone, which is no small compliment.

Users can receive push notifications for breaking news on their favourite teams, or track upcoming games with the app’s calendar integration. It uses a left-side navigation bar — think Facebook or Path — for getting around, and it performs wonderfully on even older devices.

It supports popular leagues like the NFL, NBA, NHL, PGA and USTA, along with various cricket, soccer and auto racing divisions. While the app is ad-supported, the single bottom banner is rarely intrusive.

If you’re a sports fan, or just someone who follows a couple teams, download ESPN ScoreCenter for Android.