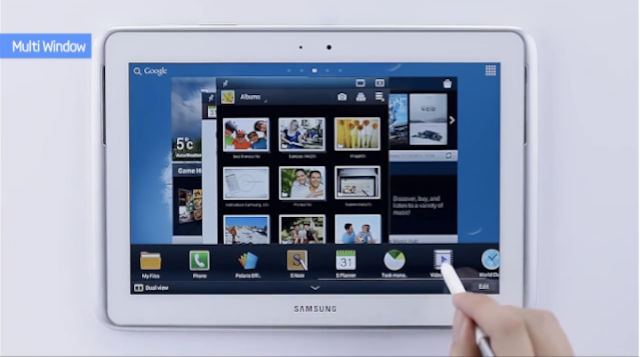 Samsung’s Galaxy Note 10.1 is a pretty versatile tablet, but it has been derided for poor performance and questionable build quality. While the latter aspect can’t really change until Samsung releases a sequel (Note 10.1.1?) the device’s software is about to get a lot more useful, thanks to Android 4.1 Jelly Bean and the company’s “Premium Suite” of apps.

The original Galaxy Note got the same boost when it was updated to Ice Cream Sandwich from Gingerbread earlier this year, and the upcoming Note 10.1 update promises truly useful inclusions.

Perhaps most importantly, the two-window multitasking, which wasn’t multitasking at all but merely two apps loaded side-by-side, will be changed to Samsung’s Multi Window feature. This allows up to 16 separate apps to be open at the same time (remember, the Note 10.1 has 2GB of RAM), each of which can be resized and pinned to a side of the tablet. This allows for real multitasking, something we’ve yet to see on a tablet.

Samsung is also bringing its S Pen preview feature, Air View, to the Note 10.1 with Jelly Bean. This allows users to hover above a photo album and preview its contents or, better yet, check ahead in a video clip without interrupting it.

Premium Suite will also include Adobe’s Photoshop Touch, as well as existing S Pen-based tools such as Knowledge Search, Easy Clip, Colour Picker as well as Shape and Formula Match.

The Galaxy Note 10.1 is currently available for $449.99 at select retailers. We’re not sure exactly when Canadian owners of the Note 10.1 will see Jelly Bean, but it shouldn’t be too long now.