Update: How to enable LTE on the Nexus 4 with Rogers, Telus or Bell (video) 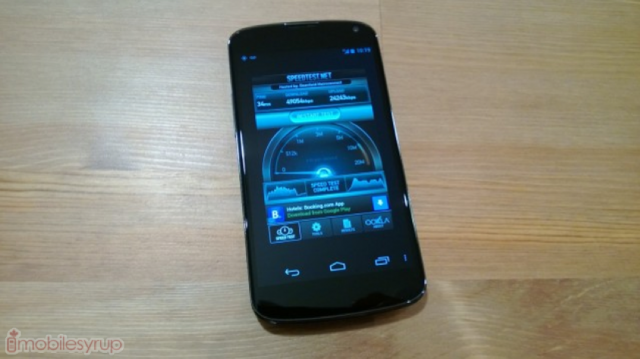 On this, the most exhausting shopping day of the year, we have another reason to celebrate. Due to the inherent LTE-based lineage of the Nexus 4, it was discovered that the device is compatible with Canada’s LTE networks by making a few tweaks to the device settings.

First, a disclaimer: we cannot guarantee that your phone will work properly after performing these changes, and we hold no responsibility for you messing up your phone, your life, or kicking a dog.

Now the good stuff. Because the Nexus 4 supports Band IV on LTE — that’s AWS spectrum running on 1700/2100Mhz — it can be activated on any LTE network in Canada by making a few changes. Note that this can be activated on Fido, Virgin and Koodo, but they will need their own unique APN addresses as well.

We don’t yet know how this will affect battery life on the Nexus 4, but rest assured we will be re-running our battery tests and network speed tests across all three carriers in the days to come.

1) First, you’ll need to go into Settings/More/Mobile networks/Access Point Names
2) For Rogers ONLY, add new APN: lteinternet.apn. Leave all the other entries blank for now. You can come back later to re-fill all the appropriate boxes.
2a) For TELUS and Bell, you can use the same APN as was populated when you put the SIM card in.

Note that you also need a LTE-provisioned microSIM card from your carrier, with a compatible LTE plan. Some older/legacy plans will not provide LTE coverage. In that case you’ll need to call your carrier to switch over to a new plan and purchase a new microSIM.

Let us know how this works out for you!

Update: After playing around with the phone all day, there are a few important updates to make.

First, the phone reverts back to “WCDMA Preferred” in the Phone Information menu upon reboot. This means that you’re going to have to enable “LTE/GSM auto” every time you restart the phone. You can download an app to quickly jump into the menu, but it’s a stopgap measure at best. We’re sure some custom ROM maker is going to build LTE into the phone sooner rather than later, but for now be aware that you’ll have to perform the change every time you restart.

Second, it appears that Google Now does not work when connected to an LTE network. It doesn’t seem to be APN-related, either; it works when “LTE Only” is selected in the Phone Information menu. It appears that something about setting “LTE/GSM” disables the data connection to Google Now. We’re investigating this issue and caution you on using LTE on the Nexus 4 if you rely heavily on that service.