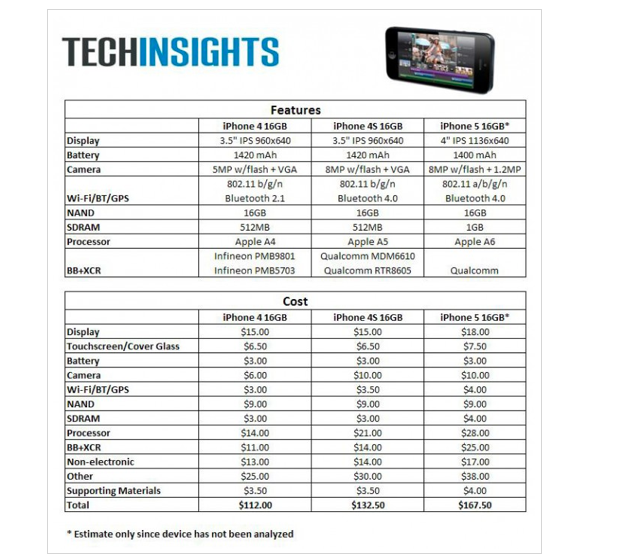 The iPhone 5 is going to be another huge success for Apple. This is a foregone conclusion. The company sold nearly 30 million iPhones last quarter, and that number is expected to grow with the introduction of the iPhone 5.

So how much profit does Apple make on each iPhone? We know that last quarter, with sales of 26 million iPhones the product line brought in approximately $16 billion in direct revenue, around 46% of the company’s entire take-home for the quarter. According to TechInsights, the iPhone 5 16GB has an estimated cost of around $167.50USD to manufacture; it sells for a minimum of $649 in the U.S. and $699 in Canada.

The biggest expenditure for Apple is the A6 chip, which costs $28; the Qualcomm baseband chip costs $25. That upgraded Retina display only costs Apple $18 to manufacture, only $3 more than the previous 3.5-inch part. While these are still estimates based on what TechInsights knows about the supply chain, it’s clear that Apple’s sizeable margin is no less than it was a year ago with the iPhone 4S. If each phone nets Cupertino $482, or somewhere close to it, you begin to understand why Apple has $100 billion sitting around in the bank, and is one of the fastest-growing companies in the world despite its size.

While we’d love to see the same charts for products like the Galaxy S III, it’s really Apple’s buying power — it buys millions of the same components at much lower prices than its competitors — that gives them access to newer technologies faster and cheaper.

At the same time, Apple Canada is charging $50 more per iPhone 5 than it did for the 4S, and carriers are charging $20 more for the 16GB model and $10 for the 32 and 64GB models than previous years — likely to offset upfront costs. It sure doesn’t look like the cost of the iPhone has risen drastically, so where is that extra revenue going? Straight to the bank.