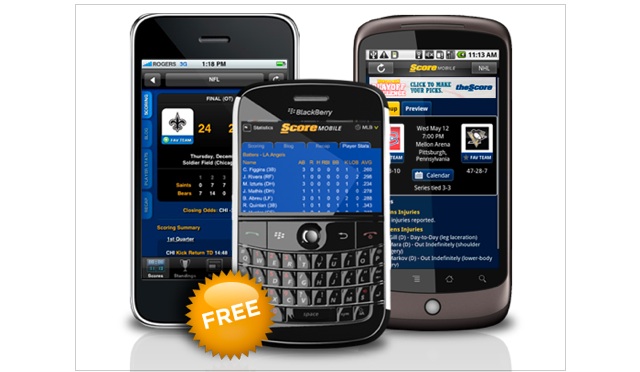 Toronto-based Score Media is best known for their ScoreMobile app and is apparently being snatched up by Rogers. The details are scarce, but the Globe is reporting that the deal will be made public after the market closes today. Score Media has been on the market for some time and was asking $200 million for their assets, which includes TheScore Television network (reaches 6.8 million Canadians), theScore.com (over 1.2 million unique visitors per month), various mobile applications, plus the 290 employees that help run the business.

The ScoreMobile, ScoreMobile FC and SportsTap mobile apps all have been downloaded millions of times and have a loyal following, specifically for those who track the NHL, NFL, NBA, MLB and NASCAR. The apps are available on the iOS, Android, BlackBerry, Windows Phone and Kindle Fire.

Both companies have declined to comment on the rumour. However, the ScoreMedia stock has been halted and surged up to 46% today on the speculation. This will be a very solid addition to the Rogers media brand and will give them an edge up in extending their reaching to sports fans via mobile. No word on how this will flow into Rogers current sports brand Sportnet.

Update: A press release just went out today, September 25th, by Score that confirms this news. “Under the terms of the agreement, Rogers Media will acquire all of the issued and outstanding shares of Score Media and a 10% equity interest in Score Digital for total cash consideration of $167 million (CAD).”

The deal is expected to close by October 2012. Full press release is below:

Score Media announces sale of Television Business to Rogers Media and spin-out of Digital Media Business
TORONTO, Aug. 25, 2012 /CNW/ – Score Media Inc. (“Score Media”) today announced it has entered into an agreement with Rogers Media Inc. (“Rogers Media”) pursuant to which (i) Rogers Media will acquire the television business of Score Media via an acquisition of all of the outstanding Class A Subordinate Voting Shares (“Class A Shares”) and Special Voting Shares of Score Media for $1.62 per share; and (ii) the digital media business of Score Media will be spun-out to Score Media’s shareholders as a new corporation to be formed under the Canada Business Corporations Act (the “CBCA”) (“Score Digital”). Shareholders representing approximately 30% of the outstanding Class A Shares and 100% of the Special Voting Shares have agreed to vote their shares in favour of the transaction.

“I am extremely proud of our team at theScore Television Network and the unique original content we produce each and every day,” said Mr. Levy. “As part of Rogers Media’s inventory of sports properties, its extensive programming assets and senior management’s commitment to securing premium sports content, I am confident the network will continue to grow and contribute to the Canadian sports scene.”

“This deal allows us to continue to pursue our vision and strategy that has formed a huge part of what we’ve been doing at Score Media for some time. We can now focus 100 percent on our digital products, building on the tremendous strides we have made in growing the international audience of our website and mobile apps.”

Rogers also noted that “The acquisition builds on Rogers’ rich history in sports and reinforces its commitment to delivering premium sports content to its audiences on their platform of choice. Upon receipt of final regulatory approvals, the television network will be rebranded under the Sportsnet umbrella.”