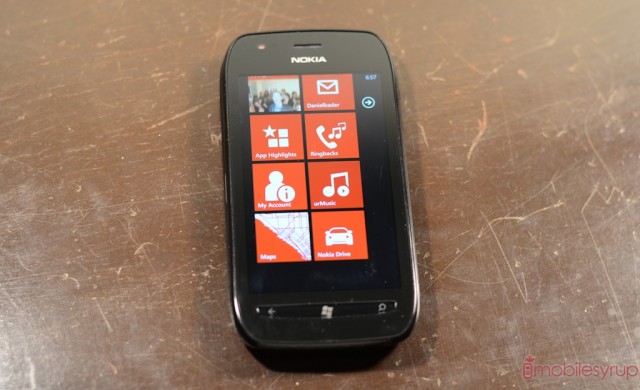 It was never a given that the Lumia brand would do much to right the lurching Nokia chip in North America, but based on feedback we’ve received from carriers and dealers, we have every reason to believe the reception has been largely positive. While a carrier would likely never admit to poor sales of a specific product, all the people I’ve spoken to have been categorically upbeat about the Lumia series.

“Rogers is proud to have the widest selection of choice for our customers. The Lumia 710 is proving to be a customer favourite and has been a great addition to our Smartphone Lite lineup. We’re also very excited to be the exclusive carrier of the Lumia 900, Canada’s first Windows Phone LTE smartphone,” said Reade Barber, Senior Director Data Product Management at Rogers.

Nokia’s Lumia series, which encompasses the inexpensive Rogers Lumia 710 and the flagship TELUS Lumia 800, are wildcards in a Canadian climate still enamoured with the iPhone, entrenched with the BlackBerry and growing fonder of Android. Unlike in the U.S., where BlackBerry’s market share has plummeted to under 10%, it is still the King of the Hill in Canada.

But after speaking with several Rogers dealers, commenting under anonymity, most of them are surprised by the swift sales of the Lumia 710. One dealer said, “I sold quite a few and it’s a great Windows based phone. We sell quite a lot because in the Corporate market, [where] this handset is $0 on a voice only or voice/data plan for most companies we deal with. [The phone comes with a] free 1hr Nokia Technical Support session where the Nokia agent will answer any questions for the Lumia.” Another dealer said, “[It’s a] very good unit, we sold a bunch,” likely because the phone is so cheap. Only one dealer said that he hadn’t sold many, but those customers were very happy with them.

Rogers sells the Lumia 710 for $29.99 on a 3-year term and $255 outright as a part of its Smartphone Lite lineup. It’s a competitive price for a device that trounces most of the similarly-placed Android devices by a wide margin. But when you ask the average person walking down the street if they’ve ever used, or even heard of, Windows Phone, and you’ll likely get a blank stare. Nokia has entered the landscape in an attempt to change this.

TELUS’ Brent Johnston, VP of Mobility Solutions, was more pointed in his comments on sales of the $29.99 Lumia 800: “We are very pleased with the sales performance thus far, with Lumia sales meeting our expectations.” Whether those expectations were low to begin with is not yet known, but despite the warm response I have yet to see any Lumias in the wild.

That being said, I have been using the cyan Lumia 800 as my daily driver for a few weeks now, and whenever I take it out of my pocket in public, I usually get at least one person asking me about it. After I briefly explain the lineage (Nokia), the OS (Windows Phone), the benefits (speed, form factor, camera), the drawbacks (apps, notifications), the majority of people are wildly positive about it. Those that aren’t are typically happy with their phone choice, be it an iPhone or high-end Android and find no reason to change. Those that are most excited about it are low- to mid-range Android and BlackBerry users, tired of the constant performance issues.

This is a wide open market, especially as the BlackBerry brand starts to recede in Canada. Nokia is pricing the Lumia ridiculously low, and we’re expecting the Lumia 900 to launch at under $100 on a 3-year term, too. Microsoft has committed millions of dollars to promoting Windows Phone around the world, and is pumping money into developers’ hands for hero apps that the platform desperately needs.

More than anything, though, it is the carriers’ responsibility to communicate the benefits of Windows Phone to their customers. Both Rogers and TELUS seem to be doing this to some extent, with large displays in-store and prominent placements of the devices in their advertising. But it will come down to cooperation between Microsoft, Nokia and the retail sales infrastructure to effectively push the right product to the right customer; at the moment, too many folks are being wrongly paired with low-end Android devices that don’t hold up over time.

A year from now, while nothing is certain, it wouldn’t be too outrageous to see the Lumia series consistently high on the sales charts in Canada, especially if the core message is communicated consistently: simple, powerful, beautiful.