Apple holds onto 54.7% of tablet market share in Q4, while Samsung languishes at 5.8% 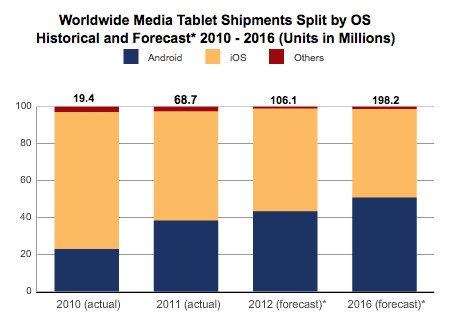 It’s no secret that Apple holds the hearts and minds of the tablet market, as well as the majority share. But it may surprise you to know that despite growing revenue, their market share has been steadily declining over the past year. Why the discrepancy? The size of the market itself is growing, and therefore we are using a wider berth to accomodate all things considered “tablets.” In many eyes, however, iPad is still the only game in town.

In Q4 2011, Apple’s market share dipped from 61.5% to 54.7% as the Amazon Kindle Fire rose to meet the challenge. Overall, however, despite Amazon capturing 16.8% worldwide market share from its US base alone, Apple still outsold the Fire almost four to one. Apple sold 15.4 million iPads in Q4 over Amazon’s 4.7 million. On the other hand, Samsung’s 5.8% market share amassed a total of 1.63 million sales, not coming close to its enormous Android smartphone market share.

Total tablet sales in 2011 increased to 68.7 million from just 19.4 million the year before, and IDC expects that figure to top 106 million in 2012. They also expect iOS to lose its majority share by either the end of 2013 or beginning of 2014, with Android making a slow creep like they did in smartphones. However, Apple’s dominance is never expected to wane in the tablet market as the success of Android smartphones relies on carriers pushing the product, which isn’t possible in the largely carrier- and contract-free tablet environment.

Check out all the details over at IDC.