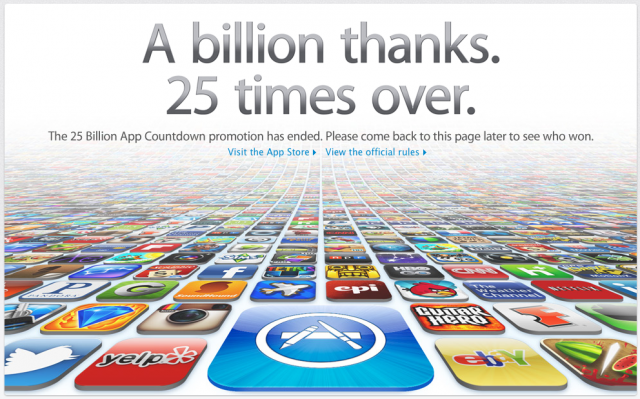 Apple kicked of an official countdown to 25 billion app downloads a couple weeks ago… and today the massive milestone was achieved. Huge numbers for just under 4 years. The Apple App Store was launched in July 2008 and reached its first billion downloads in 9 months (April 23rd, 2009), then passed the 5 billion download mark on June 23rd, 2010. The next milestone was 10 billion, which occurred a mere 6 months later on January 22nd, 2011. Now, 13 months and 15 billion app downloads later, Apple has passed 25,000,000,000. There’s no word yet on who downloaded the app, or what app it was, but whoever it is will score a $10,000 App Store gift card. Most likely the next major milestone that Apple will deem big enough to celebrate will be the 50 billionth app download.

Apple noted on their site that “A billion thanks. 25 times over.”
Source: Apple