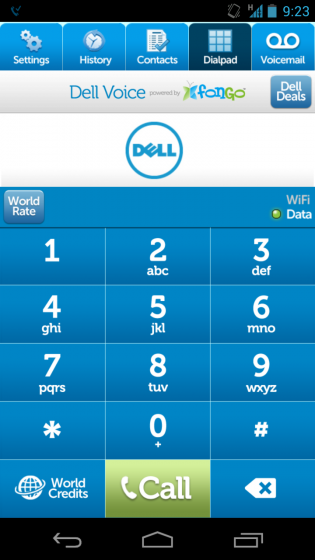 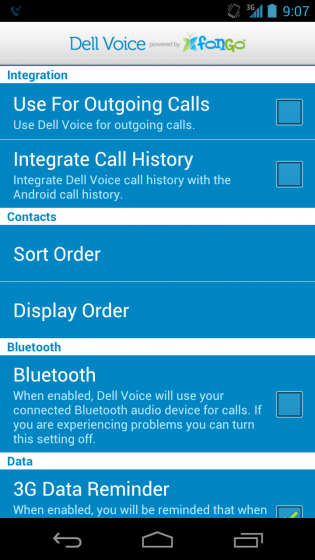 The mobile VoIP app industry is awash in competition these days as every telco is trying to cash in on the action. The mobile carriers have an incentive to keep its customers using voice minutes, while companies like Skype, Vonage and now Fongo, through a sponsorship with Dell Canada, is next in line.

Today Dell and Fongo are launching Dell Voice, a mobile VoIP app that allows you to obtain a Canadian phone number and make free calls to numbers in 30 large metropolitan areas, including Toronto, Montreal, Vancouver, Calgary, Edmonton, as well as hundreds of smaller cities. Incoming calls, regardless of location in Canada, are always free. International calls can be made by purchasing credit, and countries like the U.S. and U.K. are 2c/min, 0.7c cheaper than Skype.

The service offers things for free that its competitors charge for, including call display, call waiting, voicemail and, surprisingly, 911 emergency service.

The interface is sparse but usable (though a little clunky on Android), but call quality is good over 3G and even better over WiFi. The company claims that one minute of calling uses 1MB of data, so beware those long calls home to mom and dad. It’s likely the high bitrate codec used that accounts for the extreme bandwidth usage. While I was able to hear the person on the other end as clearly as a regular call, my recipient told me I sounded distant and muffled.

One of the advantages of Dell Voice, on Android at least, is that it can be integrated into the existing Dialer app, which means you can force all outgoing calls to use your Fongo number; for those without a long-distance plan, this could be a godsend. As well, if you’re so inclined you can port your existing cellphone number over to Fongo for $25 and take advantage of the free local calls and low-cost international rates.

An issue I encountered on Android is that it doesn’t appear the app can be killed. This is not entirely true, though: to exit the app, head into the Settings/Account tab, and use the menu button to Exit or Log Out. A bit convoluted, but at least it’s available.

Dell Voice is available for Android, iPhone and, soon, BlackBerry. There is also a Windows desktop version. Check out the website for more information.