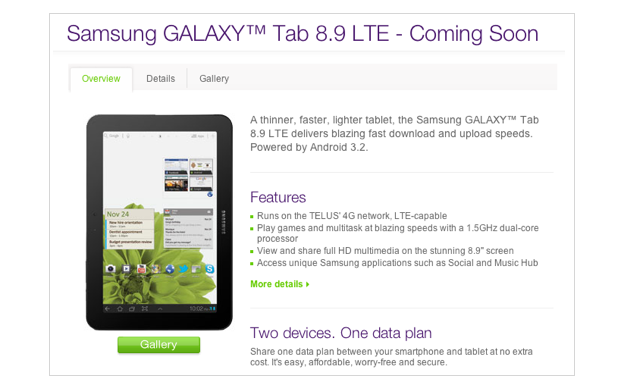 TELUS set their 2012 financial targets yesterday and for wireless they expect to bring in between $5.75 to $5.9 billion, up 5.5 to 8% – mainly driven by a “growth in data and roaming revenues” and “healthy additions of wireless smartphones”. In addition, TELUS is expecting to launch their LTE (Long Term Evolution) network in 2012. The press release stated we can expect to see it go live “in urban markets”, so most likely the similar locations as Bell and Rogers in Toronto, Ottawa, Vancouver, Montreal.

One of the first devices that will be able to reach LTE speeds on TELUS’ network is the Samsung Galaxy Tab 8.9 LTE. This Android 3.2 Honeycomb tablet is now listed on their website as “coming soon”, but also indicates that it “runs on the TELUS’ 4G network”. Bell recently released this for $429.95 on a 3-year term and $649.95 outright – so depending on when TELUS releases it you can expect similar pricing.

More here at TELUS
(Thanks Kevin!)