Video: Another Ottawa bus driver gets caught using his phone while driving 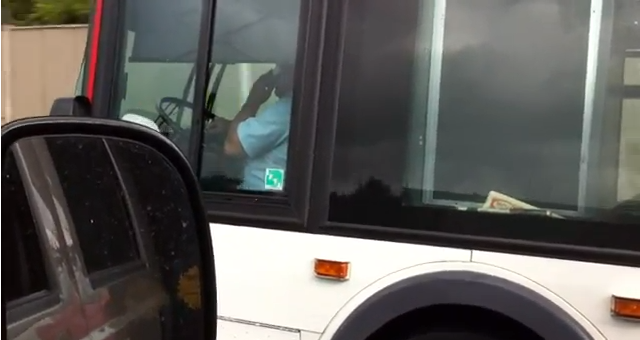 Using your handheld device while driving is an illegal offense in Ontario, plus in other provinces. To the everyday driver this became law 2-years ago, but if you’re a OC Transpo bus driver this has been enforced since 2004 – so plenty of time to get used to it. Bus drivers have a responsibility to keep passengers safe and using their mobile device while on the job has once again come back to bite them. Back in February a bus driver was caught on camera using their phone, the OC Transpo stated the individual “will face disciplinary measures, up to and including dismissal”.

Now a new video has surfaced online that clearly shows the bus clocking down the road and the driver talking on his phone. Apparently the driver has been on the employed for 25 years and has a clean record, well until now. Gerry Vlug posted the video on YouTube and stated that “I think it’s important for people to see this because it’s a safety issue. It’s not right, they’re public employees doing a public job, hired by the public for the public and they should know they’re in the public eye regardless.”

In response, a similar statement was issued by OC Transpo, General Manager Alain Mercier said that it’s illegal to “talk, text, type, dial or e-mail” and that “individuals who do not follow OC Transpo policies and provincial law face disciplinary measures, up to and including dismissal when warranted”.