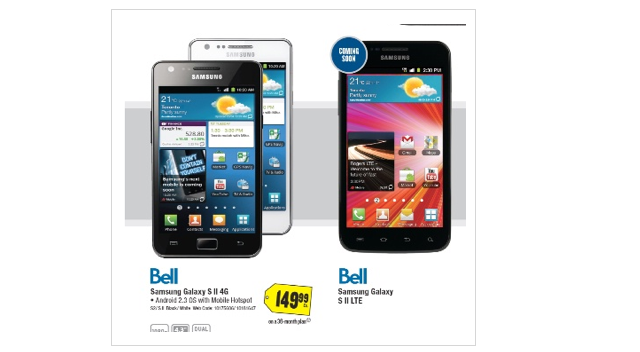 These days you never know how long carriers have device exclusives for, could be a couple week, 1-month or completely exclusive and no other carrier could add it to their lineup. Rogers stated that their first LTE device, the Samsung Galaxy SII LTE, is “a Rogers exclusive device”. However, this Best Buy ad shows it could be coming to Bell’s LTE network too. It’s been graced with the “coming soon” label and personally I think it’s a printing error, none of Bell LTE tips we’ve received shows this on Bell’s device road map, plus the image also has a shows the Rogers LTE network.

Update: We’ve heard back from our friends at Samsung and they stated there was a production error in the flyer and it’s incorrect. The Galaxy SII LTE is not going to Bell, it’s a Rogers exclusive device.