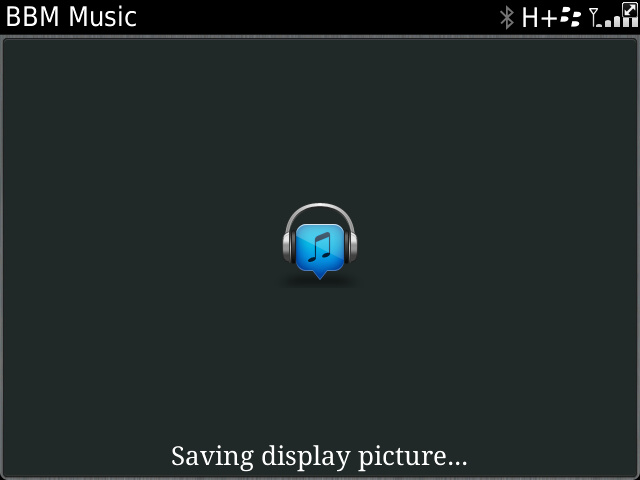 We were lucky enough to be given access to the closed beta of BBM Music, the latest venture buy RIM to expand the reach of BBM6 and its third-party integration. At its core, BBM Music is a natural extension of the BBM social network. For $4.99US per month, you have access to 50 songs in a library of millions. But each friend of yours who also uses the service gives you access to their 50 songs. The more BBM friends you have using Music, the more songs you can listen to.

So, I have 30 BBM friends, which I think is on the low side, but let’s say it’s average. If every person in my list paid the $4.99/month for BBM Music, I could theoretically have access to (50×30) songs, or 1500 tracks. While that doesn’t seem like much, to the average music consumer who listens to a few songs a day, often the same ones, will find a lot to like about the service. “The 50 song profile is a way to describe oneself,” says Alistair Mitchell, RIM’s vice president of BBM platform and integrated services.

“It creates this distillation of what music really matters to that person, which is a benefit to the collective. Your friendship circle gets the benefit of everyone having put in their best effort to create their distilled favourite collection of music.” 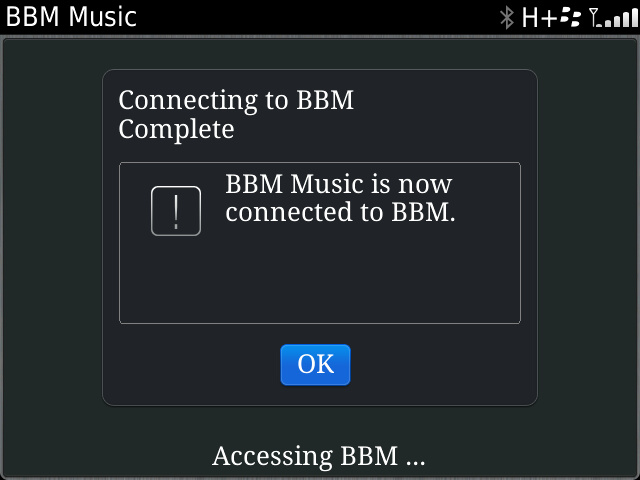 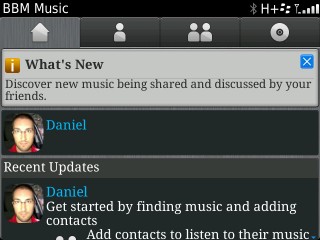 The Service:
As I said, it’s a pretty simple service. You download the application (there is a one-month free trial for anyone in a supported country), connect it to your BBM6 (which you must have already installed) and begin searching. The interface is well organized with four tabs on the top: Home, You, Friends, and Search. Home is basically like your feed, where you will see your latest activity and the activity of your friends. When you download a song, add a tune to a playlist, or a friend does the same, it will show up on this feed. 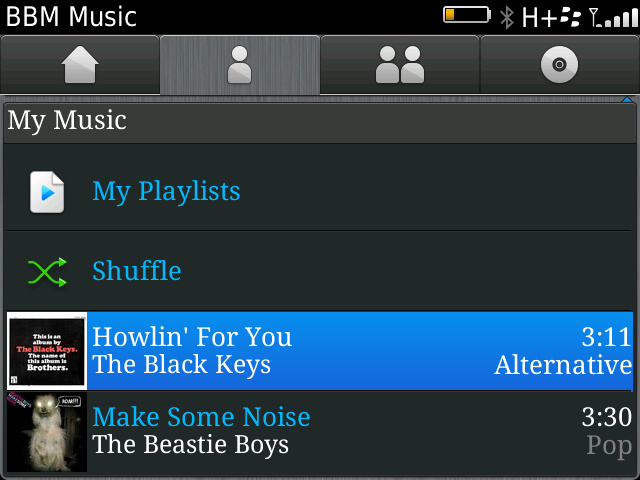 The You column contains all the music you’ve downloaded. You have access, like in iTunes and most other services, to 30 seconds of any song, but once you’ve decided to “purchase” or “own” the song for the money it will show up in this column. 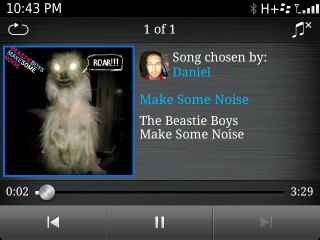 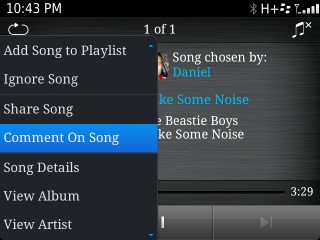 The music playing interface is very similar to the one found in the BlackBerry media player: currently sparse but functional. You can randomize or repeat, and you can choose to ignore a tune, which will skip it from the main rotation or any playlists that it’s in unless explicitly clicked on.

You can comment on a song, which your contacts will see, or share it via BBM, BBM Group, Email or PIN. The share will link back to the app, not an outside application like Amazon; RIM is trying to keep user interaction to within its own services, which is smart. 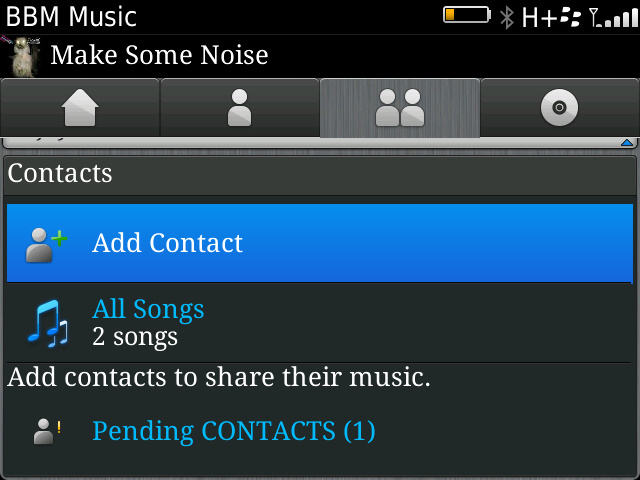 The Social:
Due to the heavy social aspect of BBM Music, if users don’t catch on the who entire service will become stagnent very quickly . It is very easy to add contacts, though at the time of testing I had only one person available to add. Presumably in the Sharing tab any songs shared by your contacts will appear under their name, as well as in a consolidated list under All Songs.

Comments are a very interesting aspect to the service, though I’m not sure how often they will be utilized. I can imagine a few interesting conversations coalescing around a group-beloved track, or a suggestion for tracks similar to the one being listened to. You can actually see all of your comments, and the comments of your friends, under their profile. This makes it easy to discover songs that they have taken time to tag. 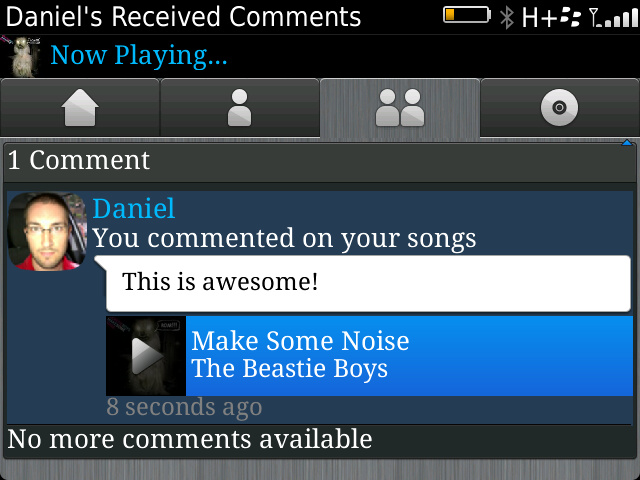 Once there is more activity on the Home tab, and more comments on individual songs, I can see it being a lot of fun to scroll through my friends’ choices, picking out my favourites and starting conversations. Music says a lot about a person and it’s often an ice breaker when you’re just getting to know them. Much of the success of this feature will rest on how many people actually sign up for the service; a barren social network makes for some lonely sharing. 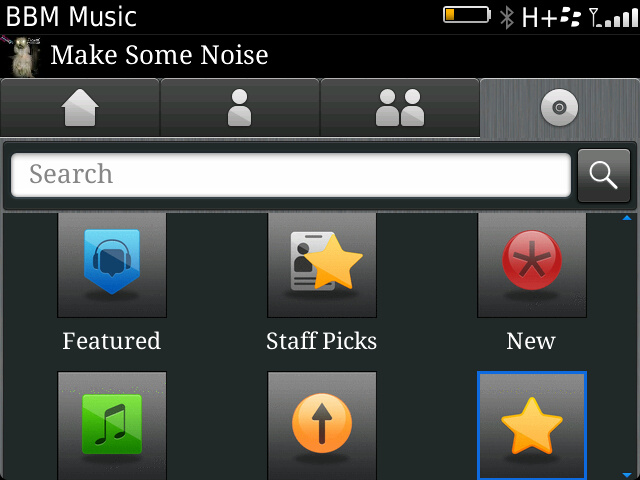 The Music:
Music, after all, is the main attraction, so I’d hope that the interface was easy to use and intuitive. Laid out much like the App World, I found that I had to do a lot of scrolling on my Bold 9900 due to the landscape-only nature of the screen. That there are six sections is great, and it’s nice to know there will be lots of curated content from RIM itself. At the moment the catalogue is a bit empty, RIM promised millions of songs when it officially launches, but there are some notable selections.

I was able to pick out some Beastie Boys, Bon Iver and Black Keys (perhaps I was in a B mood?). The selection process is fairly easy: just find an album you like, and next to the song under the album title is a Plus sign (+). Click on that and it starts downloading the song, syncing it to your device. Unfortunately you need a microSD card to actually download the song for offline playback: the internal storage on your device will not suffice. If you do have an SD card installed, you can manually Cache Song via the BlackBerry menu to store it for offline playback. 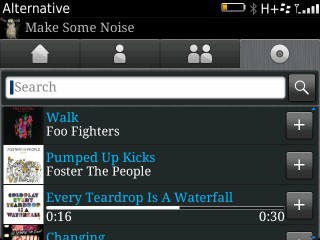 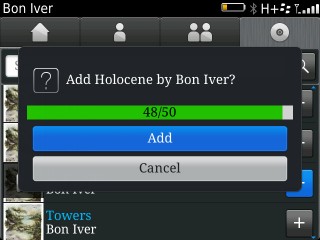 I found sound quality to be about average for one of these services, though maximum volume on my Bold 9900 is definitely above average for a smartphone, and I was able to enjoy the music through either headphones or the speaker.

From the time you download the song, depending on your 3G connection it takes very little time to start playing the full track. On average it took less than 10 seconds to fully cache song.

Some genres are underrepresented at the moment, but that’s in line with who RIM is aiming the service at. Lots of hip-hop and R&B from artists like Common and Flo Rida; tons of pop from Lady Gaga and Beyonce; plenty of alternative like Foo Fighters and Coldplay. At this time the genres are: Alternative; Dance & House; Pop; Rap; R&B; Rock.

Conclusions:
It’s hard to say from my initial interaction with the service whether it will be a success. For that you’ll have to ask me in a couple months, when more of my BBM contacts are using it. I’d imagine that once the service gets going users will begin seeking out other people, often randoms, to buttress their defences and add more songs. Your enjoyment of BBM Music is going to be directly linked to the people in your life, so there is incentive to seek out others who not only have similar tastes in music, but those who don’t, opening up new sonic doors. At least that’s what RIM wants it to be. 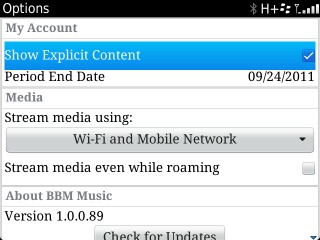 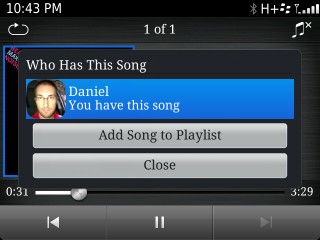 As long as the catalogue keeps growing along with the user base, I don’t think RIM will have any problems finding success.

A couple quibbles: though unconfirmed, it is believed that you will only be able to switch out 25 out of your 50 songs every month. Whether or not this is a licensing issue or a user experience issue remains to be seen, but it’s a strange limitation nonetheless. The inability to save songs to internal storage is also a bit of a pain, since new Blackberry’s like my Bold 9900 come with plenty of internal storage that isn’t being used.

When the service comes out of closed beta and everyone in Canada can try it free for a month, I’d recommend you give it a go. If nothing else, you’ll discover some new music, or be able to make fun of your friend for liking that really awful track. More than anything, remember like BBM, BBM Music is a social network first and a discovery engine second. Its success, and your enjoyment of it, will be directly linked to how much time you put into it.