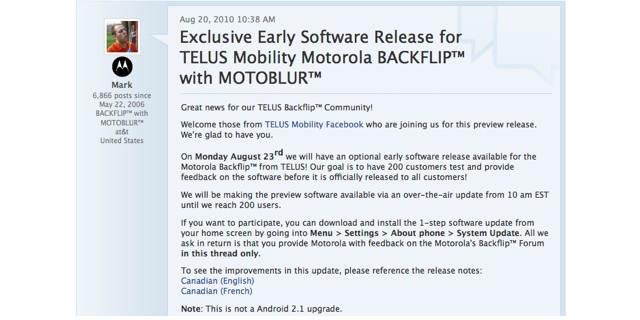 For all the TELUS Motorola Backflip owners out there who are waiting for the next upgrade, it’s coming soon. Kinda. Motorola has posted a note on their support forum that this coming Monday 200 lucky Canadians will be fortunate enough to get the latest release before it’s officially made public.

Moto states that “On Monday August 23rd we will have an optional early software release available for the Motorola Backflip from TELUS! Our goal is to have 200 customers test and provide feedback on the software before it is officially released to all customers! We will be making the preview software available via an over-the-air update from 10 am EST until we reach 200 users”. If you want in on this all you have to do is from your home screen hit the Menu > Settings > About phone > System Update.

Good luck to the 200 chosen ones, let us know how it goes.