Virgin ads removed for being “too provocative” 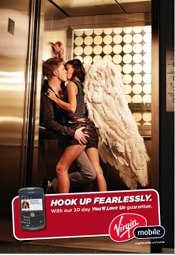 Virgin Mobile is one of those brands that actually take risks when it comes to advertising. Even their contests are bold, out there and incredibly fun.

Across Canada you’ll see the their latest ad campaign “Hook Up Fearlessly” plastered on billboards and bus stations. The ads show couples making out in unique areas. Over in Calgary the bus ads were removed after customers took offense to them, or as Calgary Transit spokesman Ron Collins said “were a little bit too provocative”.

Virgin Mobile spokesman Nathan Rosenberg said “It’s quite interesting for us because these are the sorts of images people are bombarded with every day. We don’t think that we’re actually doing anything that encourages people not to express their love in a healthy relationship or in a healthy kind of way”.

** Update: Mississauga  has now also pulled the ads. By the amount of press this story is getting they will not need to spend money on bus ads, which probably in Virgin eyes is a very successful campaign.