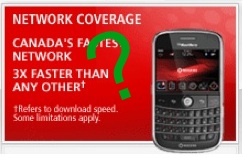 Back in January Rogers filed a complaint with the Advertising Standards Canada (ASC) stating that Bell Mobility went against the Canadian Code by placing the statement “fastest and largest network across North America” in one of their ads.

Today, TELUS joined the game and filed a suit with the Supreme Court of British Columbia and sued Rogers for apparently misleading the Canadian public with some of their ads stating they are the “fastest and most reliable” network.

We reached out to TELUS for further explanation and Shawn Hall, TELUS spokesperson stated:

“TELUS’ sole interest in filing this suit is to have a competitor remove a false, misleading, and harmful claim from their advertising. In light of our recent launch of Canada’s largest 3G+ network, Rogers has no network advantage and they should not be misleading the Canadian public with false superiority claims.

Making a big claim in bold type and then trying to use fine print to restrict the claim to a comparison against just our old network and select criteria is clearly misleading to the public. We kindly asked them to remove the claim recently, and they refused. This lawsuit, while unfortunate, is our only recourse.”

In response to these claims, Rogers sent us a note with their comment: “We stand behind our claims. All of our internal and third party external testing since 2007 has consistently demonstrated that we have the most reliable network. We’ve established our reliability over time with millions of customers on our network. Telus has not submitted any data on their network performance. We look forward to vigorously defending our position in court.”

More on this shortly