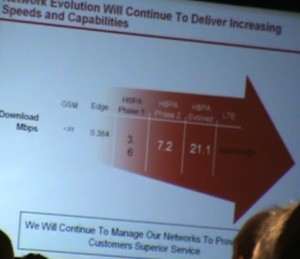 Rogers announced back at the end of July that they will start to build out their HSPA+ (High Speed Packet Access Plus) network. We are expected to see speeds of a maximum 21 Megabits per second (Mbps), compared to the 7.2 Mbps we are getting now.

Today, Rogers has stated that we can pre-order online ($74.99 on contract) the new 21 Mbps HSPA+ Rocket Mobile Internet Stick as the network has been pushed live in Vancouver, Calgary, Toronto, Ottawa and Montreal.

When this new HSPA+ network was originally announced we confirmed then with Rogers that no current devices will be able to handle this speed. Devices will be introduced over the next several month. In addition, this is only for Rogers and not Fido.

I’m curious to see how TELUS or Bell feel about this news. We previously posted a story about Bell’s reaction to the Rogers HSPA+ announcement. The internal document we had stated reasons why they are “not concerned”. One of the “Key reasons” was that “Rogers deployment of HSPA+ will start in August with a progressive roll out of the pocket coverage in the Greater Toronto Area ONLY.”

At the 2009 Canadian Telecom Summit on June 15th that Nadir Mohamed, Rogers President and CEO of Rogers, said “To me we are now entering the sweet spot of HSPA deployment 7.2”. Clearly with today’s announcement Rogers is very serious about this roll-out, especially since they have announced it for 5 cities at once. We just want to see this on some Smartphones, rather than an internet stick. However, congrats on being the first carrier in North America.