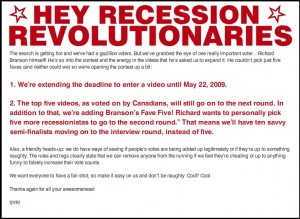 Looks like the fine folks over at Virgin Mobile have extended their “Screw You Recession Intern Search”. This is the chance to become part of the Virgin staff for the summer, get $2,000 a month for 3 months, a laptop, BlackBerry and a Flip video camera to “spend their days searching for stories, digging for deals, interviewing financial experts… and just generally telling the recession where to stick it.”

It was supposed to end today, but they got a boost from the greatest entrepreneur of all time, Sir Richard Branson. According to Virgin, “The search is getting hot and we’ve had a gazillion voters. But we’ve grabbed the eye of one really important voter… Richard Branson himself! He’s so into the contest and the energy in the videos that he’s asked us to expand it. He couldn’t pick just five faves (and neither could we) so we’re opening the contest up a bit”.

From looking at all the entries, a total of only 32 so far, they have added new twist to this competition: “Branson’s Fave Five!”. That’s right, Sir Richard will personally pick 5 who’ll go to round 2. So now a total of 10 ten will be moving on to become a semi-finalists.

Looks like your chances are getting better every day. Learn more and get your video in here.

Check out this video of your competition: