The tech giant made up 44 percent of the market

Apple dominated the tablet industry in 2019 despite a slowly growing global market, according to a new report from Strategy Analytics.

The report looks into the global tablet applications processor market, which means that it compares Apple’s A-series chips with those manufactured by Intel, Qualcomm, Samsung and MediaTek in terms of revenue.

The research firm’s focus looks into the value of chips being manufactured and used in devices, and does not consider the number of chips that were produced. 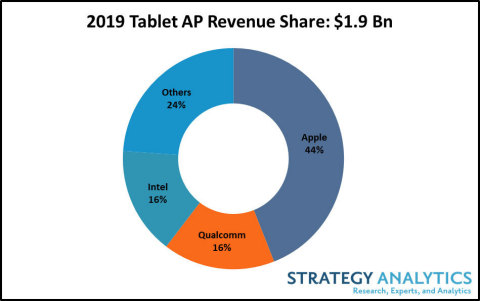 The report shows that the applications processor market grew two percent and reached a total of $1.9 billion USD (about $2.6 billion CAD).

Apple accounted for 44 percent of the total. Intel and Qualcomm followed with 16 percent each. MediaTek and Samsung accounted for the rest with 24 percent.

It’s important to note that although Samsung uses its own chips and also sells them to others, Apple does not offer its chips for use by other companies. Also Intel, Qualcomm and MediaTek offer their products to several tablet vendors.