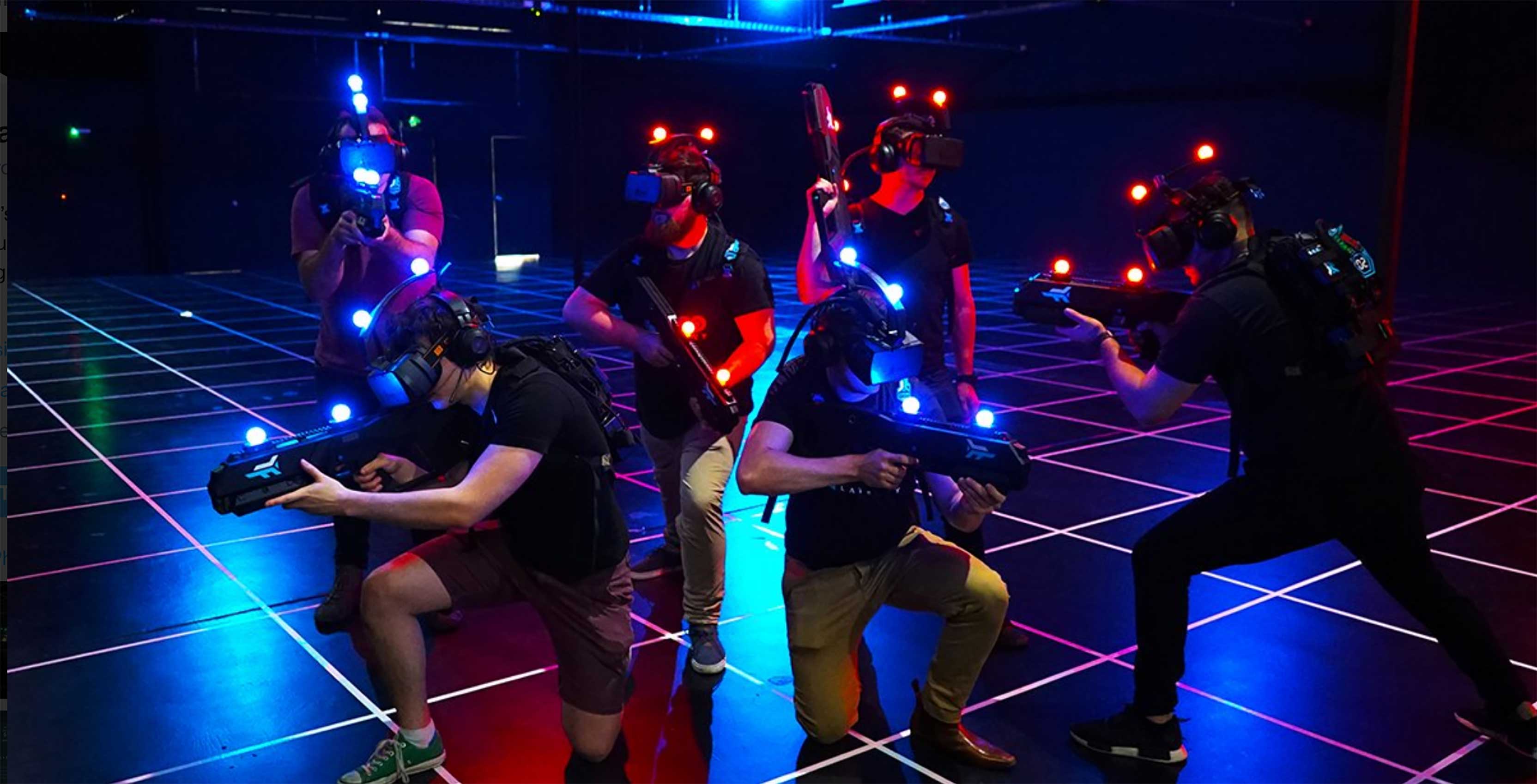 I’ve felt for a while that VR entertainment centres can play a key role in the adoption and growth of the medium. VR isn’t exactly an accessible technology, both in terms of ease-of-use and price, which makes the prospect of public pay-to-use VR all the more appealing.

That’s where places like Virtual Galaxies coms in. I’ve been to several VR arcades before, as well as The Void at the Cineplex-owned Toronto Rec Room, but I’ve never quite seen something like this.

Located in Mississauga, Ontario, the facility sports a 2,200 square foot gaming area ripe for all kinds of free-roam VR experiences. Specifically, the wide warehouse space means that eight-player VR games can be played, which you likely won’t find at most other places. 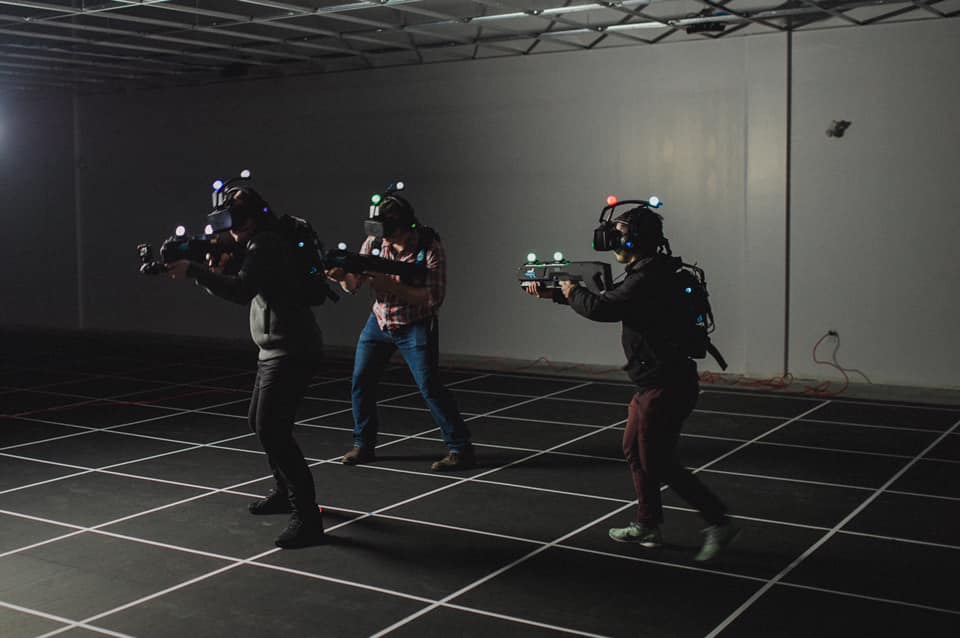 Having just opened at the end of 2018, Virtual Galaxies currently only has four experiences: Singularity (a sci-fi shooter set in space), Outbreak Origins (a zombie survival shooter), Engineerium (a combat-free adventure focused on exploration) and Zombie Survival (a tower defence-style zombie shooter).

Throughout all of these experiences, you and the other players are provided a backpack and connected VR headset to wear, as well as a headset to communicate with each other. For the purposes of our demo, my two friends and I were able to try out Engineerium and Singularity.

The former, which we started our demo with, is a very good way to ease you into this type of free-roaming experience, especially if you’re a VR newcomer. Engineerium is set in a mystical, tropical world that you and your friends must navigate through. The experience features very little in the way of gameplay, outside of walking around and stepping on tiles to open up pathways.

Instead, the real highlight comes from the sense of immersion in the beautiful environment, as well as the social interactions that come about in it. It’s always great to hear the reactions of people who haven’t tried VR, as was the case with one of my friends. This was particularly amusing when Engineerium has you walk on winding pathways in zero gravity. Of course, you’re only walking on flat terrain in the real world, but the VR tech does a clever job of tricking you into thinking you’re sideways or upside down. It’s quite a trippy experience and makes for some thrilling moments, although it’s a bit on the short side.

Our more meaty VR experience came in the form of Singularity. In an Alien-style premise, you and your friends will assume the role of space marines that are investigating a derelict space ship. At the start of the game, you’re given a physical toy gun that you’re able to use to aim and shoot in the game. Different ammo types (which includes a shotgun, rifle and railgun) and a shield that can be brought up by raising your gun in the air offer some nice variety. This brings a welcome level of tension to Singularity since you need to be quick not only in your aiming but also in your ability to swap between gun types on the fly.

The actual ship itself is also surprisingly varied in terms of design. Many areas have several bits of cover that you can duck behind and pop out from accordingly, while even the more scripted moments offer their own level of dynamism. In one encounter, there was a control room connected to multiple doorways that kept spawning enemies. As a result, we had to work together to repel the incoming hordes while also working on the control panel. This was particularly important if one of us took too much damage and got downed, forcing us to wait a number of seconds to respawn.

Another area had us separated until we reached a large Phantom Menace-style conductor room, with two of us navigating one narrow energy platform while the other had to do the same farther up ahead. Covering each other as we slowly walked along the path made for a wonderful sort of team synergy that I’ve never really gotten in traditional multiplayer experiences. At the same time, there’s a bit of friendly competition at play since you each get rankings at the end. From beginning to end, Singularity is a rollicking good time.

While Virtual Galaxies’ games certainly lack The Void’s big-name appeal of experiences based on the likes of Star Wars, Ghostbusters and Wreck-It Ralph, they more than make up for that with a greater sense of freedom and engagement. All the while, the precise body tracking tech ensures that you get ample warning each time you get too close to a wall or another player.

There are a few quibbles and uncertainties, to be sure. To start, one of my friends and I wear glasses and have rather poor vision without them. Unfortunately, though, we weren’t allowed to wear them in the Virtual Galaxies experiences as the company says they may scratch the VR headsets’ lenses.

For the most part, the visuals are still solid otherwise, given that the headset’s lenses are so close to your eyes. Still, it would be nice to find a glasses-friendly solution, especially when this isn’t a problem at The Void or when using consumer products like the PlayStation VR at home.

Further, as noted, we only tried two of the four games, so I can’t speak to the quality of those other two experiences. It also remains to be seen just how frequently Virtual Galaxies will refresh its catalogue with new and compelling experiences.

Based on what I have tried, though, I can definitely recommend giving this a shot, especially with a group of friends. I only had a party of three and still had a great time, so with even larger squads, I can imagine it being even more of a blast.

Sessions also last between 15 and 45 minutes depending on the game, giving you significantly more time than you end up having in The Void or other venues.

Game sessions are $49.99 per person, with discounted rates available if you buy tickets for multiple experiences at once. Bookings can be made here.