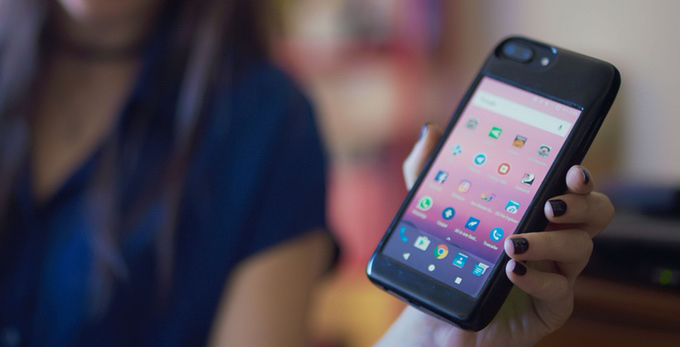 Eye’s Kickstarter campaign is one of those projects you come across that seem incredible cool, yet not very practical, and more than likely will never come to fruition.

Israel-based Esti, the company behind the fascinating accessory which adds an Android phone to any iPhone via a removable case, just launched a Kickstarter that has already surpassed its $95,000 USD goal, amassing $131,323 with 31 days left in its campaign.

One side of the Eye is an iPhone and the other is an Android device. The case shares the speaker, microphone and camera with Apple’s device, but can also act as a standalone smartphone.

It’s important to keep in mind that using the Eye isn’t running Android on an iOS device. Instead, the case accomplishes basically the same thing as duct taping an Android device to the back of an iPhone.

As someone who is interested in tech, especially dongles and weird accessories, I find the Eye fascinating, though it also doesn’t really have much of a purpose.

It’s also worth noting that Esti has never actually shipped a product before and that those interested in backing the company’s Kickstarter campaign, as polished as the company’s launch video is, should be wary of this fact.

Eye is available to back on Kickstarter for an early-bird price of $95 USD without 4G (which amounts to about 128 CAD) or $129 with 4G (approximately $173 CAD). Esti aims ship its case to backers in August or September later this year. The case will be available for the iPhone 7, 6s and 6, as well as the iPhone 7 Plus, 6s Plus and 6 Plus. The company also says that “the next iPhone will be supported a month after its launch.””

Oh and the company’s founder, Joseph Sabri, describes Eye as the “coolest and dopest” case ever, so there’s that.