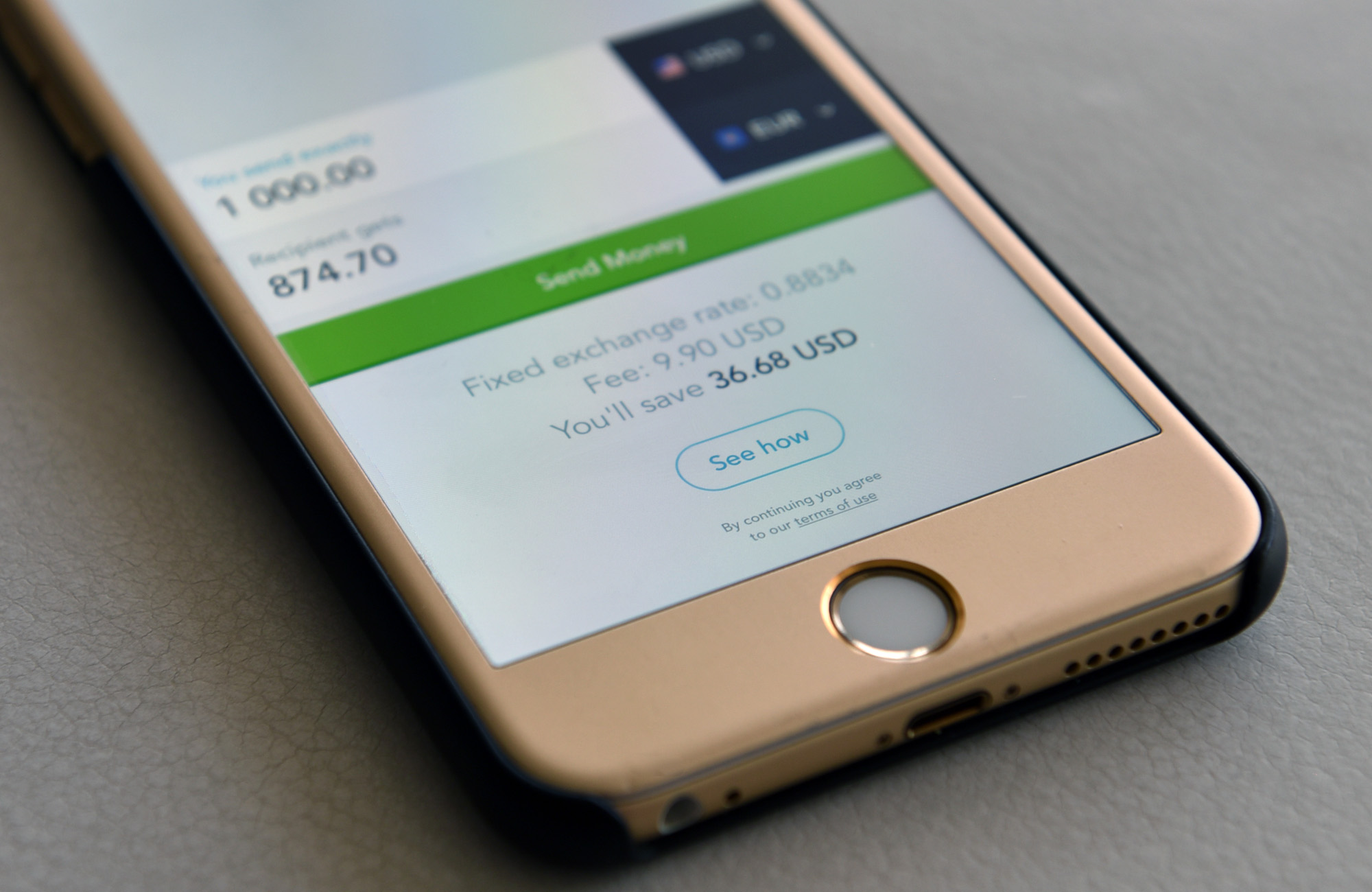 Currency exchange. It’s something many have to deal with, as rates fluctuate and options remain limited in moving funds from one country to another. TransferWise has now launched its iOS and Android app in Canada, and is looking to shake things up in the Great White North by beating the big banks with far cheaper exchange rates.

For TransferWise, Canada is a natural market, citing immigrants who make up 20 percent of the population, while another three million citizens currently live abroad. Up to $30 billion is sent in remittances from Canada to developing countries annually. That figure doesn’t include the massive currency exchanges taking place every year with developed nations, like the U.S., U.K., European Union and Australia, among others.

Financial institutions have reaped the rewards in charging average rates of five percent, raking in annual profits of $200 billion alone globally, says TransferWise co-founder Kristo Käärman. Being an app-based brokerage, its aim is to drop the key barrier to foreign exchange by eliminating borders when it comes to money, and save its users 90 percent on fees, in the process. 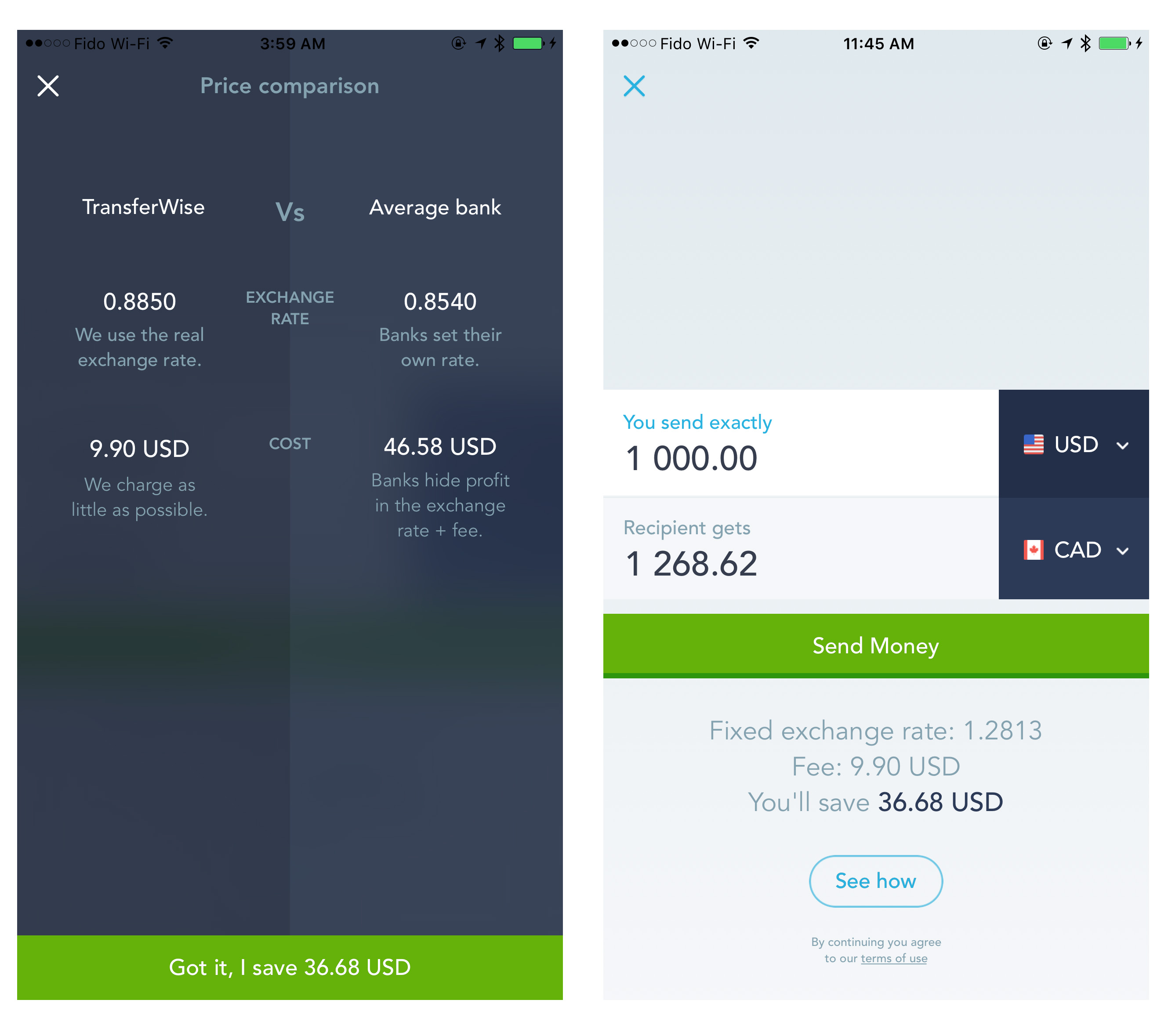 As with most financial products, there are a number of questions in how TransferWise does what it does. The company has been operating for five years and describes itself as a peer-to-peer foreign exchange service, “letting people send money abroad at the lowest possible true cost.”

That means sticking to market rates, or better known as the “mid-market rate,” with a flat fee of 1.2 percent on top. The process in sending money isn’t altogether different from conventional methods. The sender links their account to TransferWise, chooses the recipient, currency and amount through the app. The recipient doesn’t need to be a TransferWise user.

The peer-to-peer part of the equation, however, is a little unique. Rather than transferring the funds straight from the sender’s account to the receiver’s account, it’s sent to a “pool” TransferWise has in the originating country (basically their local bank account), and then deposited from another pool in the destination country (again, a local bank account). Since the money is being deposited from a local source and doesn’t need to be converted, it gets there faster and isn’t subject to inflated exchange rates.

In other words, because money is constantly flowing in and out, to and from TransferWise users, particularly from developed countries, the pools are always solvent. A “liquidity network” has been built on top of them to deal with any potential imbalances. “Whenever they go out of balance, we tap into the wholesale market, buying it in the same way the banks do. It’s a little bit more expensive, but we eat the extra cost,” says Käärman.

The advantage in doing it this way is reduced costs, speed and convenience, he adds, noting that moving pound sterling from the U.K. to France in Euros is as fast 17 seconds, a feat banks could never match. It won’t be that quick coming from Canada, but it should take about two days.

Canadian users will be able to send dollars to any of the 60 countries and 35 currencies TransferWise’s platform offers. Worldwide, there are currently 1 million users transferring about $1 billion (CDN) per month using the service.

The company is subject to various licences and regulations, including the Anti-Money Laundering Act, and while it monitors every transaction, it also abides by the regulations set by the the Financial Transactions and Reports Analysis Centre of Canada (FINTRAC), a government body that deters money laundering and financing of terrorist activities.

There is no limit to the number of transactions a user can engage in, but they do have to prove ownership of the account they’re sending from. “You can’t use this with other people’s money,” says Käärman. Where microtransactions have been used by other financial services for identification and approval, they are not required for TransferWise.

There are other basic limits to what can and can’t be transferred using the service. First, it has to be the local currency, so you can’t transfer U.S. dollars from a Canadian account to an account at an American bank, or vice versa, because there is no actual currency exchange. Second, you also can’t transfer foreign currency between Canadian banks, or even the same bank. For example, funds from a U.S. account at a Canadian bank can’t be deposited in a Canadian dollar account at the more favourable mid-market rate. Money sent with TransferWise has to be heading to another country.

There is also no support for PayPal and other online payment services, which may be disappointing for online retail sellers who accept multiple currencies and have to pay inflated rates and fees to transfer them to Canadian dollars.

There is, however, a possibility that online retailers or sellers could make use of the service by offering quick cross-border payments to their customers. Small businesses account for five percent of TransferWise usage in the U.S., though it’s primarily for suppliers, not customers. In equal measure, eBay sellers could theoretically present TransferWise as a payment option, though buyers would have to be the ones who sign up to send the money.

Bitcoin is also unsupported, though Käärman noted that the company is looking at what blockchain technology could bring to the table as it evolves.

Given that TransferWise only works when money is being sent abroad, the use cases are naturally better suited to those who often deal with foreign exchange. Some of the examples are easy to understand.

A French woman on an 18-month assignment in New York who is paid by her employer in Euros. An American expat working in the U.K. who is still paying off student loans in the U.S. Family members in the U.S. who are helping out relatives going through tough times in Greece. A Filipino nanny working abroad who needs to regularly send money back to relatives in the Philippines.

All of these are instances where foreign exchange would be a regular need, and cumulatively, they would each stand to lose out on a fair bit of money as time goes on with rates and fees. The app notes this with each transaction, listing the mid-market rate with the average one banks offer, and calculating the savings.

Another use case that may apply to anyone with a foreign account is sending money for local use. For instance, a senior couple going back to Italy for a trip could send money in advance to an existing account they had at an Italian bank using TransferWise, and then pull out the Euros from an ATM there. This could also be done with a trusted friend or relative in the destination country, thereby getting a much better rate for taking out cash.

That is, effectively, the only real way to make the app useful for cash, as it otherwise doesn’t offer any way to exchange currencies for hard currency for vacations or trips.

With an estimated $5-$10 trillion (U.S.) moved around the world every year between different countries, TransferWise is trying to address a “global problem” by eating into bank profits on foreign exchange rates and fees.

While not an apples-to-apples comparison, it feels similar to how startups undercut incumbent providers on roaming fees with cheaper rates and more favourable terms. Anyone who has been burned when exchanging money might be interested to squeeze more out of every dollar using TransferWise.

The app is free to download now for anyone looking to send Canadian dollars abroad.