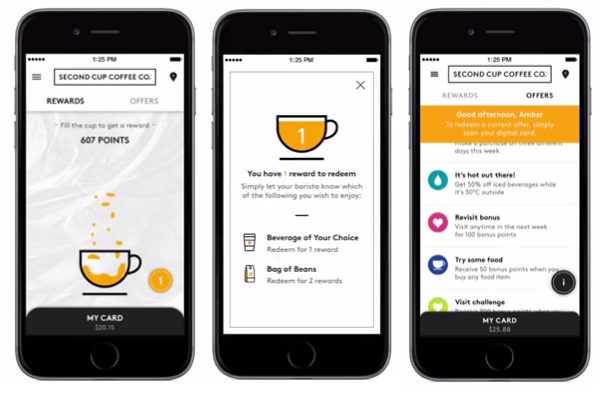 The company states that its new loyalty program and accompanying mobile app have been designed to “enhance its customers’ coffee experience by providing a simple and fast way to earn points, redeem rewards and be delighted by personalized offers and surprises.”

In a nice touch, a virtual coffee cup fills up as the user gets closer to 500 points. Second Cup calls this the “tap to drop” feature. When the time comes to redeem, a notification will appear on the device telling the user to alert their barista. From a mobile payment perspective, the Rewards app operates in a similar manner as many other rewards apps on the market. The company allows users to top up their card as well as see their balance. Paying for orders can be completed with one touch and also gives a glance at one’s complete transaction history.

Second Cup will also bring special offers and “tailored surprises” to Reward users, such as new drinks and various levels of point incentives, which will arrive via notifications.

The app also has a store locator and the option to get a free beverage on one’s membership anniversary date.

Built in Toronto by BNOTIONS, the Second Cup Rewards app is both fast, native and well designed.