Hub connects the family with shared lists, calendars and photos 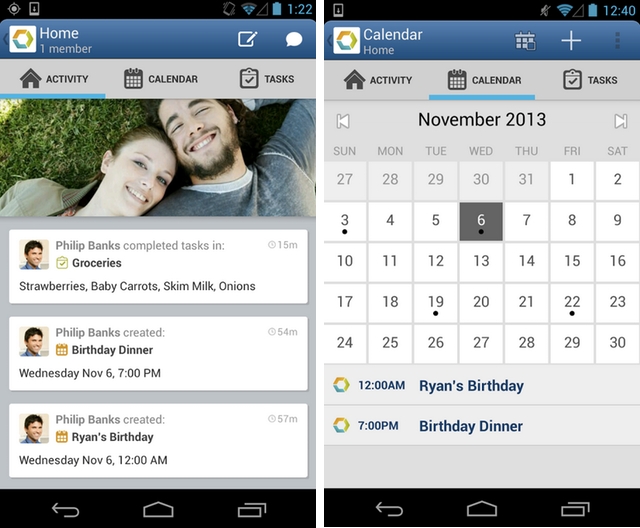 There are a number of apps dedicated to keeping the family organized. When all members, including the kids, have a smartphone, it makes sense that startups would take advantage of the real estate, keeping everyone abreast of dinner plans, hockey games, shopping lists and even the occasional family photo.

Among this new breed is an app called Hub, which caught my eye recently thanks to an iOS 7-friendly redesign and a capable Android counterpart. The idea is simple: once on-boarded, add one or more contacts to a “Hub” to begin sharing calendar entries, notes, photos and list entries. The List portion already comes pre-populated with three categories, ToDo, Groceries and Shopping, and adding or removing one automatically pushes the synchronized data to the other members in real time.

Unlike most organizational apps in the same category, Hub’s main advantage is its ability to plug into your existing iOS or Android calendar: entries are present by default, and can be explicitly shared with other members of the hub with one tap. This is incredibly useful for those who want to avoid keeping track of both a cloud-based Google or iCloud calendar and another separate one within the app.

Though the free version of Hub gets the job done, its true usefulness is exposed with a $44.99/year (or $4.99/month) Gold account, which applies only once for all members in all hubs. With a Gold account, users can share recurring events and tasks; set due dates for tasks; assign tasks to other members in a hub; and leave comments under notes and shared photos. I wish the free version had a bit more functionality, and I find the annual price a bit high for what you get — it’s the same price as Evernote Premium, which does a whole lot more, and is available on many other platforms — but it’s a good start. Another item on the wishlist is a web interface, but this is a new startup, so one thing at a time.

Hub appears to be an evolution of Iron Ark’s previous offering, SimplyUs, a similar app meant for couples. The couples organization space has exploded in the last few years, with big-name startups like Avocado and Couple raising significant amounts of funding.