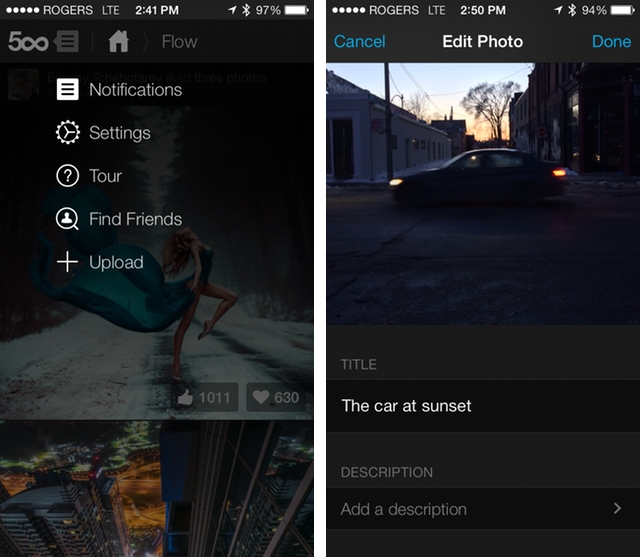 Toronto-based 500px has superseded Flickr for many people as the go-to community for professional photography. Until today, though, its mobile apps were built for consumption, allowing users to see popular content or browse the various categories within.

Through a minor update to its iOS app, 500px has quietly enabled mobile uploads, likely as a way to experiment with quality before rolling it out to other platforms. Unlike Facebook, or Flickr for that matter, it’s not possible to upload multiple photos at once, though individual photos can be added to existing Sets.

It’s unclear whether this is a precursor to more extensive mobile upload integration, or if 500px wants to encourage users to transfer photos from cameras without using a computer as an intermediary. Sony’s most recent line of NEX and Alpha devices supports WiFi transfer through PlayMemories, which removes the need for a USB cable and laptop.

The app, which is also optimized for tablets, doesn’t offer any editing features, either, so photos will need to be modified in another app beforehand. It’s clear 500px wants its community to be a showcase for standalone (and complete) works of art, but this move to make mobile uploads easier will likely not diminish the overall quality of the content.