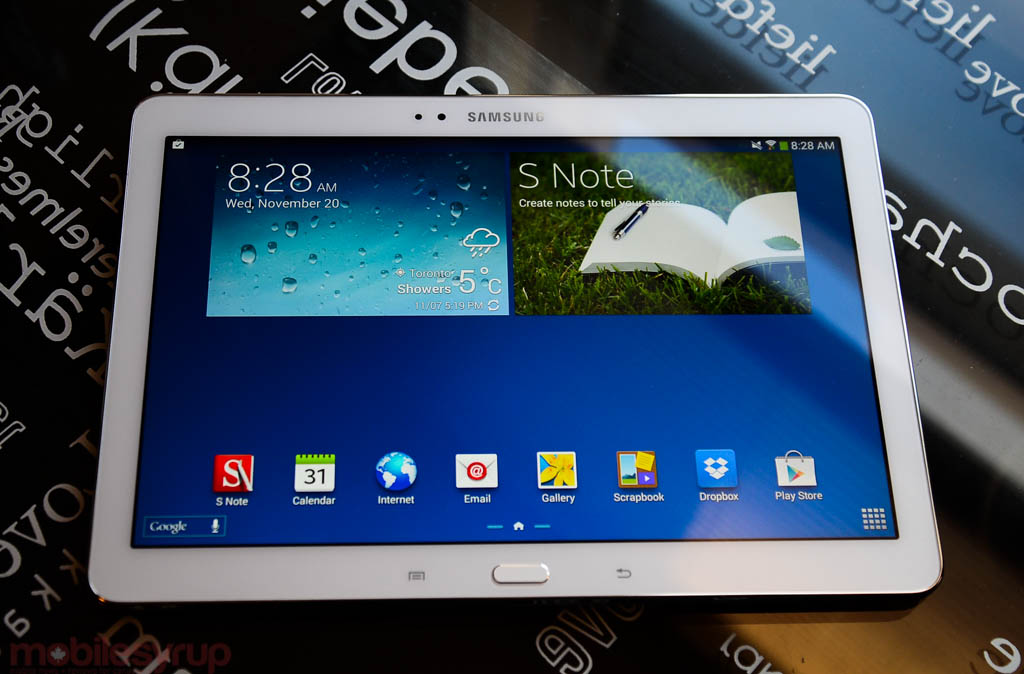 The Galaxy Note 10.1 successor, aptly titled “2014 Edition,” is the best Android tablet you can buy, as long as money isn’t a concern.

It’s fast and fluid, with a stunning IPS display and modern processor, excellent built-in apps (and support for a few third-party exclusives), and a lightweight, sturdy design. This is the tablet we’ve been waiting years for Samsung to create, and it comes at a time when the Android tablet ecosystem is coming into its own.

But with a $599 CDN price, does Samsung ask too much from its customer base? And even if it does deliver the closest true multitasking experience Android can affect, is it a better choice for power users than the more versatile Surface 2, or a similarly-priced iPad Air? Let’s take a look. 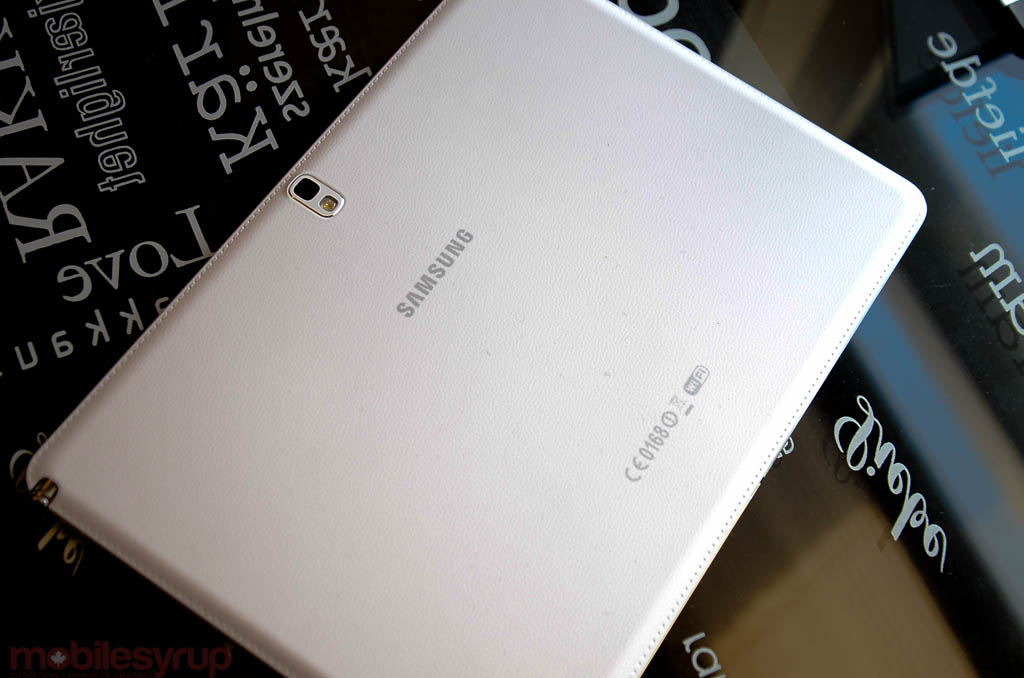 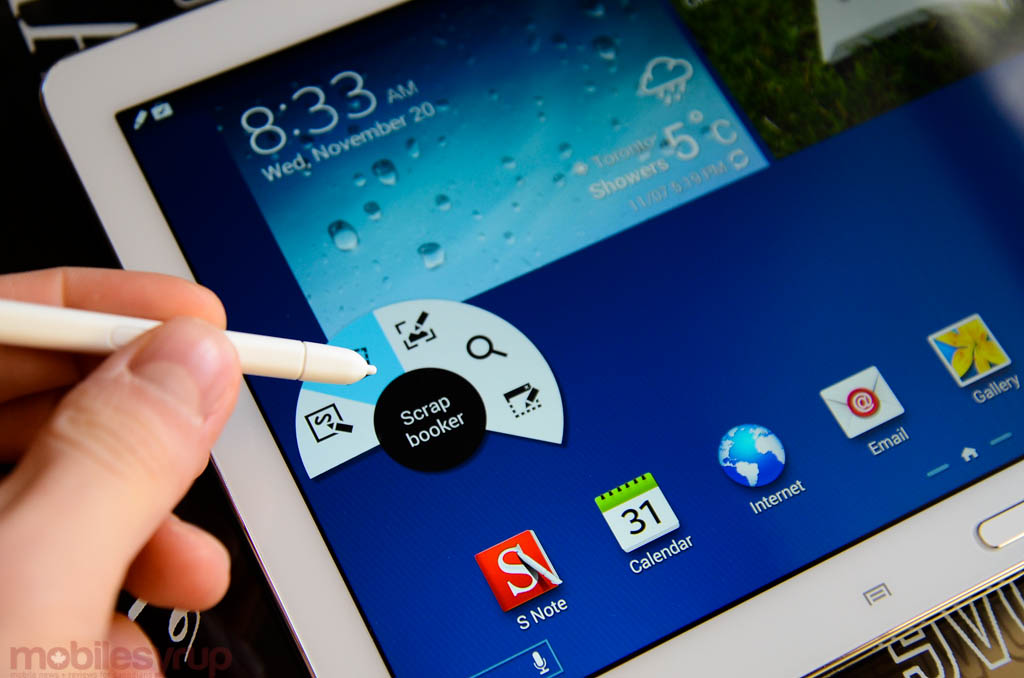 There is a lot to like, both in terms of looks and feel, in the Note 10.1 2014 Edition (heretofore referred to as the Note 10.1 for brevity’s sake). While it does appear to be an enlarged Note 3, the faux leather backing and ostentatious stitching work better on a device of this size, affecting a more aspirational tone.

At 540 grams, it’s extremely light, but also sturdy, with few areas of compromise. There is little room between the screen and the bezels, which keeps the large tablet compact and relatively portable. This also works to minimize the “long-and-thin” widescreen effect that pervades the 16:10 Android tablet ecosystem, though at times holding it in portrait mode felt like an unfortunate hack. From the landscape-oriented navigation buttons below the screen to the placement of the microUSB and power buttons, Samsung intended for you to consider the canvas as stationary. 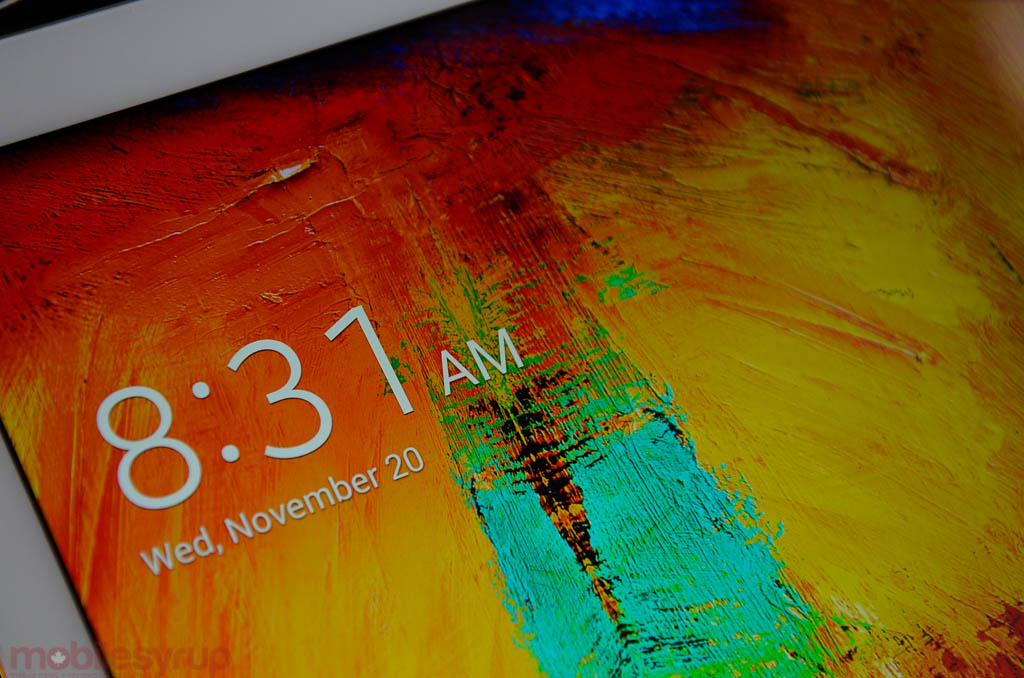 The screen is beyond sharp, and though it doesn’t stand out like the Nexus 10 did a year ago, it’s still one of the cleanest examples of an IPS display we’ve seen in recent memory. Colour saturation is superlative, and the 300ppi pixel density makes reading and surfing a treat. Similarly, the accurate colour gamut allows those using the S Pen – significantly improved over previous Note slates – to more accurately portray their masterpieces. Viewing angles, brightness and black levels are also excellent, though contrast doesn’t seem to be as good as the equivalent iPad Air. 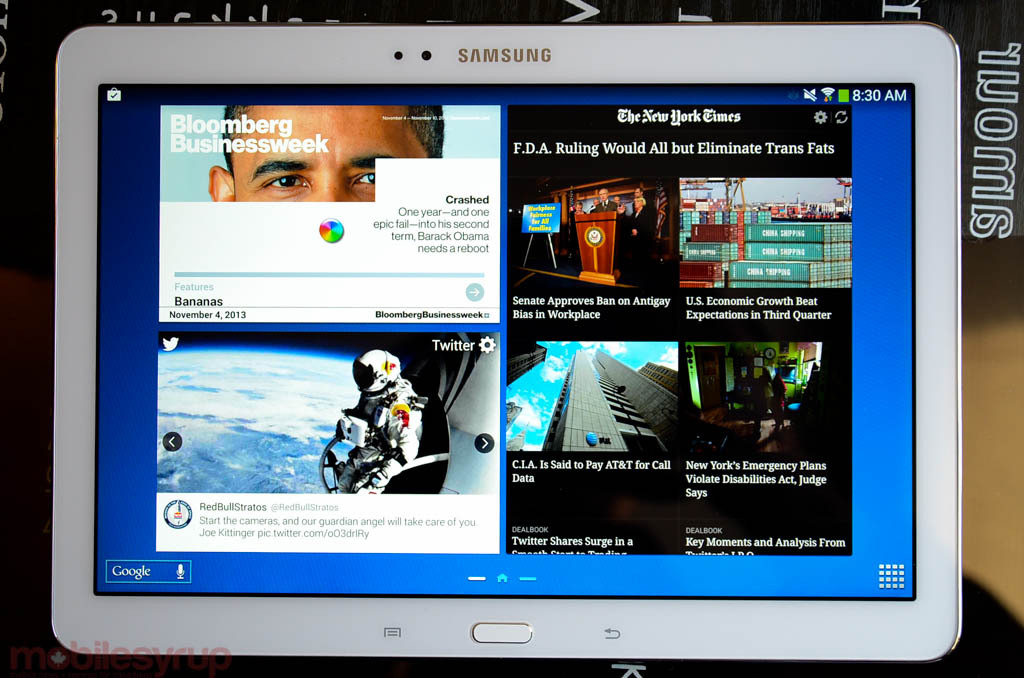 Buyers of the Note 10.1 will likely take advantage of the included S Pen, which has been tailored for the tablet’s Android 4.3-based TouchWIZ software. Users will be prompted to take advantage of the myriad pen-optimized apps via Air Command, which debuted on the Note 3.  And while we found navigating, annotating and sketching a joy on the 5.7-inch Note, it’s a truly wonderful experience on the larger tablet.

I began relying on S Note, Samsung’s included note-taking app, to replace my retinue of various paper notebooks, comfortable with the notion that they would be uploaded and searchable from Evernote. Similarly, Samsung’s newest implementation of Multi Window, the ostensible Android multitasking layer that pairs two apps side by side, has been improved to allow users to share information; drag a photo from the Gallery into Hangouts, for example, to share it. 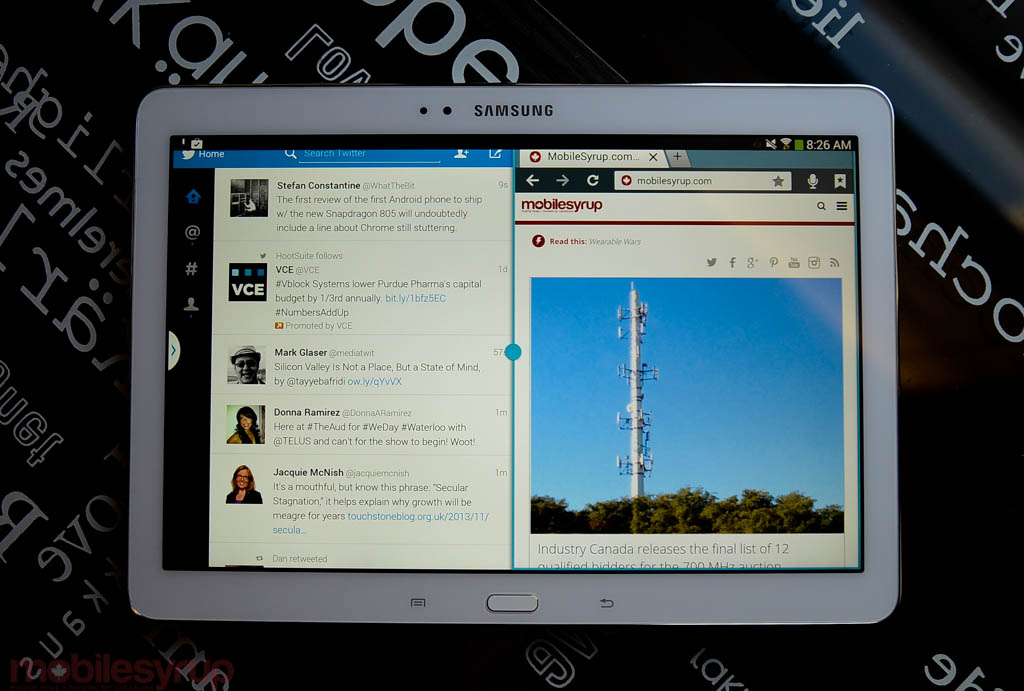 Multi Window proved to be only slightly less versatile than Windows 8.1’s screen pinning mode, and continues to improve with each iteration. I constantly used it to browse the web and monitor Twitter at the same time, and users can save specific combos to launch again in the future.

Performance tended to be good throughout the OS, with only the occasional stutter when playing games or loading apps. Outfitted with 3GB of RAM and 32GB internal storage, the Note 10.1 is approaching the power and versatility of various Bay Trail-powered Windows tablets; paired with a good case and a Bluetooth keyboard, I wouldn’t be surprised to see it in the place of some Windows RT hybrids, which lack Android’s extensive app and game libraries. 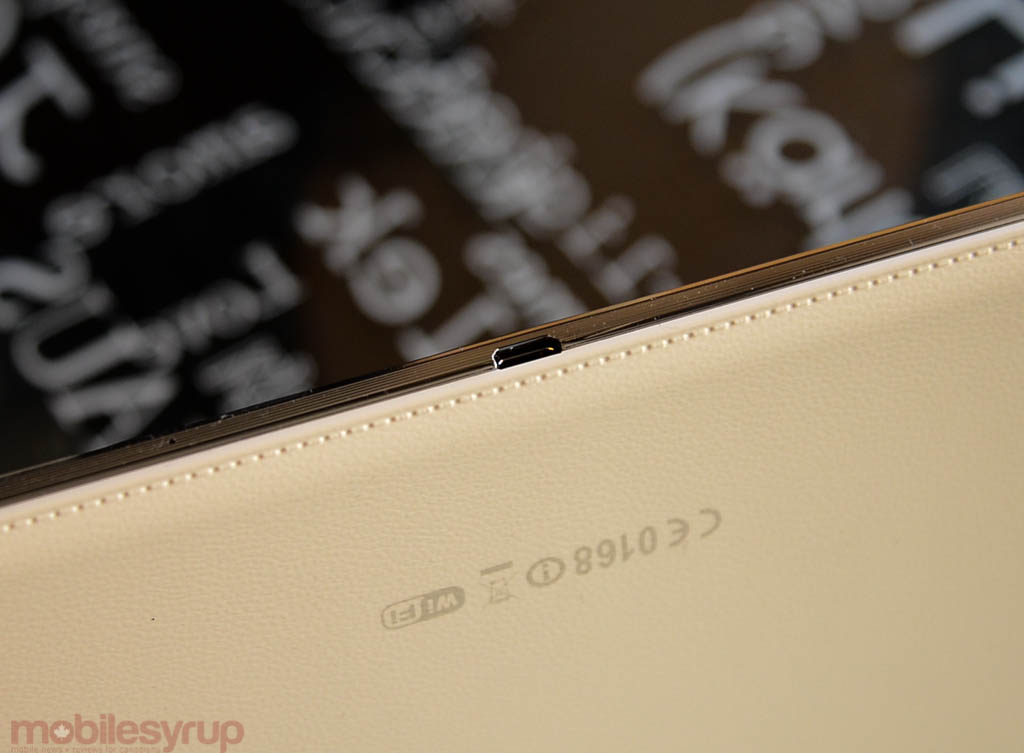 Though the Note 10.1 does a lot of things well, its price is the main pain point; it is cheaper than the equivalent iPad Air (which is $619 for the 32GB version), other OEMs, from Asus to Toshiba to Acer, offer better values without all the extra amenities.

Specifically, without the added S Pen, the Note 10.1 is merely a very good, very fast Android tablet, and there are plenty of those around. Only Samsung feels they can charge what Apple charges for its high-end tablets, but the Korean giant doesn’t realize that there are iPads and then there is everything else. The Android tablet experience, as good as it is here, doesn’t come close to presenting the platform’s best traits; the app selection is weak, and the 16:10 aspect ratio makes one-handed use awkward at best and untenable at worst. 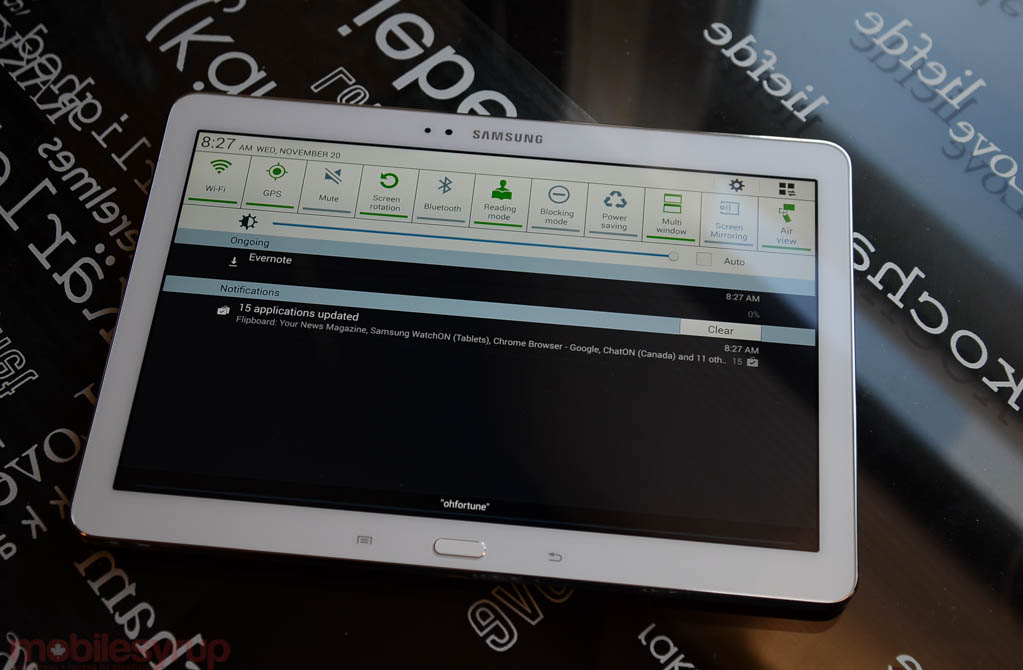 Granted, the app selection on Android tablets is improving, and Google is doing plenty to hold developers to account for their laziness — we are three years on from the introduction of Android tablet assets – but, ultimately, OEMs like Samsung are paying the price. Samsung has attempted to take matters into its own hands, too, by partnering with services like Flipboard and Twitter to offer custom interfaces, but it’s still not enough.

On the flip side, Samsung should not be encouraged from treating Android as its personal content canvas; everywhere you turn, it seems like the company takes another opportunity to push Samsung Apps, its alternative (and scarcely-populated) to Google Play. 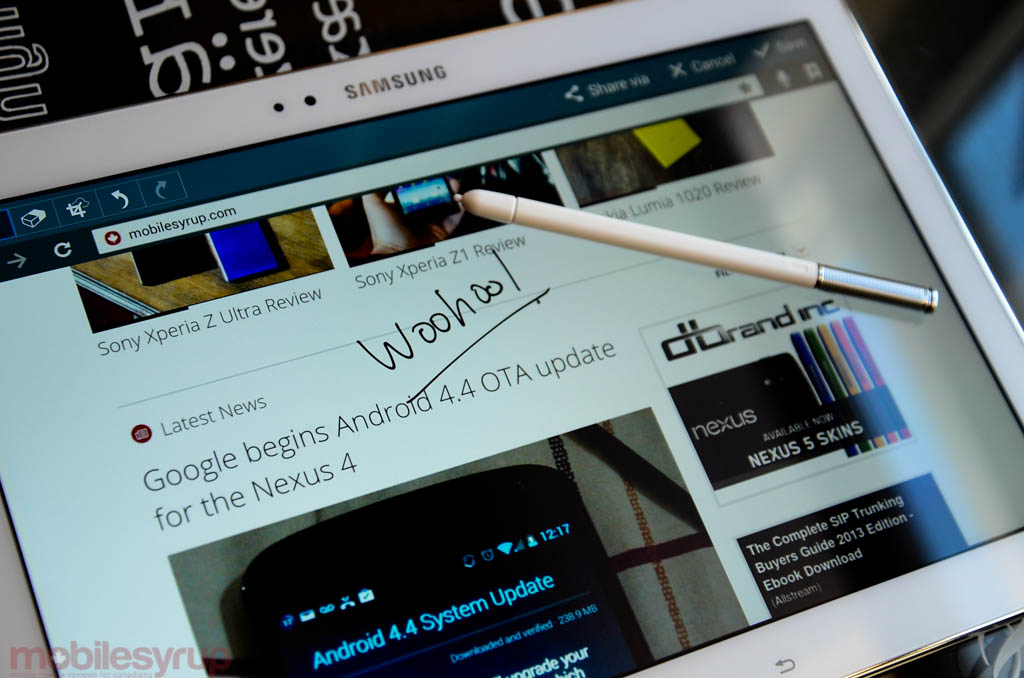 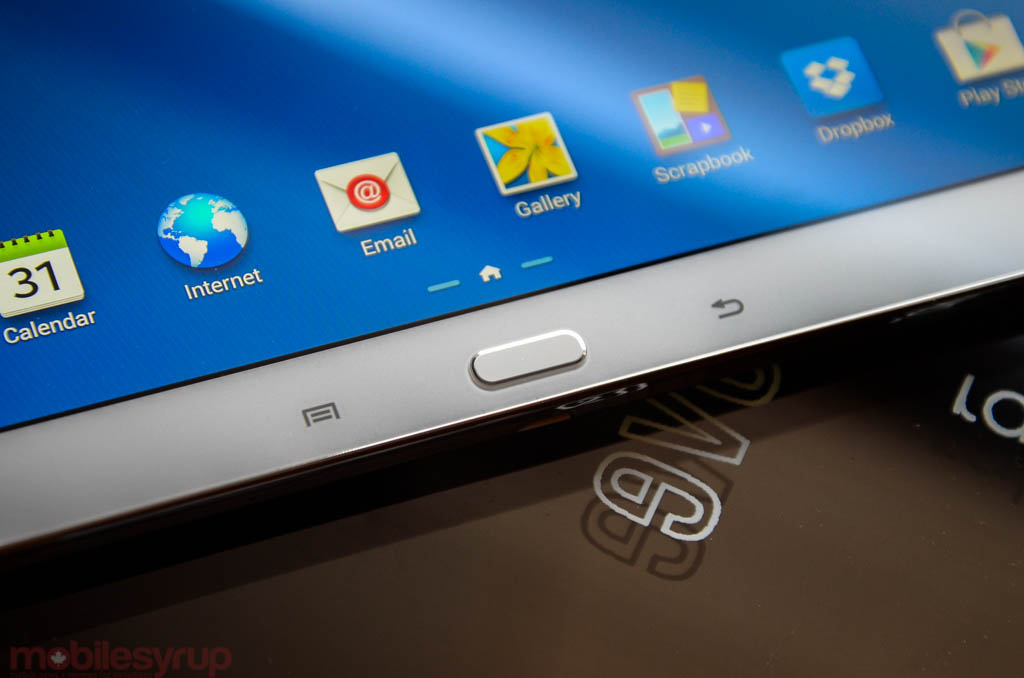 Samsung has crafted what appears to be the best 10-inch Android tablet experience on the market right now. The S Pen features that were useful on the Note 3 are essential here, and the Note 10.1 should be considered by anyone who needs pressure-sensitive pen input.

At $599, it’s cheaper than the equivalent iPad Air, but still far too expensive for the average Android tablet buyer.  Discounted by $100 or $150, I’d say it’s a no-brainer, but at the moment, with this price, I’d only consider it if budget is no concern.