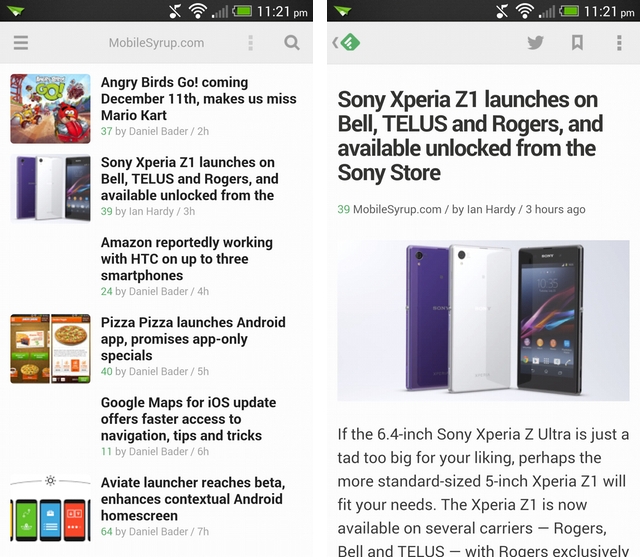 Feedly, the go-to RSS reader now that Google’s own product is gone, has been updated to version 17 on Android with some pretty significant improvements.

Not only is the app three times faster to load, but navigation and in-article readability has been significant improved. We immediately noticed a big boost in loading and refreshing speed, some of which can be attributed directly to Google’s intervention — the company thanks the Android team for their “coaching.”

Version 17 also has a redesigned widget, which looks a lot better and actually refreshes when asked; the old one was completely useless in this regard. Along with updated Facebook SDK integration, Feedly has enhanced search for Pro users and brought support for Samsung’s Galaxy Gear.

Curiously, the changelog includes “Support for Android Kitkat,” though it’s not clear what that means at this point. We were expecting the Nexus 5 to be released this week, so Android 4.4 should be coming any day now.

While Feedly has been busy updating its core Android app, alternatives like Press and gReader have integrated Feedly’s API, bringing much the same functionality in a different UI. Press is arguably a better-looking and more functional app, but at $3.08 it’s a bigger investment than Feedly, whose core product is free to use.

Update: It looks like Feedly has removed the “Support for KitKat” line from their change log. Very interesting, especially since the new OS is rumoured to be detailed in under two weeks.