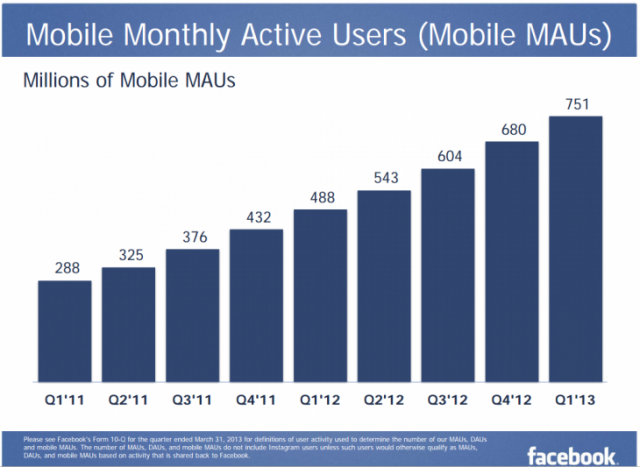 Facebook issued its first quarter results for the new year and made some pronouncements on the state of the mobile web and mobile advertising in general.

The company, which went public in 2012, now has 751 million monthly mobile users, up 54% from the same period last year. Considering that number comprises 68% of the company’s 1.11 billion total monthly active users, that is an astounding number.

More impressive is the rate of growth: that 54% uptick in mobile users is much higher than the 23% increase in total active monthly users.

So while it’s not safe to say that Facebook’s growth has completely stopped, it only grew some 4.75% since last quarter, while mobile users were up nearly 11% in the same period. Advertising revenues have also seen a slight bump from mobile users; 30% of Facebook’s advertising revenue now comes from mobile devices, up from 14% in Q3 and 23% in Q4.

Facebook’s mobile apps are among the most popular on its respective platforms, and with an increasing number of “sponsored posts” littering users’ news feeds, it’s only a matter of time before that 30% number increases to over 50%.