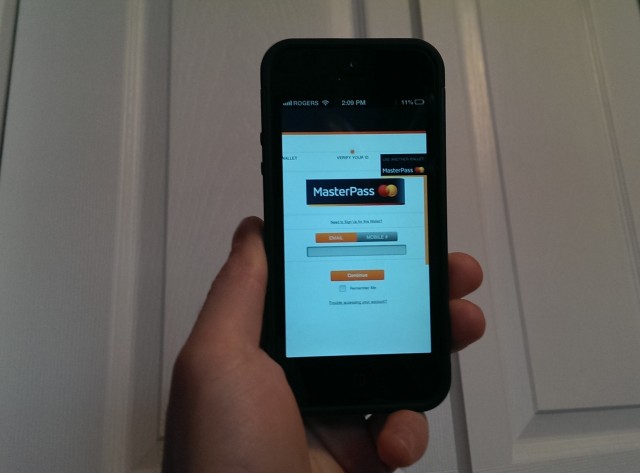 MasterCard has launched its long-awaited payment platform, MasterPass, to facilitate mobile payments on the web and mobile devices.

At its core, MasterPass is a locker, able to hold the information of up to 25 credit cards, even from issuers other than MasterCard. “[We] are a technology company that specializes in payments,” said Jason Davies, Vice President of E-Commerce for MasterCard Canada, during a launch event on Tuesday.

MasterPass can enable any number of payment methods, from single sign-in on partner site Grocery Gateway, to NFC- or Bluetooth-based mobile processing like Rogers’ Suretap product.

“The goal is to make every connected device a commerce device,” says Davies, emphasizing that MasterPass is a fully-realized payment ecosystem rather than a mobile payment processor or end-of-transaction security verifier. It does it all, including giving banks and card issuers the option of white labelling the service for their own purposes. One of the first bank partners, BMO, will use MasterPass as the backend infrastructure of its own online payment system.

The vertically-integrated solution promises to ease online and mobile payments by giving users a way to pay for products quickly and securely using about half the steps of a traditional online vendor checkout. Beginning with three partners — WagJag, Grocery Gateway and Porter Airlines — the company will expand to 800 by year’s end and 2,800 by the end of 2014. Key verticals will be travel, eBooks, online and mobile retail and gaming; MasterCard wants to be the processor behind your favourite in-app purchasing system.

MasterCard is launching MasterPass first in Canada, claiming its population has a good grasp on digital payments and are traditionally early adopters in the space. There are also millions of credit cards and, with the introduction of Visa debit (which MasterPass also supports), new ways of paying for goods online. Canadians also have one of the highest rates of mobile payments in the world, and MasterPass aims to make it easier to finish buying what you started on your phone or tablet. MasterCard reps said that 23% of online shopping carts are abandoned because the registration process is either too long or inaccessible on a mobile phone.

MasterPass also takes the onus off online merchants to store your sensitive credit card information; MasterCard uses multi-factor authentication and advanced server-side encryption to ensure that all your data is safe. Re-entering your payment information is also unnecessary once a merchant signs up for MasterPass. Down the road, the service will also hook into existing loyalty programs so users can be incentivized to use MasterPass over the competitors.

Being so new, there are no current plans to expand to fit into the nascent mobile payment infrastructure in Canada, which itself is facing a barrier to adoption. Rogers and CIBC recently announced an expansion of its NFC and secure SIM card-enabled Suretap program to encompass a number of new phones, including some Android devices, but it is still limited to CIBC Visa cards.

MasterPass is a different product to MasterCard’s PayPass system, which enables single-tap payments on select terminals up to a specific dollar amount.

For more information on MasterPass, head on over to MasterCard’s website.