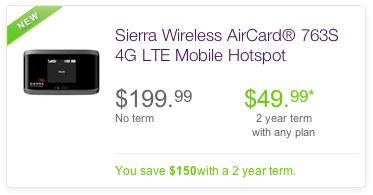 The Sierra Wireless AirCard 763S LTE hotspot has sure made a trek around our Canadian carriers. First Rogers released it, then Bell recently launched the device, and now it’s TELUS’ turn. This little gem can make a WiFi hotspot for 10 devices and also connect your to TELUS’ LTE network – which should give you average download speeds between 12 to 25 Mbps. When your out of the LTE coverage you’ll fall back to their dual-carrier 42Mbps network . The price ranges from $200 outright down to $50 on a 2-year.