Ad-supported Android apps are battery hogs, according to study 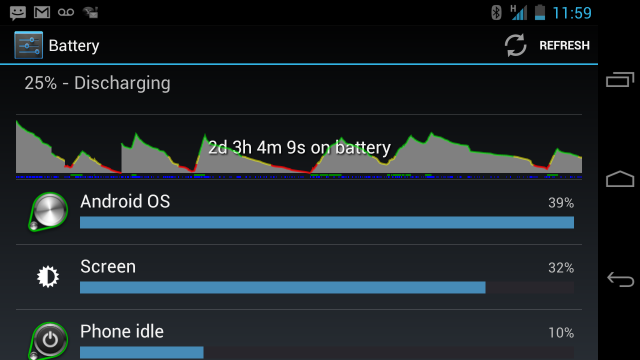 A study out of Purdue University, together with Microsoft, has exposed the sinister side of ad-supported apps. The team took four common Android apps — Angry Birds (free) and NYTimes among them — and figured out that even after all the main assets were loaded, in this case textures, sounds for Android Birds, the actual text and images for NYTimes, that the apps stayed connected to the internet for extended periods of time.

Turns out they were contacting ad servers, along with the phone’s GPS, to bring down location-based ads. The vast majority of battery life used — up to 75% of a single app — was due to this constant pinging of the ad servers.

Android has the ability to stay connected to an internet server long after the request is finished; this is kind of like keeping a door ajar in case you need to go through it again. The problem arises when apps take advantage of this open door policy by “checking in” with the remote server too often. Some apps even mistakenly leave this door open even when the app is closed; Facebook and Android’s own Mail client were two such perpetrators.

More importantly, ad-supported applications such as Angry Birds (free) may be costing you more money in the long run than merely paying 99c for the app. While that doesn’t sound logical, as you can always recharge your device if it gets low, lost productivity due to poor battery performance is a growing issue amongst smartphone users, and there is a growing industry of third-party battery manufacturers picking up the slack.

Not all apps are so wasteful with their energy expenditures. The research found that the vast majority of free apps shut this door when they’re supposed to, with most of the battery usage going towards I/O functions like the screen digitizer and accelerometer.

The full research paper is quite lengthy and complicated, so let us sum it up for you: if there is a paid alternative in the Play Store, and you are addled with poor battery life, maybe it’s time to pony up that buck or two. It could save you more in the long run.

And if you’re worried that Microsoft spiked the punch, so to speak, don’t be. They’re commissioning a similar study with Windows Phone apps next.