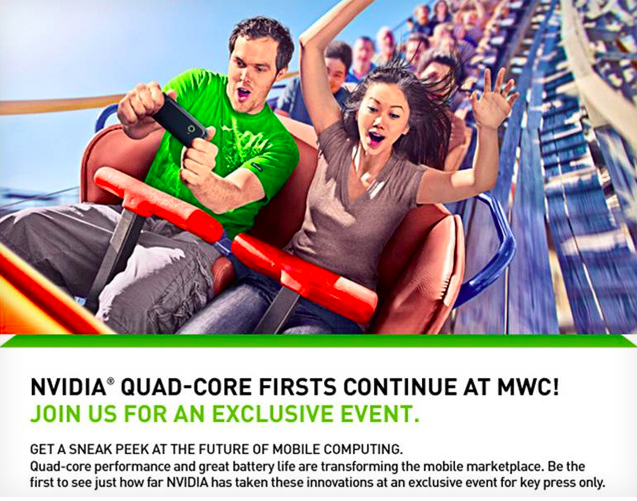 Nvidia has sent out a press release for an “exclusive event” during Mobile World Congress this month, promising “quad-core firsts” and “great battery life.”

This pretty much confirms what we already suspected: that companies like LG and HTC will be offering Tegra 3-powered smartphones are the convention, though it’s unlikely Samsung will be taking part in the quad-core festivities.

It will definitely be interesting to see how the Tegra 3 chipset, which is only available in the Asus Transformer Prime tablet in Canada, translates to smartphone use. The chip is built with a 40nm process, so it doesn’t have the power-efficiency advantage over the upcoming Qualcomm S4 series, which is built on a 28nm process. Tegra 3 does, however, contain a fifth “companion” core which allows core features to be maintained while the screen is off, such as music listening and voice calls while the rest of the four high-energy cores are sitting idle. The idea is sound, and we found it to do good work in our Transformer Prime review, but it remains to be seen how such architecture translates to the smartphone.

Source: Android Central
Via: The Verge