QNX CAR 2 application platform to be showcased at CES, “scheduled for general availability in mid-2012” 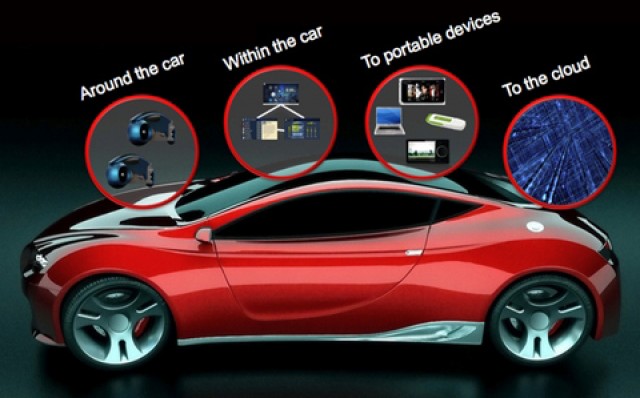 RIM acquired QNX Software Systems back in April of 2010 and integrated their OS into the BlackBerry PlayBook. In addition, QNX is a huge player in the automotive and “infotainment market”. A press release just went out stating they’ll be showcasing the latest version of the QNX CAR app. QNX has pimped out a Porsche Carrera and will display “how one-touch Bluetooth pairing using Near Field Communications (NFC) eliminates the hassle of pairing the driver’s phone to the car. And experience how conversational voice recognition and in-vehicle controls enable drivers to use the car’s infotainment system easily and conveniently”. That sounds promising. This “cloud-connected concept car” will have front and rear BlackBerry PlayBooks and feature the apps Vlingo, Poynt, Weather Network app, Internet radio from Pandora, NoBex, Slacker, and TuneIn.

Probably the best news in the press release is the demo of the QNX CAR 2 application platform, something the company says “is scheduled for general availability in mid-2012”. This works off HTML5 and “will help enable automakers to keep their vehicles fresh with new content, address consumer demands for the latest mobile apps, and leverage a huge developer community”.

How’d like to bet that RIM has signed a deal with a car manufacturer – say Ford, Chrysler or GM – that will make the BlackBerry PlayBook the hub of the car. So you’ll eventually use your PlayBook for maps/navigation, clock, stereo, TV/Video, etc… This would give RIM a much needed bump and new revenue stream, especially if it’s “scheduled for general availability in mid-2012”.