Mayor of Toronto admits to using his cellphone while driving, but will not be charged 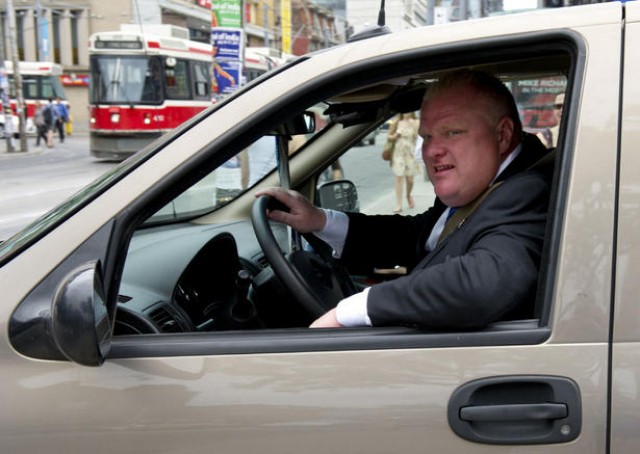 “I was driving east on Dundas St. last night at around 9pm. towards Spadina Ave. and who should I see driving beside me but our new mayor, Rob Ford, talking on his cell phone while driving !!! My 6 yr. old daughter and I have a game of thumbs up or thumbs down when we like or dislike something, so when we get to the intersection at Dundas and Spadina, we aptly give him a thumbs down and say, “get off your cell phone!!” Rob Ford, our mayor, then gives us the finger, I roll down my window and again shout, “get off your cell phone!” He keeps giving us the finger and I can see him mouthing swear words through the window. I only wish I had taken a picture with my camera but as you know that would be illegal while driving a vehicle!”.

True, using a cellphone while driving is an illegal offence in Ontario. The law went into effect back in October of 2009 and the Government and the Police have been working hard to make the streets safer, cracking down and laying fines to those who disobey. The fine for breaking the law is a minimum $155 to a max penalty of $500 (plus demerit points).

However, Mayor Ford, even though he has acknowledged he did in fact use his cellphone while driving will not get fined for his actions. Police spokesperson Mark Pugash stated that “We haven’t had a case where we felt it was necessary or appropriate to take the matter any further. There are some logistical problems with doing it after the fact but if it was a situation where we felt it was appropriate we’d certainly consider it… it would be “a very time-consuming and ineffective use of resources”.

Mayor Ford is clearly not the best role model for safe cellphone use. What do you think, should he be charged?